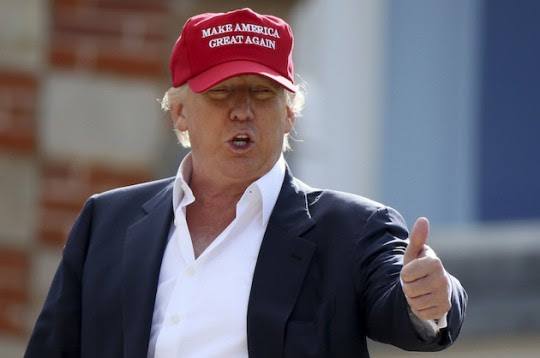 .
Winners gonna win. (AP)
.
Since announcing his candidacy in June, Donald Trump has slashed and burned his way to the top of the Republican field. Trump, who has a gift for telling it like it is, has pulled no punches in his successful quest to prove his superior leadership skills to the everyday American voter. Over past several weeks, Trump has attacked: China, Mexico, Macy’s, ESPN, NASCAR, John McCain, the media, lobbyists and Republican donors, even the Koch brothers.
Earlier this week, the candidate lashed out at Harvard students, calling them “fraudsters and liars.” Most Americans happen to agree with this accurate statement. If Trump is serious about achieving his dream, and America’s dream, of a Trump presidency, here are some other suggestions—presented in Trumpian rhetoric—for groups to attack in order to solidify his support.
.
Cyclists
.
Look, the cyclists—I drive a Cadillac, American made, only the best; actually, I have a driver, great guy, one of the hardest workers I know and he’s very, very well-paid; why would anyone ride a bicycle? Boo hoo, I’m poor, I want to lose weight, get in shape. I hear this all the time from fat people, as if riding a bike is going to make up for the fact that you’re ugly—and let’s be honest, nobody; when’s the last time you saw a good-looking person riding a bike? The helmets, not very flattering, and don’t get me started on the clothes. The colors, it’s just gross, too flashy, like they’re trying to compensate for something. Wouldn’t you? They’re losers; Lance Armstrong, he cheated; I supported his charity, and many, many others, by the way, but he cheated; what was he—we play by the rules in this country; he gave America a bad name, trying to win a competition in France of all places; the French make terrible, terrible cars, by the way; I don’t know anyone who drives a French car; America used to make great cars until China—we don’t know how to negotiate with these people, it’s killing our jobs; you think a few bicycles are going to save the environment?
.
Soccer fans
.
America should be the best. You heard it, the best. And our women our great, great players, they beat all the other teams and they look fabulous. But the men? They’re losers, they just—and by the way, I’m ahead in the polls. I’m not a soccer fan, so what? I love America; why do we—and these people, these ugly, ugly people, with their scarfs and their study abroad, and the FIFA, all the corruption, I don’t—they pretend to be patriots, they’re hideous; I’m a patriot, I’m running to talk about the issues; we truly, truly need to get rid of the politicians; they don’t know what they’re doing, they just don’t; listen, have you seen the way men play soccer? It’s a disgrace, it’s shameful, not even—the flopping, the faking, the crying; who cries? Trump doesn’t deal with the criers, that’s not—I’ll tell you who will be crying is the Chinese after I’m done with them.
.
Mumford & Sons
.
What is this? I asked my staff—I have a very large staff, lots of young people, tremendous excitement; I asked them, who are these guys, what are they British? Trying to sound American? We used to be a great country. Mumford, these guys are clowns—they think I’m a clown, the media; they can’t stand it, they like the Mumford; every single poll I’m number one, what do you know? London is a fantastic city, very classy; I don’t—these guys wish they could stay at my hotels, they’re dirty; never going to happen, I said,”What is this music?” No one listens to this, they’re probably Obama voters. Neil Young is a loser, by the way, I don’t—he’s mad that I used his song, what do I care? He’s a failure, I’ll find something else; not this Mumford crap which sounds like a herd of goats ran into the electric fence on my estate in Florida.
.
That dentist who killed Cecil the Lion
.
I love my dentist, great guy; he comes to me, by the way, still does house calls, super classy; he almost—Obamacare is killing his profession, he tells me. Just killing—I’ve got great teeth, so he doesn’t have to work very hard, makes a lot of money but Obama wants to put him out of business. We’ve got to replace the law, it’s killing—I’m going to do great things for this country. We need to be great and have great healthcare. I’ll make sure—people tell me, they say “Donald, you got such great hair, like a lion,” that’s what they tell—look, I like animals, I love them. This guy, I don’t care that he’s a dentist, he went to Zimbabwe; they wanted me to build a golf course there, I said no way; I said no way, there’s no money; so he killed a lion, what did he—used a bow and arrow; who does that? I’m a gun guy, I’m the most gun-friendly candidate in the race.
.
Gawker
.
Pathetic; we’re talking about losers; they can’t stand Trump, I’m leading—they think they’re so smart, they published my cell phone number; they got it wrong, so what do they know? But they tried because they’re frauds who like to pick on innocent people; I have dozens of phone numbers, dozens; I do deals all over the world, and they think—have you seen their faces? Ugly. No class, either; they want to go after Trump; did they—I went to Wharton, by the way, and did very, very well. I know business; Gawkers is a—sure, they live in Brooklyn with their chain wallets and skinny ties, the beards; they’re gonna vote for Sanders, who, by the way, Sanders is right about the Chinese. The Chinese would have shut down Gawker years ago, so there’s that.
.