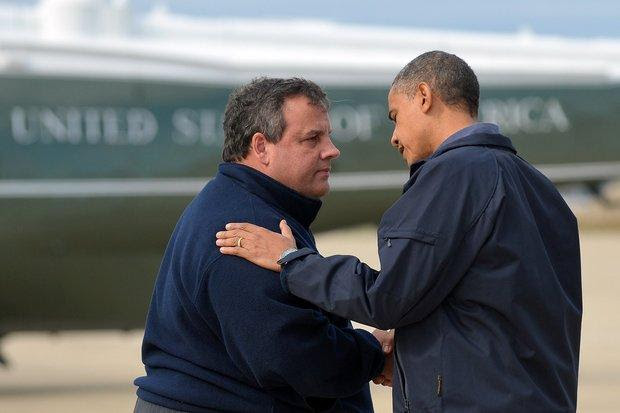 
by Deroy Murdock
NATIONAL REVIEW
February 4, 2016
.
They say that elephants have fantastic memories.

That may be why some Republicans still remember the night that Chris Christie killed the Romney campaign. And they still hold it against him. In late October 2012, the race between GOP nominee Mitt Romney and Obama was tightening. An October 27 Business Insider headline read: “Gallup: Romney holds five-point lead, Obama approval rating slides.” Romney seemed to be on a roll. “Then Hurricane Sandy hits,” one top Romney adviser remembers. After the Jersey shore was devastated on Monday, October 29, “Christie starts his bromance with Obama,” this former aide says. At one point Pufferfish gets a ride with Obama on Marine One. That apparently made a major impression on him.” Pufferfish was the internal code name that Team Romney used while vetting Christie as a potential running mate. Sandy knocked Romney off the air for the final week of the campaign. Rather than engage in divisive, partisan behavior, Obama rose above the fray, donned the First Windbreaker, and did his job. RELATED: Chris Christie’s Rise Is a Triumph of Style over Conservative Principle It didn’t hurt the Democrat nominee that, at the same time, “Pufferfish was humping Obama’s leg,” as the Romney aide put it. “Pufferish was very upset that he did not make it as Romney’s V.P. pick.” This adviser thinks that Christie was driven, at least in part, by revenge.

But DeVore says he was disturbed that October by “the spectacle” of Christie engaging in “his kumbaya with President Obama when he came to the storm area.” TV cameras captured Christie not just greeting Obama as the governor of a disaster zone. Instead, he seemed to fawn over Obama. Welcoming the man who holds the federal emergency-relief purse strings would have been one thing. Looking consumed by a schoolboy crush was another. “A lot of people think that this was payback for not being picked as the vice-presidential candidate,” DeVore says. He met recently with a large group of Golden State Republicans. There were supporters of every GOP contender, except Christie. Referring to Christie post-Sandy behavior around Obama, DeVore says, “People still certainly remember that.”

More Chris Christie Christie Takes a Tougher Tone against Michelle Obama’s School-Lunch Reforms In Iowa, Christie Charms Skeptics Why Chris Christie Is Rising in New Hampshire Ever magnanimous, Romney evidently has turned the other cheek. He has invited Christie to speak at his annual policy gatherings in Deer Valley, Utah, and even hosted him as a house guest.

But other Romney supporters have longer memories and cannot forget the night that the governor of New Jersey turned his back on Romney and just may have cost him the White House. The Romney campaign had many other problems that contributed to its defeat. But this lack of support from Christie, which would have generated significant, last-minute, positive press — sure didn’t help.

Americans and the world today suffer the consequences, at least in part, because Chris Christie could have taken a five-minute helicopter ride to stop Obama. And he didn’t.

— Deroy Murdock is a Manhattan-based Fox News contributor and a media fellow with the Hoover Institution on War, Revolution, and Peace at Stanford University.