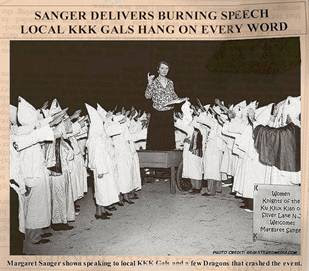 
BLACK AMERICANS, WAKE UP!
It is really sad, and something of a mystery, to see the overwhelming support Barack Hussein Obama is receiving from African-Americans in his bid to become the next president of the United States. It is understandable in terms of their pride in one of their race actually having been nominated by one of the major political parties.

But what is tragic about their support of Barack is that they are seeking to put in the White House a man who has promised that his very first act as President will be to support and then sign into law the FREEDOM OF CHOICE ACT (FOCA) presently before Congress. FOCA would wipe out all existing legislation regulating the abortion
industry in our Nation. If you do not believe that Obama has promised to do that, watch this video of him addressing the national convention of PLANNED PARENTHOOD IN AMERICA last summer:

I say that black Americans’ support of the candidacy of Barack Hussein Obama is a mystery because there is not logical explanation for a people supporting a candiidate who advocates genocide against them. You find that hard to believe?

The hard truth is that Planned Parentoood of America has been supported financially by Obama in the past when he was in charge of two foundations in Chicago and he in turn has had his candidacy supported by Planned Parenthood.

You think I am joking? Look at the photograph above of Margaret Sanger addressing a group of women, wives of KKK members. Read her books.


I first tried to raise the consciousness of black Americans to this tragic situation back in the 1970’s when I first became aware that a black physician, Dr. Mildred Jefferson, had become the President of PLANNED PARENTHOOD OF AMERICA. I wrote several essays on the subject and they were published in the national media. I pointed out the contradiction of Mildred Jefferson heading up an organization dedicated to the extermination of her race.

It is easy to see visible evidence of the planning of Planned Parenthood in placing so many of their abortuaries in ghetto locations.

Wake up, black Americans! Do not help elect Barack Hussein Obama to the presidency of the United States and thereby help him and Planned Parenthood of America achieve the eugenic goals of Margaret Sanger!!