HERE IS A GLIMPSE OF THE FUTURE: IF THIS DOES NOT SCARE YOU, YOU ARE DEAD

If the current polls hold, Barack Obama will win the White House on November 4 and Democrats will consolidate their Congressional majorities, probably with a filibuster-proof Senate or very close to it. Without the ability to filibuster, the Senate would become like the House, able to pass whatever the majority wants. 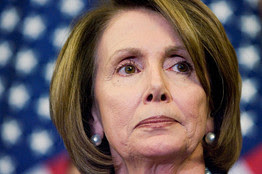 Though we doubt most Americans realize it, this would be one of the most profound political and ideological shifts in U.S. history. Liberals would dominate the entire government in a way they haven't since 1965, or 1933. In other words, the election would mark the restoration of the activist government that fell out of public favor in the 1970s. If the U.S. really is entering a period of unchecked left-wing ascendancy, Americans at least ought to understand what they will be getting, especially with the media cheering it all on.

The nearby table shows the major bills that passed the House this year or last before being stopped by the Senate minority. Keep in mind that the most important power of the filibuster is to shape legislation, not merely to block it. The threat of 41 committed Senators can cause the House to modify its desires even before legislation comes to a vote. Without that restraining power, all of the following have very good chances of becoming law in 2009 or 2010.

- Medicare for all. When HillaryCare cratered in 1994, the Democrats concluded they had overreached, so they carved up the old agenda into smaller incremental steps, such as Schip for children. A strongly Democratic Congress is now likely to lay the final flagstones on the path to government-run health insurance from cradle to grave.

Mr. Obama wants to build a public insurance program, modeled after Medicare and open to everyone of any income. According to the Lewin Group, the gold standard of health policy analysis, the Obama plan would shift between 32 million and 52 million from private coverage to the huge new entitlement. Like Medicare or the Canadian system, this would never be repealed.

The commitments would start slow, so as not to cause immediate alarm. But as U.S. health-care spending flowed into the default government options, taxes would have to rise or services would be rationed, or both. Single payer is the inevitable next step, as Mr. Obama has already said is his ultimate ideal.

- The business climate. "We have some harsh decisions to make," Speaker Nancy Pelosi warned recently, speaking about retribution for the financial panic. Look for a replay of the Pecora hearings of the 1930s, with Henry Waxman, John Conyers and Ed Markey sponsoring ritual hangings to further their agenda to control more of the private economy. The financial industry will get an overhaul in any case, but telecom, biotech and drug makers, among many others, can expect to be investigated and face new, more onerous rules. See the "Issues and Legislation" tab on Mr. Waxman's Web site for a not-so-brief target list.

The danger is that Democrats could cause the economic downturn to last longer than it otherwise will by enacting regulatory overkill like Sarbanes-Oxley. Something more punitive is likely as well, for instance a windfall profits tax on oil, and maybe other industries.

- Union supremacy. One program certain to be given right of way is "card check." Unions have been in decline for decades, now claiming only 7.4% of the private-sector work force, so Big Labor wants to trash the secret-ballot elections that have been in place since the 1930s. The "Employee Free Choice Act" would convert workplaces into union shops merely by gathering signatures from a majority of employees, which means organizers could strongarm those who opposed such a petition.

The bill also imposes a compulsory arbitration regime that results in an automatic two-year union "contract" after 130 days of failed negotiation. The point is to force businesses to recognize a union whether the workers support it or not. This would be the biggest pro-union shift in the balance of labor-management power since the Wagner Act of 1935.

- Taxes. Taxes will rise substantially, the only question being how high. Mr. Obama would raise the top income, dividend and capital-gains rates for "the rich," substantially increasing the cost of new investment in the U.S. More radically, he wants to lift or eliminate the cap on income subject to payroll taxes that fund Medicare and Social Security. This would convert what was meant to be a pension insurance program into an overt income redistribution program. It would also impose a probably unrepealable increase in marginal tax rates, and a permanent shift upward in the federal tax share of GDP.

- The green revolution. A tax-and-regulation scheme in the name of climate change is a top left-wing priority. Cap and trade would hand Congress trillions of dollars in new spending from the auction of carbon credits, which it would use to pick winners and losers in the energy business and across the economy. Huge chunks of GDP and millions of jobs would be at the mercy of Congress and a vast new global-warming bureaucracy. Without the GOP votes to help stage a filibuster, Senators from carbon-intensive states would have less ability to temper coastal liberals who answer to the green elites.

- Free speech and voting rights. A liberal supermajority would move quickly to impose procedural advantages that could cement Democratic rule for years to come. One early effort would be national, election-day voter registration. This is a long-time goal of Acorn and others on the "community organizer" left and would make it far easier to stack the voter rolls. The District of Columbia would also get votes in Congress -- Democratic, naturally.

Felons may also get the right to vote nationwide, while the Fairness Doctrine is likely to be reimposed either by Congress or the Obama FCC. A major goal of the supermajority left would be to shut down talk radio and other voices of political opposition.

- Special-interest potpourri. Look for the watering down of No Child Left Behind testing standards, as a favor to the National Education Association. The tort bar's ship would also come in, including limits on arbitration to settle disputes and watering down the 1995 law limiting strike suits. New causes of legal action would be sprinkled throughout most legislation. The anti-antiterror lobby would be rewarded with the end of Guantanamo and military commissions, which probably means trying terrorists in civilian courts. Google and MoveOn.org would get "net neutrality" rules, subjecting the Internet to intrusive regulation for the first time.

It's always possible that events -- such as a recession -- would temper some of these ambitions. Republicans also feared the worst in 1993 when Democrats ran the entire government, but it didn't turn out that way. On the other hand, Bob Dole then had 43 GOP Senators to support a filibuster, and the entire Democratic Party has since moved sharply to the left. Mr. Obama's agenda is far more liberal than Bill Clinton's was in 1992, and the Southern Democrats who killed Al Gore's BTU tax and modified liberal ambitions are long gone.

In both 1933 and 1965, liberal majorities imposed vast expansions of government that have never been repealed, and the current financial panic may give today's left another pretext to return to those heydays of welfare-state liberalism. Americans voting for "change" should know they may get far more than they ever imagined.