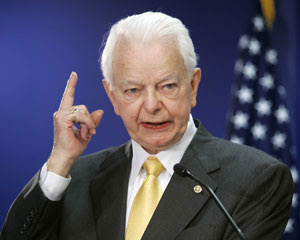 It is difficult to settle consistently on an opionion regarding
Senator Robert Byrd.
He is such a maverick!
He has risen from poverty in the southern West Virginia coal mining region
through a political career which stretches over a seventy year period
including membership in the KuKluxKlan to his present
position as President Pro-Tem of the U.S. Senate, in which
position he is third in line to succeed to the presidency of the
United States
behind Joe Biden and Nancy Pelosi
in the event something should prematurely end the
reign of our Supreme Leader, Barack Hussein Obama.
Byrd's voting record illustrates just how hard it is to
get a handle on him:

On occasion, Byrd disagreed with President Bill Clinton's policies. Byrd initially said that the impeachment proceedings against Clinton should be taken seriously and conducted completely. Although he harshly criticized any attempt to make light of it, he made the motion to dismiss the charges against the president and effectively suspend proceedings. Even though he voted against both articles of impeachment, he was the sole Democrat to vote for the censure of Clinton.[35] He strongly opposed Clinton's 1993 efforts to allow gays to serve in the military and has also supported efforts to limit gay marriage. However, he opposed the Federal Marriage Amendment, arguing that it was unnecessary because the states already had the power to ban gay marriages.[36] However, when the amendment came to the Senate floor he was one of the two Democratic Senators who voted in favor of the cloture motion.[37] He also opposes affirmative action.

He also voiced praise for George W. Bush's nomination of Judge John Roberts to fill the vacancy on the Supreme Court created by the death of Chief Justice William Rehnquist. Likewise, Byrd supported the confirmation of Samuel Alito to replace retiring Associate Justice Sandra Day O'Connor. Like most Democrats, however, Byrd opposed Bush's tax cuts and his proposals to change the Social Security program. He is pro-choice and voted against the first ban on partial birth abortions in 1995, but voted for the bill on subsequent occasions. Byrd voted against Laci and Conner's Law, which strongly divided the supporters and opponents of legal abortion.

Byrd is opposed to the Flag Desecration Amendment, saying that, while he wants to protect the American flag, he believed that amending the constitution "is not the most expeditious way to protect this revered symbol of our Republic." In response to the amendment, Byrd has cosponsored S. 1370, a bill that prohibits destruction or desecration of the flag by anyone trying to incite violence or causing a breach of the peace. It also provides that anyone who steals, damages, or destroys a flag on federal property, whether a flag owned by the federal government or a private group or individual, can be imprisoned for up to two years, or can be fined up to $250,000, or both.[38]

In 2003, Byrd voted for the Partial-Birth Abortion Act, which prohibits a form of late-term abortion known as partial-birth abortion.[39]

In 2004, Byrd offered an amendment that would limit the personnel in Plan Colombia, but was defeated in the Senate.[40]

Byrd received a 65 percent vote rating from the League of Conservation Voters for his support of environmentally friendly legislation.[41] Additionally, he received a "liberal" rating of 65.5% by the National Journal — higher than six other Democratic senators.[42]

In 2009, Byrd was one of three Democrats to oppose the confirmation of Secretary of the Treasury Timothy Geithner. Geithner was confirmed 60-34.[44] After missing nearly two months of votes due to being hospitalized, Byrd returned to the senate floor on July 21 to vote against the elimination of funding for the F-22 fighter plane. [45]

One thing everyone agrees on concerning Senator Robert Byrd
is that he is fiercely dedicated to preserving the
role of the United States Constitution as the
guiding document governing all aspects of our
democratic Republic.

In that regard, his views about the Obama Administration's
practice of appointing 'czars' to control all aspects of America's
economic and social life are important.
He recently wrote:

"The rapid and easy accumulation of power by White House staff can threaten the constitutional system of checks and balances," he wrote. "At the worst, White House staff have taken direction and control of programmatic areas that are the statutory responsibility of Senate confirmed officials."

Others have pointed out that under Obama
cabinet officers (who are subject to scrutiny by Congress,
both before confirmation and afterward) are now
mere flower pots decorating the White House,
and real power is exercised by the czars
free of Congressional supervision.

That is exactly what the Founders warned
against in developing our Constitution.
Our Government is a government of careful
checks and balances.

Under Barack Hussein Obama the
Constitution is being subverted.

The sudden departure of Van Jones
from his post as the White House aide in charge of "green jobs"
helps illustrate one risk of President Obama's tendency to surround him with policy "czars" -- i.e., presidential appointees
who don't require Senate confirmation but nonetheless exercise real influence.

Mr. Jones wasn't vetted nearly as fully as he would have been had his position required Senate confirmation. That allowed his most outrageous and controversial statements -- such as signing a petition endorsing a probe into whether the U.S. government orchestrated the 9/11 attacks -- to escape scrutiny for several months.

Rep. Mike Pence, an Indiana Republican, says it's time to rein in the proliferation of czars. The latest count shows over 30, including a technology czar, climate czar, urban czar, energy czar and health care czar. The bailout czar and the executive-pay czar are often at cross-purposes. There is even a Great Lakes czar to manage environmental cleanup in the region.

Mr. Pence is asking President Obama to suspend the appointment of any new czars until Congress has looked into their background and exact responsibilities. In some cases, he fears that czars are turning Cabinet officials into the equivalent of potted plants as czars exercise the real power because they have the president's ear.

It's not only Republicans who fret about creeping "czarism." Earlier this year, Sen. Robert Byrd, the Senate's Democratic President Pro Tempore, criticized what he called a power grab by the executive branch. "The rapid and easy accumulation of power by White House staff can threaten the constitutional system of checks and balances," he wrote. "At the worst, White House staff have taken direction and control of programmatic areas that are the statutory responsibility of Senate confirmed officials."

Mr. Obama hasn't been too concerned until now about the number of czars -- even cracking a joke last June that he had appointed so many that ABC was soon going to launch a series called "Dancing With the Czars." But perhaps the debacle over Van Jones will convince him it's in his own interest to have a better idea of just who is working for him.