HOORAY! OBAMA HAS SOLVED THE PROBLEM OF ILLEGAL IMMIGRATION - BY PLUNGING AMERICA INTO A DEEP RECESSION 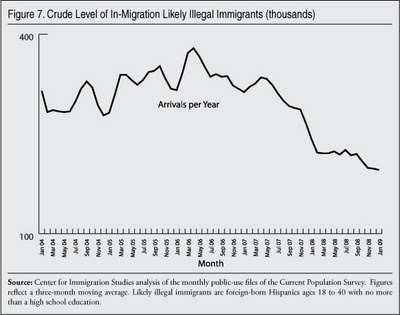 The number of illegal immigrants entering the United States has plummeted since 2007.

WHATEVER HAPPENED
to the furor over illegal immigration?
Two years ago, the denunciation of "crimmigrants"
was approaching fever pitch,
especially in conservative precincts,
and woe betide any candidate who appeared before a Republican audience
and failed to denounce "amnesty"
– i.e., any proposal that would allow illegal aliens to legalize their status --
with every ounce of conviction he could muster.
Now, however, the hysteria seems to have cooled a bit. There was no bellowing when President Obama reiterated during a Mexican summit last month that he intends to press for "a pathway to citizenship" for the millions of illegal immigrants living in the United States. News stories highlighted instead his acknowledgment that overhauling immigration law would have to wait until next year at the earliest – a retreat from his 2008 promise to make "comprehensive immigration reform . . . a top priority in my first year as president."


The number of illegal immigrants entering the United States has plummeted since 2007.
Perhaps the brawl over the issue has simply been upstaged by the current brawl over ObamaCare, in which immigration has been reduced to a supporting role. Or maybe the lowering of the decibel level is a reaction to something else: a significant decline in the number of illegal immigrants living in the United States.
For some time now, news reports have been calling attention to the flow of immigrants back to their homelands. Recent headlines tell the story: "Bad economy forcing immigrants to reconsider US" (CNN); "More Mexican immigrants returning home" (Orange County Register); "Immigrants head home as jobs dry up" (Rocky Mountain News); "Fewer Cubans make crossing to Fla.; economy cited" (Associated Press); "Job losses push immigrants out" (Chattanooga Times Free Press).
According to the Center for Immigration Studies, which favors sharp immigration restrictions, the population of illegal aliens in the United States declined by almost 14 percent, or 1.7 million people, between the summer of 2007 and the spring of 2009. Analyzing Census Bureau data, researchers Steven Camarota and Karen Jensenius calculate that the number of immigrants entering the country illegally has fallen by one-third, while the number returning home has more than doubled. "Both increased immigration enforcement and the recession seem to explain this decline," they write.
Certainly enforcement is up. The Obama administration, like the Bush administration in its second term, has made a point of tightening the border and punishing employers who hire illegal immigrants. "The share of the US border that has a fence has increased significantly in the last three years and the number of Border Patrol agents has more than doubled," the CIS report notes. Removal and deportation of unlawful aliens "has increased dramatically," as federal agents have repeatedly raided workplaces where immigrants are employed. "Worksite enforcement has seen some of the largest increases in recent years, with the number of criminal and administrative arrests increasing more than five-fold since 2005."
But as the slew of the news stories focusing on the economy suggest, what is primarily driving the immigration outflow is the recession. In good economic times, immigrants pour into the United States; at other times the influx slows or reverses. It has ever been thus, and -- barring the implementation of a border and workplace crackdown more ruthless than anything most Americans would tolerate -- ever will be.
During the recent boom, the US economy was creating 400,000 new low-skill jobs per year. Immigrants surged in droves to fill those jobs, most of them illegally since US immigration law provides almost no lawful option for unskilled immigrants with no American relatives. Because immigration is a measure of economic robustness, the news that 1.7 million fewer illegal immigrants live within our borders is a datum to regret, not celebrate.
A study published by the Cato Institute last month debunks the notion that preventing illegal immigrants from entering or working in the United States is good for the economy. "Increased enforcement and reduced low-skill immigration have a significant negative impact on the income of US households," economists Peter Dixon and Maureen Rimmer write. Whatever savings might be achieved in public expenditures "would be more than offset by losses in economic output and job opportunities for more-skilled American workers."
Legalizing low-skilled immigrants, on the other hand, expands the US economy and leads to the creation of new higher-skilled jobs. Result: "significant income gains for American workers and households" -- gains the authors estimate at $180 billion a year.
The benefits of immigration, a potent growth hormone, have always outweighed the costs. Men and women willing to uproot their lives, to brave daunting obstacles in order to come to America and work hard, are men and women we should welcome with open arms. Calling them "crimmigrants" accomplishes nothing. Letting more of them immigrate legally would.
---
Bad news:
Illegal immigration is down
by Jeff Jacoby The Boston Globe September 6, 2009
http://www.jeffjacoby.com/6176/bad-news-illegal-immigration-is-down
(Jeff Jacoby is a columnist for The Boston Globe.)
*************