RECIPE FOR A UNITED NATIONS: TAKE A QUART OF ICE CREAM AND A QUART OF DOG FECES AND MIX 'EM TOGETHER 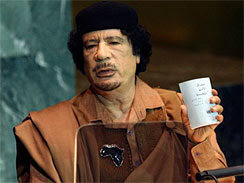 Half a decade or so back, I wrote:

"It's a good basic axiom that if you take a quart of ice cream and a quart of dog feces and mix 'em together the result will taste more like the latter than the former. That's the problem with the U.N."

Absolutely right, if I do say so myself. When you make the free nations and the thug states members of the same club, the danger isn't that they'll meet each other half-way but that the free world winds up going three-quarters, seven-eighths of the way.

That's what happened in New York last week. Barack Obama is not to blame for whichever vagary of United Nations protocol resulted in the president of the United States being the warm-up act for the Lunatic-for-Life in charge of Libya.

But it is a pitiful reflection upon the state of the last superpower that, when it comes to the transnational mush drooled by the leader of the free world or the conspiracist ramblings of a terrorist pseudo-Bedouin running a one-man psycho-cult of a basket-case state, it's more or less a toss-up as to which of them is more unreal.

To be sure, Col. Gadhafi peddled his thoughts on the laboratory origins of swine flu and the Zionist plot behind the Kennedy assassination.

But, on the other hand, President Obama said: "No nation can or should try to dominate another nation."

Pardon me? Did a professional speechwriter write that? Or did you outsource it to a starry-eyed runner-up in the Miss America pageant? Whether any nation "should try" to dominate another, they certainly "can," and do so with effortless ease, all over the planet and throughout human history.

And how about this passage?

"I have been in office for just nine months — though some days it seems a lot longer. I am well aware of the expectations that accompany my presidency around the world. These expectations are not about me. Rather, they are rooted, I believe, in a discontent with a status quo that has allowed us to be increasingly defined by our differences ... ."

Forget the first part: That's just his usual narcissistic "But enough about me, let's talk about what the world thinks of me" shtick. But the second is dangerous in its cowardly evasiveness: For better or worse, we are defined by our differences — and, if Barack Obama doesn't understand this when he's at the podium addressing a room filled with representatives of Iran, Sudan, Saudi Arabia, North Korea, Venezuela and other unlovely polities, the TV audience certainly did when Col. Gadhafi took to the podium immediately afterward.

They're both heads of state of sovereign nations. But if you're on an Indian Ocean island when the next tsunami hits, try calling Libya instead of the U.S. and see where it gets you.

This isn't a quirk of fate. The global reach that enables America and a handful of others to get to a devastated backwater on the other side of the planet and save lives and restore the water supply isn't a happy accident but something that derives explicitly from our political systems, economic liberty, traditions of scientific and cultural innovation, and a general understanding that societies advance when their people are able to fulfill their potential in freedom.

In other words, America and Libya are defined by their differences.

What happens when you pretend those differences don't exist? Well, you end up with the distinctively flavored ice cream I mentioned at the beginning.

The day after the U.S. president addressed the U.N., the prime minister of Israel took to the podium and held up a copy of the minutes of the Wannsee Conference at which German officials planned the "Final Solution" to their Jewish problem.

This is the pathetic state to which the U.N. has been reduced after six decades: The Jew-hatred of Ahmadinejad and others is so routine that a sane man has to stand up and attempt to demonstrate to lunatics that the Holocaust actually happened.

One sympathizes with Benjamin Netanyahu. But he's missing the point.

Ahmadinejad & Co. aren't Holocaust deniers because of the dearth of historical documentation. They do so because they can, and because it suits their own interests to do so, and because in the regimes they represent, the state lies to its people as a matter of course and to such a degree that there is no longer an objective reality, only a self-constructed one.

In Libya and Syria and far too many "nations," truth is simply what the thug in the presidential palace declares it to be.

But don't worry, Obama assures them, we're not "defined by our differences." Hey, that's great, isn't it? Yet if you can no longer distinguish between the truth and a lie, why be surprised that the lie metastasizes and becomes, if not yet quite respectable, at least semi-respectable and acceptable in polite society?

Some Western nations walked out of Ahmadinejad's speech: Canada was first; Austria stuck around; America left somewhere in between. "It is disappointing that Mr. Ahmadinejad has once again chosen to espouse hateful, offensive and anti-Semitic rhetoric," huffed U.S. spokesman Mark Kornblau.

Oh, come off it, you ludicrous poseur. President Obama's position is that he's anxious to hold talks "without preconditions" with his Iranian colleague. How can you do that if you're going to flounce out like a big drama queen at the first itsy-bitsy pro forma Judenhass?

Although he affects a president-of-the-world manner, I don't think Barack Obama cares much about foreign affairs one way or the other. He has a huge transformative domestic agenda designed to leave this country looking much closer to the average Continental social democracy.

His principal interest in the rest of the planet is he doesn't need some nutjob nuking Cleveland before he's finished reducing it to a moribund socialist swamp. And so, like many European nations, when it comes to the global scene, Obama has attitudes rather than policies. If you're on the receiving end — like Israel, Poland, Honduras — it's not pleasant, and it's going to get worse.

It was striking to hear Gadhafi and Chavez profess their admiration for Obama, call him "our son." and declare their fond hope that he remain president for life.

As the contours of the post-American world emerge, they will have plenty of time to reconsider their enthusiasm.