NEITHER JOHN McCAIN NOR BARACK OBAMA WERE BORN U.S. CITIZENS AND HENCE ARE INELIGIBLE TO BE PRESIDENT OF THE UNITED STATES

Posted in Uncategorized on September 16, 2009 by naturalborncitizen 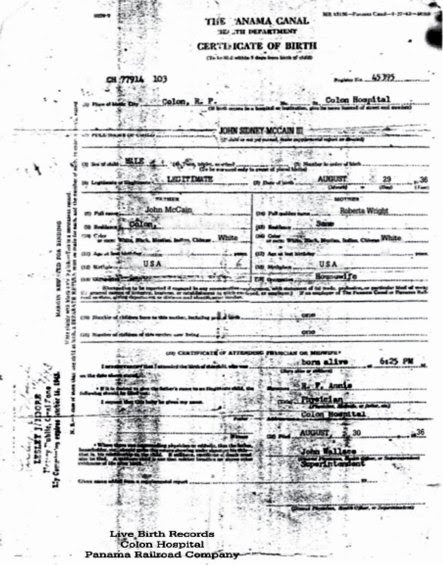 I’m sick of the partisan hijacking of the eligibility issue. I want people to know that my blog is not partisan. From the start, when I brought my law suit against the NJ Secretary of State, I attempted to have her remove the names of both Obama and McCain from the ballots. Neither is a natural born citizen and neither should be President.

Recently, I was on the air with a certain right wing blogger who alleged that persons born abroad could be POTUS. Unfortunately, I wasn’t connected to the program until after this bogus comment was made and it wasn’t brought to my attention until yesterday. It was obviously an attempt to sanitize McCain’s fraudulent eligibility. I will address it now.

Regardless, even if we analyze the issue by assuming McCain was born in the Canal Zone, Panama law states that McCain was a citizen of Panama at birth.

According to Article 13 of the Panama Constitution, a person born in Panama does not lose his citizenship unless he explicitly or tacitly renounces it. McCain has never, as far as I know, acknowledged his Panama citizenship so I doubt that he has ever explicitly renounced the same.

The Panama Constitution unequivocally made John McCain a citizen of Panama at birth. If one is going to argue that Obama is not eligible to be President because he was British at birth – even if born in Hawaii – then we certainly must also argue that McCain, who was Panamanian at birth and who was born in national territory of Panama – is not eligible to be President either.

Anti Obama eligibility bloggers who refuse to accept the true legal analysis of McCain’s failure to qualify as a natural born citizen are setting themselves and the entire eligibility movement up for failure. By not acknowledging McCain’s ineligibility, you provide ammunition for the left to paint all efforts to remove Obama as partisan politics.

But due to McCain having been born abroad, he is certainly not going to come forward and attempt to have Obama removed from office. In fact, McCain has supported Obama’s eligibility. How very convenient.

Beware of bloggers who are not lawyers giving you bogus partisan interpretations of what the law is and analyzing it for you as if they had a law license and had taken a bar exam to prove their skills. They are charlatans trying to spin you. And they are everywhere, on the left and the right.