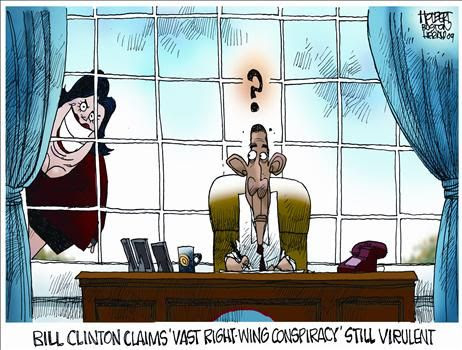 This piece by Lloyd Marcus, a black conservative,

is called "Stop Allowing The Left To Set The Rules",

and deals with the alleged racism of the anti-Obama opposition.

The Left published a cartoon depicting former black Secretary of State Condolezza Rice as an Aunt Jemima; another depicted Rice as a huge-lipped parrot for her Massa Bush. Neither were considered racist by their creators or publishers, or even widely condemned on the Left.

In opposition to black Republican Michael Steele's campaign torun for U.S. Senate, a liberal blogger published a doctored photo of Steele in black face and big red lips made to look like a minstrel. The caption read, "Simple Sambo wants to move to the big house". Not one Democrat denounced these racist portrayals of black conservatives.

True. Nobody minds liberal commentators expressing the hope that Clarence Thomas "will die early from heart disease like many black men", etc. Contemporary identity-group politics are prototype one-party states: If you're a black Republican Secretary of State, you're not really black. If you're a female Republican vice-presidential nominee, you're not really a woman. What's racist and sexist here is the notion that, if you're black or female, your politics is determined by your group membership.

But, if we're talking about letting the left "set the rules", Mr Marcus' column reminded me of a larger point: Don't take your opponents at face value; listen to what they're really saying. What does the frenzy unleashed on Sarah Palin last fall tell us? What does Newsweek's "Mad Man" cover on Glenn Beck mean? Why have "civility" drones like Joe Klein so eagerly adopted Anderson Cooper's scrotal "teabagging" slur and characterized as "racists" and "terrorists" what are (certainly by comparison with the anti-G20 crowd) the best behaved and tidiest street agitators in modern history?

They're telling you who they really fear. Whom the media gods would destroy they first make into "mad men". Liz Cheney should be due for the treatment any day now.

Sad to say, many who should know better go along with it. Our old comrade David Frum wrote a piece called "Whose Side Is Glenn Beck On?" Well, in the space of a week Beck claimed the scalps of Van Jones, Acorn and that Yosi Sergant guy at the NEA, none of whom should ever have been anywhere near the corridors of power but who'd still be there if it weren't for Beck. So whoever's side he is on, it seems pretty clear he's not on the Obama Administration's. Hence, Media Matters' sudden obsession with such pressing concerns as Glenn's mom's three decade-old suicide.

The media would like the American right to be represented by the likes of Bob Dole and John McCain, decent old sticks who know how to give dignified concession speeches. Last time round, we went along with their recommendation. If you want to get rave reviews for losing gracefully, that's the way to go. If you want to win, look at whom the Democrats and their media chums are so frantic to destroy: That's the better guide to what they're really worried about.

WHAT THEY ARE TELLING US