AMERICA WILL BE ON TRIAL IN NEW YORK CITY 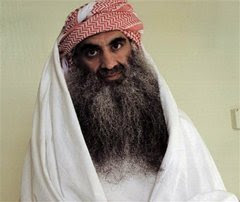 the accused mastermind of the Sept. 11 atrocities,

AS A CANDIDATE for president in 2004, Senator John Kerry described international terrorism as "primarily an intelligence and law enforcement operation," and urged voters to think of deadly jihadist violence as merely "a nuisance" that we need "to reduce," but that "we're never going to end" -- akin, he said, to gambling or prostitution.

Kerry lost that election, and the Bush administration's very different approach -- treating terrorist attacks as acts of war, not criminal violations -- continued for four more years. Pre-empting terror in advance, not prosecuting it after the fact, remained the overriding priority. Counterterrorism efforts under George W. Bush were aggressive and they drew much criticism. But whatever else might be said about them, there was no repeat of the 9/11 catastrophe on American soil during Bush's presidency.

It was always clear that the Obama administration tends to see global terrorism the way Kerry did, as a criminal issue to be handled through the criminal-justice system. In a speech last May, President Obama announced that "wherever feasible," Guantanamo Bay detainees would be tried in regular federal courts. "Some have derided our federal courts as incapable of handling the trials of terrorists," he said. "They are wrong. Our courts and our juries, our citizens, are tough enough to convict terrorists."

But Obama also said that "detainees who violate the laws of war" would be "tried through military commissions," the time-honored venue for prosecuting wartime enemies. And come what may, the president vowed, he would not release the most dangerous detainees of all -- those who "expressed their allegiance to Osama bin Laden or otherwise made it clear that they want to kill Americans . . . people who, in effect, remain at war with the United States."

If that description fits anyone, it is surely Khalid Sheikh Mohammed, the unrepentant mastermind of the 9/11 slaughter and an avowed enemy of the United States.

Mohammed and his al-Qaeda co-conspirators, led by Bin Laden, made war against America while committing horrendous war crimes -- above all, the deliberate, unprovoked murder of thousands of innocent civilians. The place to try such war criminals is before the military commissions Congress created for that purpose, commissions that even Obama acknowledged "have a long tradition in the United States" and "are appropriate for trying enemies who violate the laws of war." The administration's decision to transfer Mohammed and the other 9/11 plotters from Guantanamo to New York City, and to put them on trial in a civilian court as if they were ordinary criminals, seems completely inconsistent with the president's earlier assurances. It is also inconsistent with the announcement that Abd al-Rahim al-Nashiri, who is accused of planning the deadly attack in 2000 on the USS Cole, will be tried by a military commission.

But worse than inconsistent, the administration's action is reckless.

As defendants in federal court, the al-Qaeda prisoners will be entitled to the full panoply of due-process rights, including the right to discovery of all of the government's information about them, where that information came from, and the methods by which it was obtained.

"Nothing results in more disclosures of government intelligence than civilian trials," writes former federal prosecutor Andrew C. McCarthy. "They are a banquet of information, not just at the discovery stage but in the trial process itself, where witnesses -- intelligence sources -- must expose themselves and their secrets."

McCarthy should know. He was the prosecutor of Omar Abdel Rahman, the "blind sheikh" put on trial after the 1993 World Trade Center bombing. Though Rahman was eventually convicted and is serving a life sentence, the government was required to supply defense lawyers with intelligence details, including a sensitive list of 200 potential co-conspirators -- people the government knew about, but didn't have enough evidence to charge. Within days, those names had found their way to Sudan and were in the possession of bin Laden, an intelligence windfall that strengthened his ability to wage jihad against the United States.

No good can come from blurring the distinction between conventional crimes and acts of war. Khalid Sheikh Mohammed and his confederates are enemies of the United States seized in wartime, not members of our society who have run afoul of our laws. It is easy to see what al-Qaeda gains from a New York trial: a powerful propaganda platform and the forced disclosure of American secrets. Will it take another 9/11 to remind Americans how much they stand to lose?

LIVE FROM NEW YORK, A TERROR TRIAL WE WILL REGRET