The will to power, which is the driving force behind the Obamacrats,
provides the energy for them to advance the agenda of the Obamanation. Republican democracy (that is republican with a small "r") depends for its success, its survival, on an educated electorate. Sad to say, all the empirical evidence about the education system of the United States points to massive failure of that system to educate the vast majority of our citizens. The ignorance which the average person in the street (as testified to by the comedy routine of Jay Leno asking passersby on the street to state simple facts like the name of the first president of the U.S., or the location of any major city of the United States) manifests in the political arena points inevitably to rule by oligarchies.

The few are able to manipulate the 30-40% of the electorate who are so ignorant they will believe anything that a charismatic leader, a Jim Jones, a Barack Obama, would tell them. Adolph Hitler and his Minister of Propaganda showed the world how easy it is to manipulate public opinion by the BIG LIE. Tell an untruth over and over again and pretty soon the ignorant 30-40% of the electorate will vote the way you want them to. For Hitler the big lie was the guilt of the Jews for the near destruction of the Germany during the Weimar Republic. His success with that big lie enabled him to do the Holocaust with the silent assent of the majority of the German People.

We are witnessing another example of the effectiveness of the BIG LIE as it is being used in the current healthcare legislation debate. Jeff Jacoby tells us about it:

One is that private health insurers are raking in obscenely high profits.

The other is that only a government rival can force them to compete on price.

In a clever new commercial featuring Heather Graham as an agile sprinter named "Public Option," the left-wing pressure group MoveOn combines both themes, describing insurance companies as "lazy" and "bloated from the profits of raising our health care costs sky-high." Why, it asks, should anyone resist the competition a public option would generate? After all, "competition is as American as apple pie." In a less amusing print ad a few weeks ago, MoveOn charged that "insurance companies are willing to let the bodies pile up, as long as their profits are safe."

"The insurance industry is making this last-ditch effort to stop reform," he declared on Oct. 16, "even as costs continue to rise and our health-care dollars continue to be poured into their profits (and) bonuses." When he addressed Congress in September, Obama insisted that only a public option will "keep insurance companies honest." On the White House Blog, ObamaCare opponents are accused of "fighting to protect insurance industry profits."

Indeed, there is no shortage of voices characterizing health insurers as greedy villains. Earlier this year, House Speaker Nancy Pelosi praised her party for highlighting "the immoral profits being made by the insurance industry." On CNN last week, Ohio Senator Sherrod Brown demanded a public option "so the insurance industry can't continue to game the system and discriminate" against women and the disabled -- tactics insurers have used to "quadruple their profits in the last five years." If quadrupled profits don't seem rapacious enough, the union-backed Health Care for American Now! ups the ante, claiming, according to the AFL-CIO's news blog, that "during the past five years, health insurance company profits have soared by 1,000 percent."

Outbidding them all is Senate Majority Leader Harry Reid. Health insurance companies "are so anti-competitive," he said last month, "because they make more money than any other business in America today."

To such overheated agitprop, the only useful response is a cold shower of facts, and the Associated Press supplied a timely one last week. For all the impassioned talk about obscene profits and bodies piling up, AP's Calvin Woodward reported, "health insurance profit margins typically run about 6 percent" of revenues, a return "that's anemic compared with other forms of insurance and a broad array of industries." 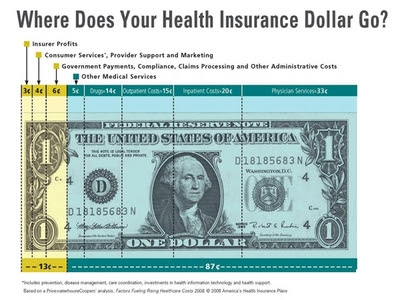 On the Fortune 500 list of top industries, health insurance companies ranked 35th in profitability in 2008; their overall profit margin was a mere 2.2 percent. They lagged far behind such industries as pharmaceuticals (which showed a profit margin of 19.3 percent), railroads (12.6 percent), and mining (11.5 percent). Among health insurers, the best performer last year was HealthSpring, which had a profit of 5.4 percent. "That's a less profitable margin," AP noted, "that was achieved by the makers of Tupperware, Clorox bleach, and Molson and Coors beers."

For the most recent quarter of 2009, health-insurance plans earned profits of only 3.3 percent, ranking them 86th on the expanded Yahoo! Finance list of US industries. The application-software industry, by contrast, is pulling in profits of nearly 22 percent. Why aren't MoveOn and the Democrats demanding a "public option" to compete with Microsoft and Adobe and drive down their "immoral" profits?

There are certainly industries doing worse than health insurance -- airlines and newspapers, for example -- but the notion that health insurers "make more money than any other business in America today" is preposterous. Advocates of a public option may find it tactically expedient to paint insurers as insatiable predators, swollen with ill-gotten profits. The reality is otherwise.

Still, the critics do have one thing right: More competition would bring down health-care premiums. But the way to increase competition is not by adding a government-run health plan to the 1,300 private firms already providing Americans with health insurance. After all, there's no public option for auto insurance and life insurance, yet they're sold in a highly competitive national market. There is no reason health insurance can't be sold the same way.

Hyperbole and the health-care debate