I SPEAK THEREFORE I AM 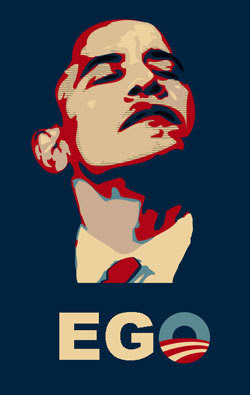 PRESIDENT OBAMA was too busy to attend the celebrations
in Germany this week marking the fall of the Berlin Wall 20 years ago.
But he did appear by video, delivering a few brief and bloodless remarks
about how the wall was "a painful barrier between family and friends"
that symbolized "a system that denied people
the freedoms that should be the right of every human being."
He referred to "tyranny," but never identified the tyrants --
he never uttered the words "Soviet Union" or "communism,"
or example. He said nothing about the men and women
who died trying to cross the wall.
Nor did he mention Harry Truman or Ronald Reagan
-- or even Mikhail Gorbachev.

He did, however, talk about Barack Obama.

"Few would have foreseen," declared the president, "that a united Germany would be led by a woman from [the former East German state of] Brandenburg or that their American ally would be led by a man of African descent. But human destiny is what human beings make of it."

As presidential rhetoric goes, this was hardly a match for "Ich bin ein Berliner," still less another "Mr. Gorbachev, tear down this wall." But as a specimen of presidential narcissism, it is hard to beat. Obama couldn't be troubled to visit Berlin to commemorate a momentous milestone in the history of human liberty. But he was glad to explain to those who were there why reflections on that milestone should inspire appreciation for the self-made "destiny" of his own rise to power.

Was there ever a president as deeply enamored of himself as Barack Obama?

The first President Bush, taught from childhood to shun what his mother called "The Great I Am," regularly instructed his speechwriters not to include too many "I's" in his prepared remarks. Ronald Reagan maintained that there was no limit to what someone could achieve if he didn't mind who got the credit. George Washington, one of the most accomplished men of his day, said with characteristic modesty on becoming president that he was "peculiarly conscious of his own deficiencies."

Obama, on the other hand, positively revels in The Great I Am.

At the start of his presidency, Obama seemed to content himself with the royal "we" -- "We will build the roads and bridges . . . We will restore science to its rightful place . . . We will harness the sun and winds," he declaimed at his inauguration.

But as the literary theorist Stanley Fish points out, "By the time of the address to the Congress on Feb. 24, the royal we [had] flowered into the naked 'I': 'As soon as I took office, I asked this Congress.' 'I called for action.' 'I pushed for quick action.' 'I have told each of my cabinet.' 'I've appointed a proven and aggressive inspector general.' 'I refuse to let that happen.' 'I will not spend a single penny.' 'I reject the view that says our problems will simply take care of themselves.' 'I held a fiscal summit where I pledged to cut the deficit in half.'" In his speech on the federal takeover of GM, Obama likewise found it necessary to use the first-person singular pronoun 34 times. ("Congress" he mentioned just once.)

At this rate, it won't be long before the president's ego is so inflated that it will require a ZIP code of its own.

Then again, how modest would any of us be if we were as magnificent as Obama knows himself to be? "I am well aware," he told the UN General Assemblyof the expectations that accompany my presidency around the world." in September, "

In 1860, writes Doris Kearns Goodwin in her celebrated biography Team of Rivals, an author wishing to dedicate his forthcoming work to Abraham Lincoln received this answer: "I give the leave, begging only that the inscription may be in modest terms, not representing me as a man of great learning, or a very extraordinary one in any respect."

Obama has often claimed Lincoln as a role model. Apparently it only goes so far.