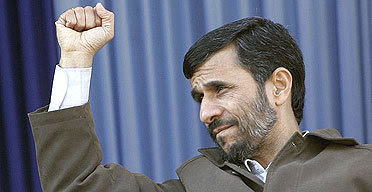 to a purity of 20 percent, well beyond the level needed to fuel a nuclear power plant.

The following day, Iran's supreme leader, Ayatollah Ali Khamenei, declared that Tehran was going to "punch" Western nations during this week's anniversary of the Islamic revolution "in a way that will leave them stunned."

Welcome to a second year of Barack Obama's "engagement" with Iran.

The president's outreach to the brutal theocracy in Tehran began in the very first moments of his presidency.

"To those who cling to power through corruption and deceit and the silencing of dissent," he said in his inaugural address, "we will extend a hand if you are willing to unclench your fist." Tehran promptly responded by calling Obama "the hand of Satan in a new sleeve." A spokesman for Khamenei sneered: "The Great Satan now has a black face."

That initial exchange set the pattern for the year that followed.

Over and over, Obama has sought to "extend a hand" to the Iran's rulers -- taping a message of goodwill for Nowruz, the Iranian New Year; remaining silent after the rigged Iranian election in June; insisting that "dialogue between our two countries" would go on despite the government's bloody crackdown on peaceful protesters -- and each time the regime has pointedly declined to unclench its fist. Khamenei's reply to Obama's New Year greeting was to accuse the president of having "insulted the Islamic Republic of Iran from the first day." He spurned Obama's private overtures with public contempt; to negotiate with the United States, he said in November, would be "naïve and perverted."

Tehran has been equally contemptuous of the deadlines set by the administration for Iran to respond to international concerns about its nuclear program. Washington can announce "as many deadlines as they want, we don't care," Iran's president Mahmoud Ahmadinejad told a crowd of supporters in December. And why would they care, when each deadline has come and gone with Iran's refusal to cooperate triggering no credible response from the White House?

For a year, the Obama administration bent over backward to show that the looming threat of a nuclear-armed Iran could best be defused through patient engagement. Iran's despots spent that year enlarging their uranium-enrichment capabilities, flouting international law, perfecting a ballistic missile with a 1,200-mile range, pouring weapons and money into terrorist groups abroad, and arresting, torturing, and even hanging dissidents at home.

Tehran's apocalyptic Khomeinists have not unclenched their fists, and no amount of gentle diplomacy or goodwill is going to persuade them to do so. Perhaps that wasn't clear to Obama a year ago. Now it is clear to almost everyone.

The closer Iran's regime gets to acquiring nuclear weapons, the more critical it becomes to ostracize and change that regime. It isn't only hawkish right-wingers who think so. In a recent New York Times essay headlined "There's Only One Way to Stop Iran," Alan J. Kuperman, a scholar at the University of Texas and director of its Nuclear Proliferation Prevention Program -- as well as a former aide to such congressional liberals as Charles Schumer and Thomas Foley -- called unambiguously for American air strikes on Iran's nuclear facilities. The Middle East Forum's Daniel Pipes, urging Obama to order such strikes before it is too late, notes that a majority of Americans, as measured in recent polls, favors using force to keep Iran from going nuclear.

In recent weeks, both houses of Congress passed bills imposing stiff sanctions on Iran, particularly by cutting off its access to the gasoline imports on which it heavily depends. The legislation passed unanimously in the Senate, and by a 412-to-12 vote in the House. Not much in Washington these days commands such overwhelming and bipartisan support.

"In my view, there is no greater threat to the world than the prospect of a nuclear Iran," says Representative Howard Berman, the Democratic chairman of the House Foreign Affairs Committee. It may still be possible to neutralize that threat without military force, but we will never find out unless the president jettisons his fantasy of engagement. Millions of Iranian dissidents yearn for a decent government. The unabashed support of the Obama administration, backed up by very tough sanctions, would powerfully aid their cause.

The mullahs will never willingly unclench their fists. By now, most Americans acknowledge that reality. It's time the president did too.