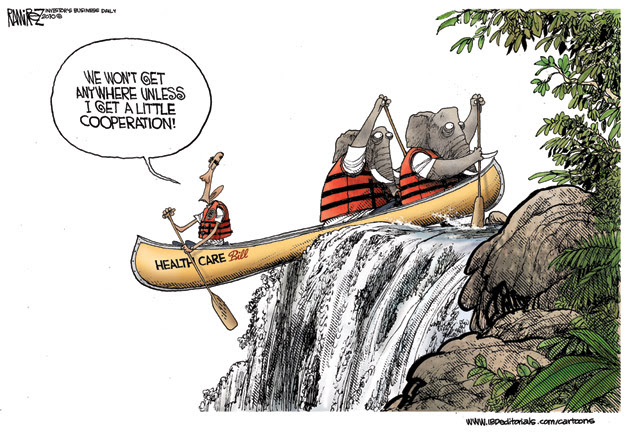 After 34 speeches, three sharp electoral rebukes (Virginia, New Jersey and Massachusetts) and a seven-hour seminar, the president announced Wednesday his determination to make one last push to pass his health care reform.

The final act was carefully choreographed. The rollout began a week earlier with a couple of shows of bipartisanship: a Feb. 25 Blair House "summit" with Republicans, followed five days later with a few concessions tossed the Republicans' way.

Show is the operative noun. Among the few Republican suggestions President Obama pretended to incorporate was tort reform. What did he suggest to address the plague of defensive medicine that a Massachusetts Medical Society study showed leads to about 25% of doctor referrals, tests and procedures being done for no medical reason?

A few ridiculously insignificant demonstration projects amounting to one-half of one-hundredth of 1% of the cost of Obama's health care bill.

As for the Blair House seminar, its theatrical quality was obvious even before it began. The Democrats had already decided to go for a purely partisan bill. Obama signaled precisely that intent at the end of the summit show — then dramatically spelled it out just six days later in his 35th health care speech:

He is going for the party-line vote.

Unfortunately for Democrats, that seven-hour televised exercise had the unintended consequence of showing the Republicans to be not only highly informed on the subject, but also, as even Obama was forced to admit, possessed of principled objections — contradicting the ubiquitous Democratic/media meme that Republican opposition was nothing but nihilistic partisanship.

Republicans did so well, in fact, that in his summation, Obama was reduced to suggesting that his health care reform was indeed popular because when you ask people about individual items (for example, eliminating exclusions for pre-existing conditions or capping individual out-of-pocket payments) they are in favor.

Yet mystifyingly they oppose the whole package. How can that be?

You get the idea. Would each individual provision be popular in the polls? Of course.

However (life is a vale of howevers) suppose these provisions were bundled into a bill that also spelled out how the goodies are to be paid for and managed — say, half a trillion dollars in new taxes, half a trillion in Medicare cuts (cuts not to keep Medicare solvent but to pay for the ice cream, steak and flowers), 118 new boards and commissions to administer the bounty-giving, and government regulation dictating, for example, how your steak was to be cooked. How do you think this would poll?

Perhaps something like 3-1 against, which is what the latest CNN poll shows is the citizenry's feeling about the current Democratic health care bills.

Late last year, Democrats were marveling at how close they were to historic health care reform, noting how much agreement had been achieved among so many factions. The only remaining detail was how to pay for it.

Well, yes. That has generally been the problem with democratic governance: cost. The disagreeable absence of a free lunch.

Which is what drove even strong Obama supporter Warren Buffett to go public with his judgment that the current Senate bill, while better than nothing, is a failure because the country desperately needs to bend the cost curve down and the bill doesn't do it. Buffett's advice would be to start over and get it right.

Obama has chosen differently, however. The time for debate is over, declared the nation's seminar leader in chief. The man who vowed to undo Washington's wicked ways has directed the Congress to ram Obama-Care through, by one vote if necessary, under the parliamentary device of "budget reconciliation."

The man who ran as a post-partisan is determined to remake a sixth of the U.S. economy despite the absence of support from a single Republican in either house, the first time anything of this size and scope has been enacted by pure party-line vote.

You can only be disillusioned if you were once illusioned.

The President Says Onward — Regardless