The selective modesty of Barack Obama 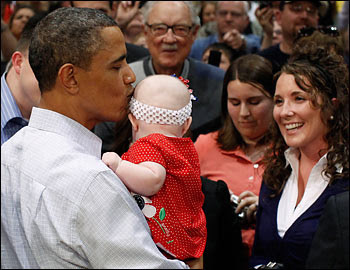 President Obama's swing through the Midwest
The commander in chief this spring went on a campaign-style visit to promote his economic agenda, his plans for clean energy and the need for increased regulation of the financial system.

Remember NASA? It once represented to the world the apogee of American scientific and technological achievement. Here is President Obama's vision of NASA's mission, as explained by administrator Charles Bolden:

Apart from the psychobabble -- farcically turning a space-faring enterprise into a self-esteem enhancer -- what's the sentiment behind this charge? Sure America has put a man on the moon, led the information revolution, won more Nobel Prizes than any other nation by far -- but, on the other hand, a thousand years ago al-Khwarizmi gave us algebra.

Bolden seems quite intent on driving home this message of achievement equivalence -- lauding, for example, Russia's contribution to the space station. Russia? In the 1990s, the Russian space program fell apart, leaving the United States to pick up the slack and the tab for the missing Russian contributions to get the space station built.

For good measure, Bolden added that the United States cannot get to Mars without international assistance. Beside the fact that this is not true, contrast this with the elan and self-confidence of President John Kennedy's 1961 pledge that America would land on the moon within the decade.

There was no finer expression of belief in American exceptionalism than Kennedy's. Obama has a different take. As he said last year in France,

Which of course means: If we're all exceptional, no one is.

Take human rights. After Obama's April meeting with the president of Kazakhstan, Mike McFaul of the National Security Council reported that Obama actually explained to the leader of that thuggish kleptocracy that we, too, are working on perfecting our own democracy.

Nor is this the only example of an implied moral equivalence that diminishes and devalues America. Assistant Secretary of State Michael Posner reported that in discussions with China about human rights, the U.S. side brought up Arizona's immigration law -- "early and often." As if there is the remotest connection between that and the persecution of dissidents, jailing of opponents and suppression of religion routinely practiced by the Chinese dictatorship.

Nothing new here. In his major addresses, Obama's modesty about his own country has been repeatedly on display as, in one venue after another, he has gratuitously confessed America's alleged failing -- from disrespecting foreigners to having lost its way morally after 9/11.

It's fine to recognize the achievements of others and be non-chauvinistic about one's country. But Obama's modesty is curiously selective. When it comes to himself, modesty is in short supply.

It began with the almost comical self-inflation of his presidential campaign, from the still inexplicable mass rally in Berlin in front of a Prussian victory column to the Greek columns framing him at the Democratic convention. And it carried into his presidency, from his posture of philosopher-king adjudicating between America's sins and the world's to his speeches marked by a spectacularly promiscuous use of the word "I."

Notice, too, how Obama habitually refers to Cabinet members and other high government officials as "my" -- "my secretary of homeland security," "my national security team," "my ambassador." The more normal -- and respectful -- usage is to say "the," as in "the secretary of state." These are, after all, public officials sworn to serve the nation and the Constitution -- not just the man who appointed them.

It's a stylistic detail, but quite revealing of Obama's exalted view of himself. Not surprising, perhaps, in a man whose major achievement before acceding to the presidency was writing two biographies -- both about himself.

Obama is not the first president with a large streak of narcissism. But the others had equally expansive feelings about their country. Obama's modesty about America would be more understandable if he treated himself with the same reserve. What is odd is to have a president so convinced of his own magnificence -- yet not of his own country's.