IS IT POSSIBLE THAT EXECUTION BY STONING ACTUALLY STILL TAKES PLACE IN THE WORLD? 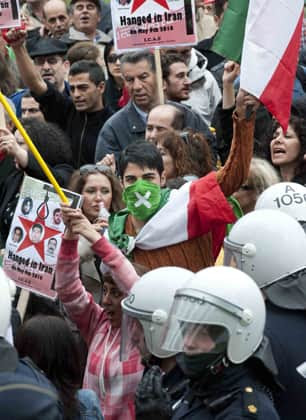 Justice in the Islamic Republic.

If an Iranian prosecutor has his way, a 43-year-old mother of two will soon be taken from her cell in Tabriz prison, wrapped in a white shroud, buried up to her chest in a dirt pit, and stoned to death. In accordance with Iran's penal code, the rocks pelted at her head will be big enough to inflict pain, but not large enough to kill her immediately. It will take time—maybe half an hour—for her to die.

Welcome to Iranian justice, where the testimony of a woman is worth half that of a man, and gays are hanged in the public square.

The Islamic Republic insists that the crimes of Sakineh Mohammadi Ashtiani are manifold. A poor Azeri who speaks little Persian, Ms. Ashtiani was first found guilty by an East Azerbaijan court in May 2006 of having "illicit relationships" with two men. For this, she was lashed 99 times.

In another trial several months later, she was sentenced to stoning for alleged adultery with the man accused of murdering her husband. Last Sunday the head of the East Azerbaijan Judiciary told the Islamic Republic News Agency that, in addition to these sexual crimes, Ms. Ashtiani was also convicted of the murder itself.

Following a campaign by her two children, the Western press and various politicians and celebrities, the Iranian embassy in London issued a statement last week saying the stoning was suspended. Yet Ms. Ashtiani's fate remains unclear. Her lawyer, Mohammad Mostafai, says that the stay is ambiguous and that there's a "very serious chance" of execution by other means, like hanging.

The chief of the judiciary in her province confirmed that "whenever the respectable head of the judiciary [Sadeq Larijani] finds it expedient, the execution of Sakineh Mohammadi Ashtiani will be carried out." Tehran has banned newspapers and TV stations from reporting accurately on Ms. Ashtiani's case. Most Iranians don't even know her name. Meanwhile, we hear that her 22-year-old son Sajad has been summoned by the Tabriz intelligence ministry. Our calls to him went unanswered.

Ten other Iranians accused of adultery (seven women and three men) currently await the same medieval punishment for their "crime against God," according to Amnesty International. The silver lining in all of this is that the public outcry is making a difference. If only the Obama Administration understood this lesson.

How can you possibly talk to a country like Iran?

Every time one feels the UN has pushed the bounds of self-parody to the outermost limits, it seems to find new ways to surprise us.

A few months back, for example, the UN celebrated 30 years of concern over the rights of women with much backslapping. Soon after, it elected Iran — by acclamation no less — to the UN commission on the status of women.

Iran! A country that still sentences women to be half-buried in the ground and stoned to death, in medieval fashion, for adultery. A nation that has regularly tortured and imprisoned women for even a hint of political independence.

What, you would be entitled to ask, was the UN membership thinking?

Iran, of course, is again raising new waves of international outrage with its latest sentence (suddenly withdrawn) of death by stoning for a 43-year-old mother of two, Sakineh Mohammadi Ashtiani.

The convicted "adulteress" had previously been flogged with 99 lashes, apparently in front of her teenage son, for having had an "illicit relationship."

According to reports from Teheran, she may still be executed by other means.

The courts have suddenly introduced a new element — a suspected murder charge — which is an accusation neither her lawyer nor family have even heard mentioned before.

Angered by this sudden upsurge in international pressure, Iran may yet demand this woman's death if only to prove it won't bow to pressure.

In this globalizing 21st century, it is almost impossible to grasp the thinking of a regime that could even contemplate death by stoning.

It would be monstrous for any crime, let alone for a private marital infidelity.

Iranians are not stoned to death for murder or rape, for which hanging is legislated. Only for adultery.

As an abuse of basic human rights, both the so-called crime and the sentence are off the charts.

Stoning belongs to that barbaric period when authorities would allow those condemned to die to be burned at the stake, impaled, drowned, or slowly drawn-and-quartered.

This is the stuff of horror films now brought to life in Iran. The regulations apparently even specify that stones should not be so large as to cause a quick death. Instead, they should be chosen for size in order to prolong the suffering.

Some Iranian officials now insist this ultimate punishment is actually rarely carried out and, in fact, has been under a moratorium since 2002. 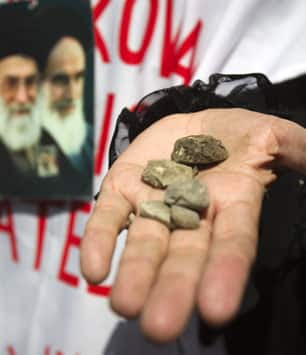 Tit for tat. An Iranian woman shows stones before throwing them toward the French Embassy in Teheran during a rally in June 2010, in a protest against French policies in the region. (Morteza Nikoubazl/Reuters)

Few believe it. Certainly not the world's leading human rights groups such as Amnesty International and Human Rights Watch.

Amnesty says 11 individuals in Iran are currently awaiting the carrying out of this sentence, and six have been stoned to death in just these past four years.

Stoning is not mentioned in the Qur'an. But it has been introduced by a handful of Islamic movements, including Iran following the 1979 revolution, to breath life into ancient customs.

There have been occasional reports, meanwhile, of stoning deaths in Afghanistan and, most infamously, in Somalia, where in October 2008 a large crowd at a soccer stadium was on hand to see a girl stoned to death.

As in all matters pertaining to human rights, the Iranian regime boasts of its adherence to the highest standards but, in reality, pays them no heed.

It is a party to the International Covenant on Civil and Political Rights, which requires that states restrict the death penalty to "the most serious crimes."

But it clearly ignores that obligation. Indeed, Iranian youths have even been sentenced to death for taking part in demonstrations.

Fortunately, the Iranian leadership does seem to pay attention sometimes to well-organized mass protests around the world, such as, perhaps, the computer petition to "Free Sakineh," launched by Canadian businesswoman Heather Reisman and friends. Within days it had close to 90,000 signatures.

Saving Ashtiani from execution is the most urgent aim of this and similar protests. But there is a still larger goal of holding out hope to the women of Iran, who will likely continue to suffer faith-imposed abuse unless the pressure for reform is sustained. 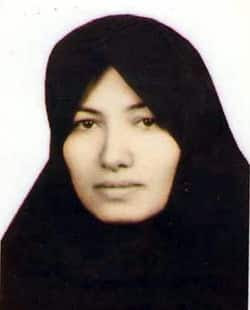 This undated image from Amnesty International in London, is said to be a photo of Sakineh Mohammadi Ashtiani, the mother of two who was facing the punishment of stoning to death in Iran, on charges of adultery. (Amnesty International/Associated Press)

"The time has come for those of us who can speak without fear of reprisal to use our individual and collective voices to support the women of Iran who are truly under siege," Reisman wrote in the Globe and Mail this week.

The Iranian regime needs to hear such noise because it refuses to be discomfited by the criticism of international bodies, even in those rare instances when it is faced with any.

Take the UN for example. When Iran wanted that seat on the UN commission on the status of women, to burnish its image, it simply negotiated its way onto an uncontested slate endorsed by the "Asian regional group."

Since then, this group, which includes Pakistan and several Muslim nations, has intervened to block criticism of Iran's human rights' record as unfair or inappropriately timed.

There was a particularly shameful incident on June 15 when Norwegian ambassador Bente Angell-Hansen tried to criticize Iran's human rights violations on behalf of over 50 concerned states.

She tried to speak of many kinds of violations, including the supression of the minority Baha'i religious faith (which I wrote about last January).

The session was thrown into chaos, however, following 14 interruptions on points of order. That led to a two-hour enforced break while nations debated whether one country, Iran, could be criticized at all.

Pakistan and the Asian group were so insistent against criticizing Iran that the Norwegian ambassador was only allowed to proceed by omitting the very word "Iran" and substituting "in this country" as she tried to make her points.

We should probably also note here that fewer than a third of all UN nations saw fit to support criticism of Iran's rights record.

I don't know what the solution is to the standoff over Iran's nuclear ambitions, and the sanctions that are being contemplated to thwart them.

But in in the area of human rights I do know that silence and apathy in the leadened stillness of diplomatic corridors never protects anyone from tyranny.

The UN's paralysis over Iran suggests there's a strong case for those who are outraged by these abuses to make themselves heard even more forcefully before human rights there crumble entirely into rubble.