THE LAST THING AMERICAN NEEDS IS A SUBSIDIZED PRINT MEDIA

A free press takes no subsidies 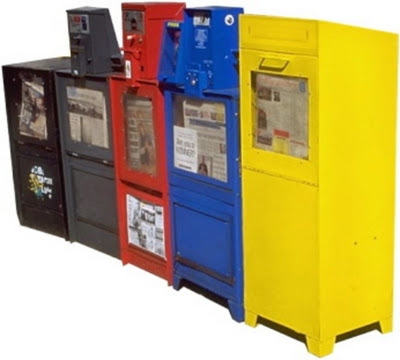 "THE 10 most dangerous words in the English language," said Ronald Reagan in 1988, are 'Hi, I'm from the government, and I'm here to help.'" But how dangerous could it be for the news industry to accept government help in the form of subsidies, tax credits, or other financial support?

The rise of the Internet, as everyone knows, has been hell on traditional media outlets -- especially newspapers and magazines, which have seen their circulation, advertising, and profits plummet as millions of readers have gone digital. Thousands of journalists have lost their jobs, national and foreign bureaus have been shut, news coverage has dwindled, and the long-range forecast is for more of the same. To stop the bleeding and keep American journalism viable, some are suggesting a government lifeline in the form of enhanced public funding.

It's not a popular idea. In a recent Rasmussen poll, large majorities rejected the idea of taxing cell phone service, consumer electronics, or Internet news sites in order to rescue the press. Moreover, "58 percent of Americans are confident that online and other news sources will make up the difference if many newspapers go out of business."

There is more to public opposition to subsidizing the press than resistance to a new tax. Lee Bollinger, a noted scholar of the First Amendment and the president of Columbia University, strongly favors media subsidies, but in a recent essay titled "Journalism Needs Government Help," he acknowledges fairly the case against it:

"The idea of public funding for the press stirs deep unease in American culture. To many it seems inconsistent with our strong commitment, embodied in the First Amendment, to having a free press capable of speaking truth to power and to all of us. This press is a kind of public trust, a fourth branch of government. Can it be trusted when the state helps pay for it?" In a new book on press freedom in the 21st century, Uninhibited, Robust, and Wide-Open, Bollinger concedes the widespread belief "that government funding is antithetical to the spirit of an independent press." But, he says, "this view needs to change."

Does it, though? Can it honestly be argued that a news organization that takes money from the government it purports to cover without fear or favor doesn't compromise its independence or set up at least the perception of a conflict of interest?

I don't suggest that fine journalism can never be produced by government-subsidized news outlets, only that there is a price to be paid. NPR receives taxpayer dollars, and much of its news programming is first-rate. But when was the last time NPR aggressively reported on its benefactors at the Corporation for Public Broadcasting? How vigilant and skeptical is the NPR newsroom when it comes to members of the House and Senate Appropriations subcommittees that control its generous tax-funded allowance? More broadly, how often does NPR's coverage challenge the presumption that society's problems call for government solutions?

"A government that props up the media," Reason magazine editor Peter Suderman warns, "inevitably leads to a media that props up the government." Maybe inevitably puts it too strongly, since a newspaper might seek to prove its independence by going out of its way to criticize the government it depends on. Either way, however, the paper's impartial and objective news judgment has been impaired as a result of going on the dole.

When the Bay State Banner, Boston's only black-owned newspaper, was on the verge of shutting down last July, Mayor Thomas Menino kept it alive with a loan of $200,000 in public funds. Did the Banner's gratitude to the mayor affect its autonomy? In April the paper had thundered, "No self-respecting African American can vote for Menino if he chooses to run again" -- yet in September it conspicuously sat on its hands, making no endorsement in the mayoral primary. By January, it was flattering Menino for his pursuit of "innovative ideas" and hailing him as Boston's "most productive" mayor ever. The Banner's publisher insisted that the loan had not affected his editorial stance, but not everyone was convinced. When it comes to Menino, blogged Colman Herman for MassINC, a respected Boston think tank, "the Bay State Banner . . . has turned from watchdog to lapdog."

No, the press cannot be "helped" with government largesse, not without undermining its objectivity or its reputation -- or both. As it is, the news business is strewn with ethical hazards and threats to journalistic integrity. Trading independence for indebtedness would only make things worse.