'Clunkers' was a classic government folly 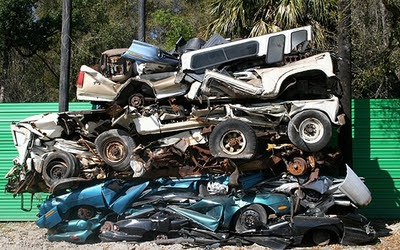 IN THE MARKET for a used car? Good luck finding a bargain: The price of "pre-owned" vehicles has climbed considerably over the past year. According to Edmunds.com, a website for car-buyers, a 3-year-old automobile today will set you back, on average, close to $20,000 -- a spike of more than 10 percent since last summer. For some popular models, the increase has been much steeper. In July, a used Cadillac Escalade was going for around $35,000, or nearly 36 percent over last July's price.

Why are used-car prices rocketing? Part of the answer is that demand is up: With unemployment high and the economy uncertain, some car-buyers who might otherwise be looking for a new truck or SUV are instead shopping for a used vehicle as a way to save money.

But an even bigger part of the answer is that the supply of used cars is far lower than it would be if your Uncle Sam hadn't decided last year to destroy hundreds of thousands of perfectly good automobiles as part of its hare-brained Car Allowance Rebate System -- or, as most of us called it, Cash for Clunkers. That was the program under which the government paid consumers up to $4,500 when they traded in an old car and bought a new one with better gas mileage. The traded-in cars -- which had to be in drivable condition to qualify for the rebate -- were then demolished: Dealers were required to chemically wreck each car's engine, and send the car to be crushed or shredded.

Congress and the Obama administration trumpeted Cash for Clunkers as a triumph -- the president pronounced it "successful beyond anybody's imagination." Which it was, if you define success as getting people to take "free" money to make a purchase most of them are going to make anyway, while simultaneously wiping out productive assets that could provide value to many other consumers for years to come. By any rational standard, however, this program was sheer folly.

No great insight was needed to realize that Cash for Clunkers would work a hardship on people unable to afford a new car. "All this program did for them," I wrote last August, "was guarantee that used cars will become more expensive. Poorer drivers will be penalized to subsidize new cars for wealthier drivers." Alec Gutierrez, a senior analyst for Kelley Blue Book, predicted that used-car prices would surge by up to 10 percent. "It's going to drive prices up on some of the most affordable vehicles we have on the road," he told USA Today. In short, Washington spent nearly $3 billion to raise the price of mobility for drivers on a budget.

To be sure, Cash for Clunkers gave a powerful jolt to car sales in July and August of 2009. But it did so mostly by delaying sales that would otherwise have occurred in April, May, and June, or by accelerating those that would have taken place in September, October, or later. "Influencing the timing of consumers' durable purchases is easy," Edmunds CEO Jeremy Anwyl commented a few days ago in a blog post looking back at the program. "Creating new purchases is not." Of the 700,000 cars purchased during the clunkers frenzy, the estimated net increase in sales was only 125,000. Each incremental sale thus ended up costing the taxpayers a profligate $24,000.

Even on environmental grounds, Cash for Clunkers was an exorbitant dud.

Researchers at the University of California-Davis calculated that the reduction of carbon dioxide attributable to the program (under best-case assumptions) cost at least $237 per ton. That is more than 10 times the going rate on the international market, where carbon emissions credits currently cost about $20 per ton. 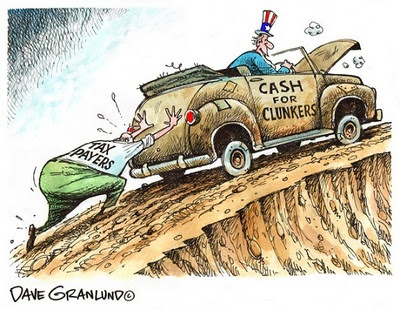 Using Department of Transportation figures, meanwhile, the Associated Press calculated that replacing low-mpg "clunkers" with new cars getting higher mileage would reduce CO2 emissions by around 700,000 tons a year -- less than Americans emit in a single hour. Likewise, the projected reduction in gasoline use amounted to about as much as Americans go through in 4½ hours. (And that's only if you assume -- contrary to historical experience -- that fuel consumption decreases when fuel efficiency rises.)

When all is said and done, Cash for Clunkers was a deplorable exercise in budgetary wastefulness, asset destruction, environmental irrelevance, and economic idiocy. Other than that, it was a screaming success.