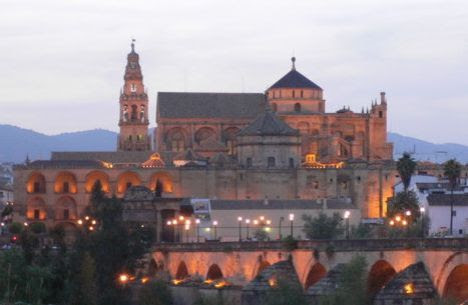 The Church – Cathedral of Cordoba Spain, popularly know as the Mosque of Cordoba or the “Mezquita”, stands over a Christian church built in the Visigothic period (5th C).

The HISTORY OF ISLAM may hold answers to WHY it is so important for
Moslems to build that GROUND ZERO MOSQUE..

In 630, Muhammad led 10,000 Muslim soldiers into Mecca and turned the
pagans' most prominent spot, the Ka'aba, into the Masjid al-Haram Mosque.

In 634, Rightly Guided Caliph Umar conquered Syria and turned the
Christians' most prominent spot, the Church of Job, famous for being
visited by Saint Silva in the fourth century, into the Mosque of Job.

In 637, Caliph Umar conquered Hebron and turned the second-most
prominent spot in Judaism, the Cave of the Patriarchs, into the Ibrahimi
Mosque. (This was repeated by Saladin in 1188.)

In 691, Caliph Al-Malik ordered the _Dome of the Rock_ built on the most
prominent spot in Judaism, the Temple Mount, followed by Caliph Al-Walid
building the Al-Aqsa Mosque there in 705.

In 651, Muslims conquered Persia and turned Zoroastrian temples in
Bukhara and Istakhr into mosques.

In 706, after Muslims took Damascus from the Byzantine Empire, Caliph
Al-Walid turned the prominent Orthodox Church of St. John the Baptist
into the Umayyad Mosque.

In 784, after the conquest of Spain, Emir Abd ar-Rahman turned the
prominent Visigothic Christian Church of Saint Vincent into the Great
Aljama Mosque of Cordoba. After the conquest of Egypt, Caliphs al-Mamun
(813-833) and al-Hakim (996-1021) turned prominent Coptic Christian
churches and Jewish synagogues in Cairo into mosques.

In 831, Muslims conquered Palermo, Sicily, and Asad ibn al-Furat turned
the prominent Church of Saint Mary of the Assumption into the Great
Mosque of Bal'harm. In 1193, Muslims conquered Delhi, India, and
Qutbuddin Aibak turned the Red Citadel in Dhillika, the most prominent
spot of the last Hindu rulers, into the Qutb Minar Mosque.

From 1250-1517, Mamluk Muslims controlled the Golan Heights and used
the ancient Synagogue of Katzrin as a mosque.

In 1387, Turkish Muslims conquered Thessaloniki and turned the
Katholikon Monastery and the Church of Aghia Sophia, which housed the
relics of Saint Gregorios Palamas, into mosques, as Symeon of
Thessaloniki recorded: "The greatest number of the buildings of the
churches fell to them, of which _the first_ was the Holy Church of the
Savior. â€¦ These were trampled underfoot and the infidels rejoiced in
them. â€¦ Most of thhe religious buildings in the city were despoiled,
while altars were demolished and sacred things profaned."

On May 29, 1453, Sultan Mehmet II conquered Constantinople and turned
the great Byzantine church, Hagia Sophia, into the Ayasofya Mosque. The
_largest_ church in Christendom for a thousand years, the church's four
acres of gold mosaics were covered with whitewash and Quran verses.

In 1458, Sultan Mehmet II conquered Athens and turned the Greeks' most
prominent spot, the Parthenon on Acropolis hill, into a mosque. When
Venetian Gen. Francesco Morosini drove the Muslims out in 1687, a
cannonball hit the gunpowder stored in the mosque, blowing it up. In the
15th century, Ottoman invaders turned Saint Clement's Macedonian
Orthodox Monastery in Plaosnik, Balkans, into the Imater Mosque.

From 1519-1858, Muslim Mughal rulers gained control of India and turned
over 2,000 Hindu temples into mosques, including demolishing the Temple
of Ram Janmabhoomi in Ayodhya, the birthplace of Rama, and replacing it
with the Babri Mosque. India's Mughal Muslim ruler, Jahangir
(1605-1627), wrote in Tujuk-i-Jahangiri: "At the city of Banaras [was] a
temple. â€¦ I made it my plea for thhrowing down the temple â€¦ and on the
spot, with the very same materials,, I erected the great mosque."

In 1543, Hayreddin Barbarossa's 30,000 Muslim troops wintered in Toulon,
France, and turned the prominent Toulon Cathedral into a mosque.

In 1571, Muslims invaded Famagusta, Cyprus, and turned Saint Nicolas
Cathedral, a rare Gothic church, into the Lala Mustafa Pasha Mosque, and
Saint Sophia Cathedral in Nicosia, constructed in 1228, into the
Selimiye Mosque.

In 1588, Sultan Murat III turned the Eastern Orthodox Church of Saint
John the Forerunner in Constantinople into the Hirami Ahmet Pasha Mosque.

In 1781, after having conquered the Old City of Acre, Ottoman Muslims
turned the Roman Catholic church built by Crusaders into the Jezzar
Ahmet Pasha Mosque, where a hair from Muhammad's beard is preserved.

In 1923, Muslims expelled Greeks from Turkey and turned Orthodox
churches into mosques. In World War II, Nazis allied with Bosnians and
turned the prominent Artists' Gallery Museum in Zagreb, Croatia, into a
mosque.

In the 1950s, Muslims expelled Jews from Arab lands and turned
synagogues into mosques. Algerian Muslims warred against French colonial
rule till France pulled out in 1962, after which the Cathedral of St.
Philippe was turned into the Ketchaoua Mosque. Violence against Jews
caused 30,000 to flee and the Great Synagogue of Oran was turned into
the Mosque Abdellah Ben Salem.

In 1974, Turkish Muslims invaded northern Cyprus, and prominent Greek
Orthodox churches were turned into mosques. In 1981, Muslim immigrants
to the Netherlands converted Amsterdam's historic Catholic
Sint-Ignatiuskerk into the Fatih Mosque, and a synagogue in The Hague
into the Aksa Mosque.

William J. Federer is the author of: "What Every American Needs to Know
About the Quran: A History of Islam and the United States."