HEALTH CZARINA KATHLEEN SEBELIUS HAS NEVER HEARD OF THE FIRST AMENDMENT OF THE U.S. CONSTITUTION 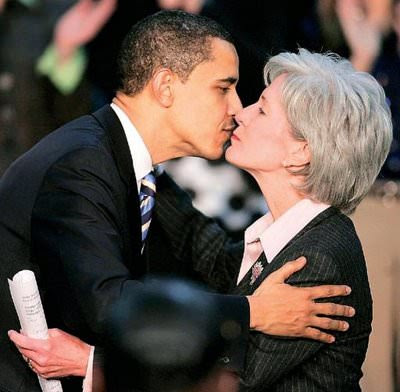 "There will be zero tolerance for this type of misinformation and unjustified rate increases." That sounds like a stern headmistress dressing down some sophomores who have been misbehaving. But it's actually from a letter sent Thursday from Health and Human Services Secretary Kathleen Sebelius to Karen Ignagni, president of America's Health Insurance Plans -- the chief lobbyist for private health insurance companies.
Sebelius objects to claims by health insurers that they are raising premiums because of increased costs imposed by the Obamacare law passed by Congress last March.
She acknowledges that many of the law's "key protections" take effect later this month and does not deny that these impose additional costs on insurers. But she says that "according to our analysis and those of some industry and academic experts, any potential premium impact ... will be minimal."
Well, that's reassuring. Er, except that if that's the conclusion of "some" industry and academic experts, it's presumably not the conclusion of all industry and academic experts, or the secretary would have said so.
Sebelius also argues that "any premium increases will be moderated by out-of-pocket savings resulting from the law." But she's pretty vague about the numbers -- "up to $1 billion in 2013." Anyone who watches TV ads knows that "up to" can mean zero.
As Time magazine's Karen Pickert points out, Sebelius ignores the fact that individual insurance plans cover different types of populations. So that government and "some" industry and academic experts think the new law will justify increases averaging 1 percent or 2 percent, they could justify much larger increases for certain plans.
Or as Ignagni, the recipient of the letter, says, "It's a basic law of economics that additional benefits incur additional costs."
But Sebelius has "zero tolerance" for that kind of thing. She promises to issue regulations to require "state or federal review of all potentially unreasonable rate increases" (which would presumably mean all rate increases).
And there's a threat. "We will also keep track of insurers with a record of unjustified rate increases: those plans may be excluded from health insurance Exchanges in 2014."
That's a significant date, the first year in which state insurance exchanges are slated to get a monopoly on the issuance of individual health insurance policies. Sebelius is threatening to put health insurers out of business in a substantial portion of the market if they state that Obamacare is boosting their costs.
"Congress shall make no law," reads the First Amendment, "abridging the freedom of speech, or of the press."
Sebelius' approach is different: "zero tolerance" for dissent.
The threat to use government regulation to destroy or harm someone's business because they disagree with government officials is thuggery. Like the Obama administration's transfer of money from Chrysler bondholders to its political allies in the United Auto Workers, it is a form of gangster government.
"The rule of law, or the rule of men (women)?" economist Tyler Cowen asks on his marginalrevolution.com blog. As he notes, "Nowhere is it stated that these rate hikes are against the law (even if you think they should be), nor can this 'misinformation' be against the law."
According to Politico, not a single Democratic candidate for Congress has run an ad since last April that makes any positive reference to Obamacare. The First Amendment gives candidates the right to talk -- or not talk -- about any issue they want.
But that is not enough for Sebelius and the Obama administration. They want to stamp out negative speech about Obamacare. "Zero tolerance" means they are ready to use the powers of government to threaten economic harm on those who dissent.
The closing paragraph of Sebelius's letter to AHIP's Karen Ignagni gives the game away. "We worked hard to change the system to help consumers." This is a reminder that the administration alternatively collaborated with and criticized Ignagni's organization. We roughed you up a little, but we eventually made a deal.
The secretary goes on: "It is my hope we can work together to stop misinformation and misleading marketing from the start." In other words, shut your members up and play team ball -- or my guys with the baseball bats and Tommy guns are going to get busy. As Cowen puts it, "worse than I had been expecting."

Michael Barone is senior political analyst for The Washington Examiner.
COPYRIGHT 2010 THE WASHINGTON EXAMINER
Posted by Leo Rugiens at 9:15 AM