IF YOU THINK THAT OBAMA THINKS LIKE AN AMERICAN, YOU HAVE ANOTHER THINK COMING 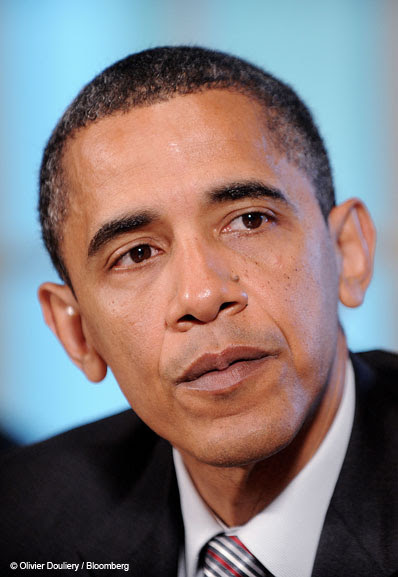 The President isn't exactly a socialist. So what's driving his hostility to private enterprise? Look to his roots.

Barack Obama is the most antibusiness president in a generation, perhaps in American history. Thanks to him the era of big government is back. Obama runs up taxpayer debt not in the billions but in the trillions. He has expanded the federal government's control over home mortgages, investment banking, health care, autos and energy. The Weekly Standard summarizes Obama's approach as omnipotence at home, impotence abroad.
The President's actions are so bizarre that they mystify his critics and supporters alike. Consider this headline from the Aug. 18, 2009 issue of the Wall Street Journal: "Obama Underwrites Offshore Drilling." Did you read that correctly? You did. The Administration supports offshore drilling--but drilling off the shores of Brazil. With Obama's backing, the U.S. Export-Import Bank offered $2 billion in loans and guarantees to Brazil's state-owned oil company Petrobras to finance exploration in the Santos Basin near Rio de Janeiro--not so the oil ends up in the U.S. He is funding Brazilian exploration so that the oil can stay in Brazil.
More strange behavior: Obama's June 15, 2010 speech in response to the Gulf oil spill focused not on cleanup strategies but rather on the fact that Americans "consume more than 20% of the world's oil but have less than 2% of the world's resources." Obama railed on about "America's century-long addiction to fossil fuels." What does any of this have to do with the oil spill? Would the calamity have been less of a problem if America consumed a mere 10% of the world's resources?
The oddities go on and on. Obama's Administration has declared that even banks that want to repay their bailout money may be refused permission to do so. Only after the Obama team cleared a bank through the Fed's "stress test" was it eligible to give taxpayers their money back. Even then, declared Treasury Secretary Tim Geithner, the Administration might force banks to keep the money.

The President continues to push for stimulus even though hundreds of billions of dollars in such funds seem to have done little. The unemployment rate when Obama took office in January 2009 was 7.7%; now it is 9.5%. Yet he wants to spend even more and is determined to foist the entire bill on Americans making $250,000 a year or more. The rich, Obama insists, aren't paying their "fair share." This by itself seems odd given that the top 1% of Americans pay 40% of all federal income taxes; the next 9% of income earners pay another 30%. So the top 10% pays 70% of the taxes; the bottom 40% pays close to nothing. This does indeed seem unfair--to the rich.
Obama's foreign policy is no less strange. He supports a $100 million mosque scheduled to be built near the site where terrorists in the name of Islam brought down the World Trade Center. Obama's rationale, that "our commitment to religious freedom must be unshakable," seems utterly irrelevant to the issue of why the proposed Cordoba House should be constructed at Ground Zero.
Recently the London Times reported that the Obama Administration supported the conditional release of Abdel Baset al-Megrahi, the Lockerbie bomber convicted in connection with the deaths of 270 people, mostly Americans. This was an eye-opener because when Scotland released Megrahi from prison and sent him home to Libya in August 2009, the Obama Administration publicly and appropriately complained. The Times, however, obtained a letter the Obama Administration sent to Scotland a week before the event in which it said that releasing Megrahi on "compassionate grounds" was acceptable as long as he was kept in Scotland and would be "far preferable" to sending him back to Libya. Scottish officials interpreted this to mean that U.S. objections to Megrahi's release were "half-hearted." They released him to his home country, where he lives today as a free man.
One more anomaly: A few months ago nasa Chief Charles Bolden announced that from now on the primary mission of America's space agency would be to improve relations with the Muslim world. Come again? Bolden said he got the word directly from the President. "He wanted me to find a way to reach out to the Muslim world and engage much more with dominantly Muslim nations to help them feel good about their historic contribution to science and math and engineering." Bolden added that the International Space Station was a model for nasa's future, since it was not just a U.S. operation but included the Russians and the Chinese. Obama's redirection of the agency caused consternation among former astronauts like Neil Armstrong and John Glenn, and even among the President's supporters: Most people think of nasa's job as one of landing on the moon and Mars and exploring other faraway destinations. Sure, we are for Islamic self-esteem, but what on earth was Obama up to here?
Theories abound to explain the President's goals and actions. Critics in the business community--including some Obama voters who now have buyer's remorse--tend to focus on two main themes. The first is that Obama is clueless about business. The second is that Obama is a socialist--not an out-and-out Marxist, but something of a European-style socialist, with a penchant for leveling and government redistribution.
Anticolonialists hold that even when countries secure political independence they remain economically dependent on their former captors. This dependence is called neocolonialism, a term defined by the African statesman Kwame Nkrumah (1909--72) in his book Neocolonialism: The Last Stage of Imperialism. Nkrumah, Ghana's first president, writes that poor countries may be nominally free, but they continue to be manipulated from abroad by powerful corporate and plutocratic elites. These forces of neocolonialism oppress not only Third World people but also citizens in their own countries. Obviously the solution is to resist and overthrow the oppressors. This was the anticolonial ideology of Barack Obama Sr. and many in his generation, including many of my own relatives in India.
Obama Sr. was an economist, and in 1965 he published an important article in the East Africa Journal called "Problems Facing Our Socialism." Obama Sr. wasn't a doctrinaire socialist; rather, he saw state appropriation of wealth as a necessary means to achieve the anticolonial objective of taking resources away from the foreign looters and restoring them to the people of Africa. For Obama Sr. this was an issue of national autonomy. "Is it the African who owns this country? If he does, then why should he not control the economic means of growth in this country?"
As he put it, "We need to eliminate power structures that have been built through excessive accumulation so that not only a few individuals shall control a vast magnitude of resources as is the case now." The senior Obama proposed that the state confiscate private land and raise taxes with no upper limit. In fact, he insisted that "theoretically there is nothing that can stop the government from taxing 100% of income so long as the people get benefits from the government commensurate with their income which is taxed."
Remarkably, President Obama, who knows his father's history very well, has never mentioned his father's article. Even more remarkably, there has been virtually no reporting on a document that seems directly relevant to what the junior Obama is doing in the White House.

While the senior Obama called for Africa to free itself from the neocolonial influence of Europe and specifically Britain, he knew when he came to America in 1959 that the global balance of power was shifting. Even then, he recognized what has become a new tenet of anticolonialist ideology: Today's neocolonial leader is not Europe but America. As the late Palestinian scholar Edward Said--who was one of Obama's teachers at Columbia University--wrote in Culture and Imperialism, "The United States has replaced the earlier great empires and is the dominant outside force."
From the anticolonial perspective, American imperialism is on a rampage. For a while, U.S. power was checked by the Soviet Union, but since the end of the Cold War, America has been the sole superpower. Moreover, 9/11 provided the occasion for America to invade and occupy two countries, Iraq and Afghanistan, and also to seek political and economic domination in the same way the French and the British empires once did. So in the anticolonial view, America is now the rogue elephant that subjugates and tramples the people of the world.
It may seem incredible to suggest that the anticolonial ideology of Barack Obama Sr. is espoused by his son, the President of the United States. That is what I am saying. From a very young age and through his formative years, Obama learned to see America as a force for global domination and destruction. He came to view America's military as an instrument of neocolonial occupation. He adopted his father's position that capitalism and free markets are code words for economic plunder. Obama grew to perceive the rich as an oppressive class, a kind of neocolonial power within America. In his worldview, profits are a measure of how effectively you have ripped off the rest of society, and America's power in the world is a measure of how selfishly it consumes the globe's resources and how ruthlessly it bullies and dominates the rest of the planet.
For Obama, the solutions are simple. He must work to wring the neocolonialism out of America and the West. And here is where our anticolonial understanding of Obama really takes off, because it provides a vital key to explaining not only his major policy actions but also the little details that no other theory can adequately account for.
Why support oil drilling off the coast of Brazil but not in America? Obama believes that the West uses a disproportionate share of the world's energy resources, so he wants neocolonial America to have less and the former colonized countries to have more. More broadly, his proposal for carbon taxes has little to do with whether the planet is getting warmer or colder; it is simply a way to penalize, and therefore reduce, America's carbon consumption. Both as a U.S. Senator and in his speech, as President, to the United Nations, Obama has proposed that the West massively subsidize energy production in the developing world.
Posted by Leo Rugiens at 11:19 AM