Lessons of the Koran's non-burning 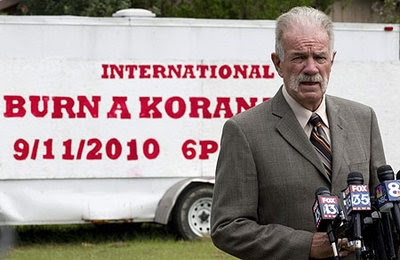 TERRY JONES'S 15 minutes of fame have run out, the foreign media have left Gainesville, and we aren't likely to hear much more about the fringe Florida preacher and his abandoned plan to burn copies of the Koran on Sept. 11.

But as Jones and his non-bonfire recede in the rear-view mirror, there are some lessons worth taking away from the whole episode. Here are three:

1. While it's fashionable in some precincts to smear Americans as a nation of Islamophobes whose bigotry plays into the hands of extremists, the reverse is closer to the truth. A nation of Islamophobes would have rallied around Jones and his benighted band, but Americans of every stripe condemned them. Jones's proposed "stunt," President Obama said in a TV interview, is "completely contrary to our values." Attorney General Eric Holder called it "idiotic and dangerous." Secretary of State Hillary Clinton slammed it as "outrageous and . . . disgraceful."

The administration's denunciations were echoed across the political and social spectrum -- by Sarah Palin and Franklin Graham, by Angelina Jolie and Glenn Beck, by the National Council of Churches, the Jewish Council for Public Affairs, and the National Association of Evangelicals. The mayor of Gainesville called Jones's group "an embarrassment to the community." There was criticism from Florida's Republican and Democratic gubernatorial candidates and from dozens of members of Congress. The conservative Manchester Union Leader labeled the Koran-burning idea "deadly stupid." The liberal Los Angeles Times implored: "Don't fan the flames."

Americans hear frequently that they are a people hopelessly and endlessly divided, arguing with each other across gaping political and cultural chasms. But they weren't divided on this. If Jones accomplished nothing else, he has reminded us that there are still some issues on which nearly all Americans agree.

2. You don't have to admire Islam or revere the Koran to have regarded Jones's talk of book-burning as barbaric. "Where they burn books," the German poet and playwright Heinrich Heine wrote in 1821, "they will ultimately burn people also." Heine's works were among the tens of thousands of books torched in public bonfires by the Nazis after their accession to power in 1933 -- and Hitler and his followers did indeed "ultimately burn people also."

This is not to say that everyone who burns a book eventually sheds blood. But the depravity of book-burning inescapably suggests more deadly evils. The brutal lust to suppress, the hatred of free thought and expression, the manic determination to physically annihilate disfavored ideas rather than challenge them intellectually -- from these to the destruction of human beings is no very great leap. Only the imbecilic preach, like Jones, that "Islam is of the devil" (he says the same, incidentally, about Hinduism, Buddhism, and Judaism). Setting books on fire, however, really is diabolical.

3. In the effort to get Jones to back down, great stress was laid on the danger of a backlash by Muslim fanatics. General David Petraeus warned that "images of the burning of a Koran would undoubtedly be used by extremists in Afghanistan . . . to inflame public opinion and incite violence." Defense Secretary Robert Gates phoned Jones to express "grave concern" that a Koran-burning could put American personnel at risk. The president himself called it "a way of endangering our troops -- our sons and daughters, fathers and mothers, husbands and wives who are sacrificing for us to keep us safe."

But since when do US officials tell Americans or anyone else not to do something because unhinged radicals won't like it? Jihadist violence was erupting long before Jones appeared on the scene. There is no end to the pretexts used by Islamist extremists "to inflame public opinion and incite violence." Danish cartoons, Iraqi elections, a papal lecture, a beauty pageant, even a teddy bear named "Muhammad" -- Muslim militants have raged, sometimes lethally, against them all. Osama bin Laden did not declare war on the United States because of a publicity-seeker's antics in Florida.

Jones's threat to burn the Koran was ugly and offensive. It deserved to be reviled as an affront to civility, to American values, and to the millions of good Muslims who stand with us in the war against the radicals. But it is never right for the president or his aides to pressure US citizens into silencing themselves or stifling their liberties in order to conciliate violent zealots. If the years since 9/11 have taught us anything, it is that jihadists must be resisted, not appeased.