PRESIDENT GEORGE BUSH WILL BE MISSED FOR HIS BEDROCK DECENCY; HE HAD A CHARGE TO KEEP AND HE KEPT IT

He had a charge to keep, and he kept it.

President Bush will soon be heading home and for many that day cannot come soon enough. Count me among those who will miss him and his bedrock decency. 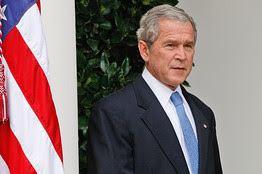 He had a rough road from day one. His first inauguration struck me as a portent. I was there, shivering in the grandstands on Pennsylvania Avenue. At the exact moment the president heard "Hail to the Chief" for the first time and was announced to the audience, a sleet storm descended from the skies.

It has never let up.

Through it all Mr. Bush kept his head up and soldiered on. He took the criticism in stride. I remember riding with him in his presidential limousine to the Washington Hilton for a speech. A woman standing at an intersection directed an obscene gesture at him that I had hoped he missed. The president waved to her and with a bemused look said to me, "Did you see what she did?"

Many other Americans, particularly the "values voters" who helped elect him twice, will miss him because of what he achieved: Samuel Alito and John Roberts on the Supreme Court, children in schools that now are better because they are accountable, African women who now have medicines for their HIV-infected babies, and religious charities that are finally being treated by government as partners instead of rivals.

I remember coming to the West Wing one morning before the daily 7:30 senior staff meeting and seeing Mr. Bush at his desk in the Oval Office, reading a daily devotional. I remember the look of sorrow on his face as he signed letters to the families of the fallen. When he met with recovering addicts whose lives were transformed by a faith-based program, he spoke plainly of his own humiliating journey years ago with alcohol. When a Liberian refugee broke into tears after recounting her escape to freedom in America, the president went over and held and comforted her.

Little acts behind the curtain like these inspired intense loyalty by staff members. They spoke of someone never too busy or burdened to care -- like when he took time on Air Force One to call my wife when she was sick. The president's true character rendered his media image pure caricature.

Mother Teresa was asked at the end of her life whether she was discouraged because after decades of caring for the dying and destitute in Calcutta little seemed to have changed. She replied, "No. God doesn't call me to be successful. God calls me to be faithful."

History will decide whether George W. Bush was a successful President. But he was faithful. He had a charge to keep and he kept it.

Mr. Towey was director of the White House Office of Faith-Based and Community Initiatives from 2002-2006. He is president of Saint Vincent College in Latrobe, Pa.