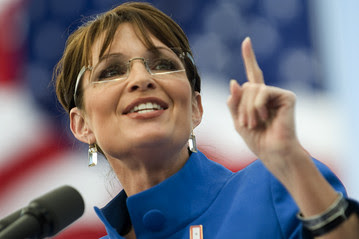 The 2008 presidential campaign may be over, but Sarah Palin's moment in the spotlight has yet to run its course.

In a media marathon last week, the Republican Party's vice presidential nominee sat down for interviews with CNN's Larry King and Wolf Blitzer; had Matt Lauer of the “Today” show up to Wasilla for a family dinner; and told Fox News's Greta Van Susteren about getting the call from John McCain on her cellphone while she was admiring the local produce at the Alaska State Fair. She disdained the Republican “jerks” who spread anonymous rumors painting her as geographically illiterate, and vehemently denied the accusation that she had milked the campaign for a $150,000 wardrobe for herself and her family.

All that was a prelude to her star turn at the Republican Governors Association meeting in Miami, where she met reporters at a press conference, drew standing ovations from several hundred GOP donors, and humorously updated her fellow governors on what she'd been doing since last year's meeting.

“I had a baby,” she told them. “I did some traveling; I very briefly expanded my wardrobe; I made a few speeches; I met a few VIPs, including those who really impact society, like Tina Fey.”

Of course she was asked whether she plans to run for president in 2012, and of course she deflected the question. “The future is not that 2012 presidential race; it's next year and our next budgets,” she said. But there can't be much doubt that Palin has become the brightest star in the GOP firmament. A whopping 91 percent of Republicans have a favorable view of her, according to a recent Rasmussen poll, and she is the runaway favorite when they are asked to rank possible contenders for the party's 2012 presidential nominee.

Elsewhere, however, the savaging of Palin continues. In The New York Times, Maureen Dowd devotes yet another column to bashing Alaska's governor (“a shopaholic whack-job diva”). The popular Washington blog Wonkette, characteristically crude, pronounces her “human garbage.” At TheAtlantic.com, an obsessed Andrew Sullivan calls her “deluded and delusional . . . clinically unhinged” and describes her as a nitwit with “the educational level of a high school dropout” who “regards ignorance as some kind of achievement.”

Not everyone on the left is in a gibbering rage over Palin. The feminist social critic Camille Paglia, a pro-choice Democrat, is appalled by the Democrats' anti-Palin debauch, especially their attacks on her intelligence. “As a career classroom teacher, I can see how smart she is,” Paglia writes, “and, quite frankly, I think the people who don't see it are the stupid ones, wrapped in the fuzzy mummy-gauze of their own worn-out partisan dogma.”

After witnessing the poise, energy, and panache with which John McCain's 44-year-old running mate handled herself on the national stage, can the backbiters working overtime to trash her intellect really believe she is nothing but a vain and ignorant airhead? Well, maybe; partisans and ideologues are good at seeing only what they want to see. But they might want to recall that the last Republican to inspire such ardor and admiration among the party faithful -- Ronald Reagan -- was also derided as a dim bulb. Diplomat Clark Clifford called Reagan an “amiable dunce.” The New Republic's Robert Wright viewed him as “virtually brain dead.” Nicholas von Hoffman lamented that it was “humiliating to think of this unlettered, self-assured bumpkin being our president.” That “bumpkin” became one of the greatest presidents of the 20th century.

I suspect that the loathing of Palin by so much of the opinion elite is driven not by contempt for her brainpower but by fear of her political potential. She is cheerful and charismatic, an unabashed and likable conservative who generates extraordinary grassroots enthusiasm. Tens of thousands of voters showed up at her campaign rallies, and even now, when she appears on TV, record-breaking numbers of viewers tune in. “Her politics aren't my politics,” said Lorne Michaels, the creator and executive producer of “Saturday Night Live,” after Palin's appearance on the show. But “I watched the way she connected with people, and she's powerful.”

Whether Palin has the skill and stamina it would take to win a presidential nomination, let alone capture the White House, it is way too early to tell. But the smart money says she is a force to be reckoned with. That may be just what her critics are afraid of.