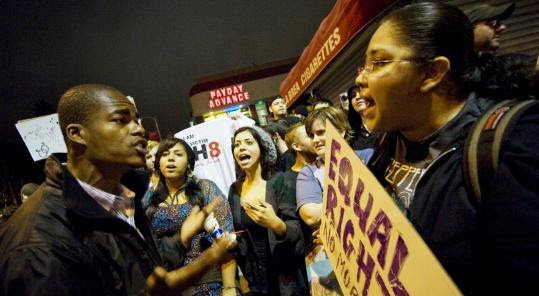 California voters on Election Day approved Proposition 8, which bans same-sex marriage in the

state. News of the proposition's passage caused protests like this one in Los Angeles on

It has been widely noted that black voters put California's Proposition 8 over the top last week, with nearly 7 out of 10 voting in favor of the constitutional amendment defining marriage as the union of one man and one woman. As the magnitude of black opposition to same-sex marriage became clear on Election Day, blogger Andrew Sullivan, a prominent gay-marriage champion, reacted bitterly:

"Every ethnic group supported marriage equality," he wrote, "except African-Americans, who voted overwhelmingly against extending to gay people the civil rights once denied them."

Well, let's see. The civil rights once denied to black Americans included the right to register as a voter, the right to cast a ballot, the right to use numerous public facilities, the right to get a fair hearing in court, the right to send their children to an integrated public school, and the right to equal opportunity in housing and employment. Have gay people been denied any of these rights? Have they been forced to sit in the back of buses? Confined to segregated neighborhoods? Barred from serving on juries? Subjected to systematic economic exploitation?

Plainly, declining to change the timeless definition of marriage deprives no one of "the civil rights once denied" to blacks, and it is an absurdity to claim otherwise. It is also a poisonous slur: For if opposing same-sex marriage is like opposing civil rights, then voters who backed Proposition 8 are no better than racists, the moral equivalent of those who turned the fire hoses on blacks in Birmingham in 1963.

Which is, of course, exactly what proponents of same-sex marriage contend.

It has become routine for the defenders of traditional wedlock to be cast as the worst sort of hateful bigots, "gladly donning the roles played by Lester Maddox and George Wallace in the civil rights era," to quote The New York Times's Frank Rich. Anyone who insists that marriage can only mean the union of male and female -- and "anyone" now includes a majority of voters in 30 of the 30 states where marriage amendments have been on the ballot -- can expect to be told that they are no better than racists, modern-day segregationists motivated by malevolence and an evil heart.

Thus, supporters of same-sex marriage regularly referred to the California ballot measure as "Proposition Hate," while a group calling itself "Californians Against Hate" launched a website to publicize the names and addresses of donors to the Yes-on-8 campaign. Yet it was the foes of Proposition 8 whose hatred and intolerance were most vividly on display. Signs promoting the amendment were stolen or defaced, churches were vandalized, and at least one supporter of the amendment ended up in the hospital after being beaten by an assailant screaming: "What do you have against gays?"

For sheer hatefulness and bigotry, however, nothing surpassed the anti-Proposition 8 television ad that depicted two Mormon missionaries forcing their way into the home of a married lesbian couple.

"Hi, we're here from the Church of Jesus Christ of Latter-day Saints," one of the Mormons says. "We're here to take away your rights," says the other.

The missionaries pull the wedding rings from the women's fingers, then proceed to ransack the house, looking for their marriage license. When they find it, they triumphantly tear it up.

"Hey, we have rights," one of the women protests.

"Not if we can help it," one of the missionaries smugly replies.

As the commercial ends, a message appears on the screen: “Say NO to a church taking over your government.”

Or perhaps it is because they understand that a fundamental gulf separates the civil rights movement from the demand for same-sex marriage. One was a fight for genuine equality, for the right of black Americans to live on the same terms, and under the same restrictions, as whites. The other is a demand to change the terms on which marriage has always been available by giving it a meaning it has never before had. That isn't civil rights -- and playing the race card doesn't change that fact.