AMERICA WON'T FAIL, NOT IMMEDIATELY, IT WILL LINGER ON IN A TWILIGHT EXISTENCE, SCLEROTIC AND INEFFECTUAL, DECLINING INTO A KIND OF SOCIETAL DEMENTIA. 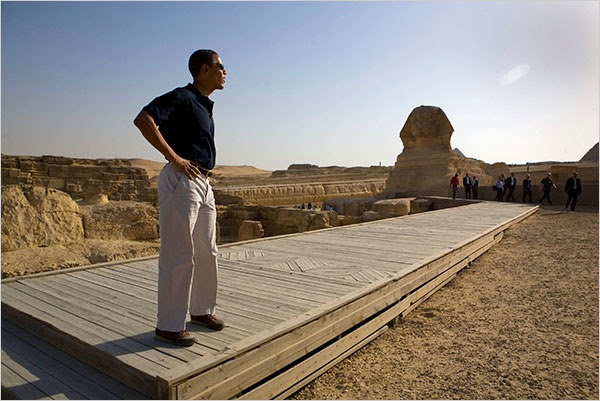 As recently as last summer,
General Motors Corp.'s filing for bankruptcy
would have been the biggest news story of the week.
But it's not such a very great step from the unthinkable to the inevitable,
and by the time it actually happened,
the market barely noticed and the media were focused on the president's "address to the Muslim world."

As it happens, these two stories are the same story -
snapshots, at home and abroad, of the hyperpower in eclipse.
It's been a long time since anyone touted GM
as the emblematic brand of America - what's good for GM is good for America, etc.
In fact, it's more emblematic than ever:
Like GM, the U.S. government spends more than it makes and has airily committed itself to ever more unsustainable levels of benefits.
GM has about 95,000 workers but provides health benefits to a million people.
It's not a business enterprise, but a vast welfare plan with a tiny loss-making commercial sector.
As GM goes, so goes America?

But who cares? Overseas, the coolest president in history was giving a speech. Or, as the official press release headlined it on the State Department Web site, "President Obama Speaks To The Muslim World From Cairo."

Let's pause right there:
It's interesting how easily the words "the Muslim world"
roll off the tongues of liberal secular progressives who would choke
on any equivalent reference to "the Christian world."
When such hyperalert policemen of the perimeter between church and state
endorse the former but not the latter,
they're implicitly acknowledging that Islam is not merely a faith, but a political project, too.

There is an Organization of the Islamic Conference, which already is the largest single voting bloc at the United Nations and is still adding new members. Imagine if someone proposed an Organization of the Christian Conference that would hold summits attended by prime ministers and presidents and vote as a bloc in transnational bodies. But, of course, there is no "Christian world": Europe is largely post-Christian, and, as Mr. Obama bizarrely asserted to a European interviewer last week, America is "one of the largest Muslim countries in the world." Perhaps we're eligible for membership in the OIC.

I suppose the benign interpretation is that, as head of state of the last superpower, Mr. Obama is indulging in a little harmless condescension. In his Cairo speech, he congratulated Muslims on inventing algebra and quoted approvingly one of the less bloodcurdling sections of the Koran. I found myself recalling that moment in the long twilight of the Habs- burg Empire when Crown Prince Rudolph and his mistress were found dead at the royal hunting lodge at Mayerling - either a double suicide or something even more sinister. Happily, in the Broadway musical version, instead of being found dead, the star-crossed lovers emigrate to America and settle down on a farm in Pennsylvania.

My old comrade Stephen Fry recently gave an amusing lecture at the Royal Geographical Society in London on the popular Americanism "When life hands you lemons, make lemonade" - or, if something's bitter and hard to swallow, add sugar and sell it. That's what the president did with Islam: He added sugar and sold it.

The speech nevertheless impressed many conservatives, including Rich Lowry, my esteemed editor at National Review, "esteemed editor" being the sort of thing one says before booting the boss in the crotch. Rich thought the president succeeded in his principal task: "Fundamentally, Obama's goal was to tell the Muslim world, 'We respect and value you, your religion and your civilization, and only ask that you don't hate us and murder us in return.' "

But those terms are too narrow. You don't have to murder a guy if he pre-emptively surrenders. You don't even have to hate him if you're too busy despising him. The savvier Muslim potentates have no desire to be sitting in a smelly cave in the Hindu Kush sharing a latrine with a dozen half-witted goatherds while plotting how to blow up the Empire State Building. Nevertheless, they share key goals with the cave dwellers - including the wish to expand the boundaries of "the Muslim world" and (as in the anti-blasphemy push at the United Nations) to place Islam, globally, beyond criticism. The non-terrorist advance of Islam is a significant challenge to Western notions of liberty and pluralism.

Once Mr. Obama moved on from the more generalized Islamo-schmoozing to the details, the subtext - the absence of American will - became explicit. He used the cover of multilateralism and moral equivalence to communicate, consistently, American weakness: "No single nation should pick and choose which nations hold nuclear weapons." Perhaps by "no single nation" he means the "global community" should pick and choose, which means the U.N. Security Council, which means the Big Five, which means that Russia and China will pursue their own murky interests and, in the absence of American leadership, Britain and France will reach their accommodations with a nuclear Iran, a nuclear North Korea and any other psycho-state minded to join them.

On the other hand, a "single nation" certainly has the right to tell another nation anything it wants if that nation happens to be the "Zionist entity": As Hillary Rodham Clinton just instructed Israel in regard to its West Bank communities, there has to be "a stop to settlements - not some settlements, not outposts, not natural-growth exceptions." No "natural growth"? You mean, if you and the missus have a kid, you've got to talk gran'ma into moving out? To Tel Aviv or Brooklyn or wherever?

At a stroke, the administration has endorsed the view of "the Muslim world" of those non-Muslims who find themselves within what it regards as lands belonging to Islam: The Jewish and Christian communities are free to stand still or shrink, but not to grow. Would Mr. Obama be comfortable mandating "no natural growth" to Israel's million-and-a-half Muslims? No. But the administration has embraced commitment of "the Muslim world" to one-way multiculturalism, whereby Islam expands in the West but Christianity and Judaism shrivel remorselessly in the Middle East.

And so it goes. Like GM, America is "too big to fail." So it won't, not immediately. It will linger on in a twilight existence, sclerotic and ineffectual, declining into a kind of societal dementia, unable to keep pace with what's happening and with an ever more tenuous grip on its own past but able on occasion to throw out impressive words, albeit strung together without much meaning: empower, peace, justice, prosperity - just to take one windy gust from the president's Cairo speech.

There's better phrase-making in the current issue of Foreign Affairs, in a coinage of Leslie H. Gelb, president emeritus of the Council on Foreign Relations. Mr. Gelb is a sober, judicious paragon of torpidly conventional wisdom. Nevertheless, musing on American decline, he writes, "The country's economy, infrastructure, public schools, and political system have been allowed to deteriorate. The result has been diminished economic strength, a less vital democracy, and a mediocrity of spirit."

That last is the one to watch: A great power can survive a lot of things, but not "a mediocrity of spirit." A wealthy nation living on the accumulated cultural capital of a glorious past can dodge its rendezvous with fate, but only for a while. That sound you heard in Cairo is the tingy ping of a hollow superpower.
---
THE HOLLOW SUPERPOWER
by Mark Steyn
THE WASHINGTON TIMES
Monday
08 JUNE 09