IN THE END, HISTORY WILL SAY OF THE OBAMAMANIACS WHO ELECTED BARACK HUSSEIN OBAMA IN 2008, "THEY LOVED BIG BROTHER TO THE END." 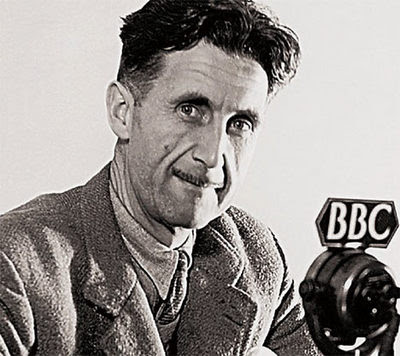 NINETEEN EIGHTY-FOUR opens
with one of the most famous first lines in modern English literature --
the vaguely unnerving
"It was a bright cold day in April, and the clocks were striking thirteen."
The line it ends with is even more famous, and considerably more sinister:
"He loved Big Brother."

George Orwell's brilliant, bitter novel
turns 60 this month,
but after all these years it has lost none of its nightmarish chill.
Its hero is the decidedly unheroic Winston Smith,
a weak and wistful man who lives in the totalitarian police state of Oceania,
which is ruled by the Party
-- personified in Big Brother, whose intimidating image is everywhere --
and in which the Thought Police ruthlessly suppress any hint of dissent.
The Party enforces its will through constant surveillance, relentless propaganda,
and the annihilation of anyone who rebels against its authority,
even if only in private thoughts or conversation.
Winston engages in such thought-crimes,
first by secretly recording his hatred of Big Brother in a diary,
then through a love-affair with a young woman called Julia.
Eventually he is arrested, interrogated, tortured, broken.

Nineteen Eighty-Four was Orwell's warning
of what unchecked state power can become --
a warning informed by the horrors of Nazi Germany and the Soviet Union,
with their contempt for human life and conscience,
their cult of personality, their unremitting cruelty and deceit.
"I do not believe that the kind of society I describe necessarily will arrive, but I believe . . . that something resembling it could arrive,"
Orwell wrote shortly after the book was published.
"I believe also that totalitarian ideas have taken root in the minds of intellectuals everywhere, and I have tried to draw these ideas out to their logical consequences."

Orwell himself was a committed socialist, and he insisted that Nineteen Eighty-Four should not be taken as an attack on socialism or parties of the left. And, in truth, though the ruling ideology in the book is named Ingsoc ("English Socialism" in Oceania's fictional language of Newspeak), the Party's aims have nothing to do with collectivizing wealth, or creating a workers' paradise, or any other socialist prescription.

"The Party seeks power entirely for its own sake," Winston is told by O'Brien, the Party official who interrogates him. "We are not interested in the good of others; we are interested solely in power. Not wealth or luxury or long life or happiness: only power, pure power. . . . We know that no one ever seizes power with the intention of relinquishing it. Power is not a means, it is an end. One does not establish a dictatorship in order to safeguard a revolution; one makes the revolution in order to establish the dictatorship. The object of persecution is persecution. The object of torture is torture. The object of power is power. Now do you begin to understand me?"

Whether or not poor Winston understood, the totalitarians (and would-be totalitarians) of 1949 certainly did. Stalin's Pravda blasted Nineteen Eighty-Four for its supposed "contempt for the people," while the American Communist journal Masses and Mainstream, in a review titled "Maggot-of-the-Month," trashed it as a "diatribe against the human race" and "cynical rot." But in most of the free world it was acclaimed as an instant classic. "No other work of this generation," declared The New York Times in its review, "has made us desire freedom more earnestly or loathe tyranny with such fullness."

Even now, it is hard to think of any novel that can match Nineteen Eighty-Four in its insight into the totalitarian mindset. Orwell captured so much of it: The insatiable lust for power. The lies incessantly broadcast as truth. The assault on free thought as both sickness and crime. The corruption of language. The brazen rewriting of history. The use of technology to make privacy impossible. The repression of sexuality. Above all, the zealous crushing of individual identity and liberty. "If you want a picture of the future," O'Brien tells Winston during his interrogation and torture, imagine a boot stamping on a human face -- for ever."

From "Big Brother" to "Thought Police" to "unperson" to "doublethink," it is no coincidence that so many of the terms Orwell coined for Nineteen Eighty-Four -- to say nothing of the word "Orwellian" itself -- have become part of our lexicon for life without freedom. Tragically, Orwell died at 46, just seven months after Nineteen Eighty-Four appeared, but 60 years later his great work survives, its power undiminished, its warning more urgent than ever.
---
‘1984’ + 60
by Jeff Jacoby
THE BOSTON GLOBE
21 June 09
(Jeff Jacoby is a columnist for The Boston Globe.)
http://www.jeffjacoby.com/5754/1984-60

"[T]he Constitution ought to be the standard of construction for the laws, and that wherever there is an evident opposition, the laws ought to give place to the Constitution. But this doctrine is not deducible from any circumstance peculiar to the plan of convention, but from the general theory of a limited Constitution."