IN CAIRO OBAMA NEVER SPOKE THE WORDS "ISLAMIST" OR "ISLAMISM", ALL HE DID WAS GIVE A SPEECH 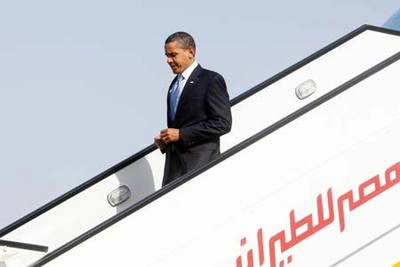 PRESIDENT OBAMA went to the Middle East,
he said,
to speak frankly and forthrightly
about the issues that bedevil America's relations with the Muslim world.
"Part of being a good friend is being honest,"
he had said in an interview just before his trip.
He warned his Cairo audience that he intended to be blunt.
"We must say openly the things we hold in our hearts
and that too often are said only behind closed doors,"
he declared;
so he was going to "speak as clearly and plainly as I can."

About some things,
the president was indeed direct.
He conveyed his impatience with those --
there are many in the Middle East --
who blame the 9/11 terrorist attacks on a Jewish or American conspiracy.
"Let us be clear: Al-Qaeda killed nearly 3,000 people on that day"
and "the victims were innocent men, women and children. . . .
These are not opinions to be debated; these are facts to be dealt with."

He was even more scornful about Holocaust denial, which is also rife in the Arab world. "Six million Jews were killed" by Nazi Germany, Obama said -- "more than the entire Jewish population of Israel today. Denying that fact is baseless, ignorant, and hateful."

Would that the rest of his remarks had been equally plain-spoken.
As the first American president with Muslim roots,
Obama benefits from much acclaim and goodwill in the Middle East.
Rarely has a president had a better opportunity to openly address the pathologies and prejudices that drag Islamic societies backward, trapping so many of the world's Muslims in cultures that are unfree and unenlightened. As a candidate for president, Obama had argued that his experience of Muslim life gave him the moral authority to speak truth to Islamic power. "I can speak forcefully," he told The New York Times, "about the need for Muslim countries to reconcile themselves to modernity in ways they have failed to do."

Alas, that is just what he didn't do. Instead Obama pandered to his audience. He repeatedly praised Islamic history and teachings, repeatedly drew attention to American or Western shortcomings -- and repeatedly avoided speaking frankly about the dysfunctions in contemporary Islam.

He spoke of democracy, for example, but only in gauzy platitudes about "the freedom to live as you choose" and the need for "government of the people and by the people." Obama could have mentioned that democracy is almost entirely absent from the Arab world, or called for the release of imprisoned dissidents. He could have used his bully pulpit to urge an end to Egypt's repressive "state of emergency," which has lasted 28 years. He could have contrasted Iraq's hard-won constitutional democracy with the Middle East's ugly autocracies and dictatorships. He could have offered hope and encouragement to persecuted reformers and pro-democracy activists. Why didn't he?

"I want to address . . . women's rights," the president said, as well he might, given the appalling subjugation of women in so many Muslim countries. But about that subjugation -- the gender apartheid in Saudi Arabia, the fanatic misogyny of the Taliban, the widespread female genital mutilation, the "honor" killings of women who get pregnant out of wedlock -- he spoke not a word. The closest he came to denouncing the thugs who blow up girls' schools and murder their teachers was to observe tepidly that "a woman who is denied an education is denied equality." He disagreed, he said, with those who think "that a woman who chooses to cover her hair is somehow less equal." But what about women who are forced to wear a hijab? About them, Obama was silent.

Most astonishing of all, Obama never spoke the words "Islamist" or "Islamism." In a speech directed to Muslims worldwide, he made no effort to refute radical Islam's endorsement of global jihad. He spoke only of "extremists" -- as in "violent extremists who pose a grave threat to our security" -- but said nothing about the totalitarian religious ideology that drives them. For Obama, speaking in the heart of the Arab world at a seat of Muslim learning, it was the perfect moment to strike an intellectual blow against radical Islam. It was the ideal venue to implore Muslims to rise up, vocally and en masse, against the jihadists who preach and commit violence in the name of Islam.

What the Brandenburg Gate was for Ronald Reagan in 1987, Cairo University could have been for Obama. Reagan seized the moment, spoke the truth, and helped liberate half a continent. All Obama did was give a speech.
---
IN CAIRO, THE PRESIDENT PANDERED