WITH WHOM SHOULD AMERICA STAND -- THE BLOODY TYRANNY OR THE PEOPLE OPPOSING IT? 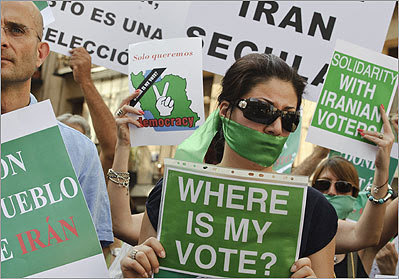 THE CHOICE PRESENTED by the democracy protests in Iran could hardly have been clearer.

On one side: a brutal theocratic regime that jails and tortures its critics at home and is a deadly sponsor of terrorism abroad; that loudly proclaims its enmity for the United States and has murdered many Americans to prove it; that barely conceals its drive to amass a nuclear arsenal; that lusts openly for the annihilation of Israel; that for 30 years has pursued a far-flung Islamist jihad.

On the other side: throngs of Iranians calling for an end to their government's abuses.

With whom should America stand -- the bloody tyranny or the people opposing it? For most Americans the question surely answers itself, which is why both houses of Congress voted all but unanimously last week to condemn the Iranian government and support the protesters' embrace of human rights, civil liberties, and the rule of law.

So why was President Obama's response initially so muted and ambivalent? Why was he more interested in preserving "dialogue" with Iran's dictatorial rulers than in providing moral support for their freedom-seeking subjects? Why did it take him until yesterday to declare that Americans are "appalled and outraged" by Iran's violent crackdown and to "strongly condemn" the vicious attacks on peaceful dissenters?

A disconcerting answer to those questions appears in the new issue of Commentary, where Johns Hopkins University scholar Joshua Muravchik isolates the most striking feature of the young Obama administration's foreign policy: "its indifference to the issues of human rights and democracy."

In an essay titled "The Abandonment of Democracy," Muravchik -- the author, most recently, of The Next Founders: Voices of Democracy in the Middle East

-- observes that every president since Jimmy Carter has made the advancement of democracy and human rights one of his foreign-policy objectives. Now, he writes, "this tradition has been ruptured by the Obama administration."

The rupture was telegraphed at a pre-inauguration meeting with the Washington Post, during which the incoming president argued that "freedom from want and freedom from fear" are more urgent than democracy, and that "oftentimes an election can just backfire" if corruption isn't fixed first. Muravchik points out that when Obama gave Al-Arabiya, an Arabic-language satellite channel, his first televised interview as president, he focused on US relations with the Middle East and Muslim world, yet "never mentioned democracy or human rights."

In February, Obama traveled to Camp Lejeune, N.C., to announce his timetable for withdrawing US troops from Iraq. His strategy, he said, was staked to the "clear and achievable goal" of "an Iraq that is sovereign, stable, and self-reliant." But other than a glancing reference to the extremely successful Iraqi election that had taken place a few weeks earlier, he again had nothing to say about democracy.

Muravchik isn't the only one to have noticed Obama's reticence on the subject. In its editorial on the Iraqi election, which it termed a "political triumph," the Washington Post celebrated Iraq's progress "toward becoming the moderate Arab democracy that the Bush administration long hoped for." Ironically, it noted, the greatest beneficiary of that election "may be President Obama, who has been a skeptic both of progress in Iraq and the value of elections in unstable states." Bush would have cheered the Iraqi vote as further evidence of the country's political and democratic advance. But Obama merely acknowledged that the election made it easier to withdraw "a substantial number" of US troops.

By April, former New York Times correspondent Joel Brinkley was explaining "How 'democracy' got to be a dirty word" in the new administration. Since taking office more than 10 weeks earlier, he wrote, "neither President Obama nor Secretary of State Hillary Rodham Clinton has even uttered the word democracy in a manner related to democracy promotion." Of the 30 releases issued by the State Department's Bureau of Democracy, Human Rights, and Labor, "not one . . . has discussed democracy promotion. Democracy, it seems, is banished from the Obama administration's public vocabulary."

Authoritarian regimes, naturally, have welcomed the new approach. According to the Associated Press, Egypt's ambassador to the United States expressed satisfaction "that ties are on the mend and that Washington has dropped conditions for better relations, including demands for 'human rights, democracy and religious and general freedoms.'" And just as Team Obama has downplayed democracy and human-rights efforts in the Middle East, it has done so as well with regard to China, Russia, and even Sudan. "Obama seems to believe that democracy is overrated, or at least overvalued," Muravchik writes.

Obama may see himself as the un-Bush, cool to democracy because his predecessor was so keen for it. But to millions of subjugated human beings, he is the leader of the free world -- an avatar of the democratic freedoms they hunger for. On the streets of Iran recently, many protesters held signs reading "Where Is My Vote?" There are limits to what the American president can do for Iran's beleaguered democrats. But is it too much to ask that he take their question seriously?

The 'democracy president' -- not

This is a fact regardless of
where he was born (Mombassa, Hawaii, Chicago, Mecca or Mars).

It is even possible that he is not a United States
citizen at all if he was born in Kenya, as three witnesses have testified. Because his mother could not pass her US citizenship on to her son because she did not live continuously in the United States for five full years after her fourteenth birthday as required by the US immigration law in effect during that period of time.

His usurpation can only be corrected (1) by Congress through his Impeachment and Removal [something which will never happen in a Congress controlled by Pelosi/Reid], or (2) it can be
corrected by his resignation, which could happen if the public presssure on him to resign becomes great enough, or (3) by his removal by the United States Supreme Court affirming a Quo Warranto decision of the United States Federal District Court for the District of Columbia [which process Attorney General Eric Holder would never allow to even begin] or (4) by an amendment to the Constitution,
which will never happen because that again would require the agreement of a Congress controlled by Pelosi/Reid.
---
- Leo Rugiens