GOD BLESS YOU, SARAH PALIN, I HOPE AND PRAY THAT YOU HAVE THE LAST LAUGH AND LEAVE YOUR ENEMIES CRYING 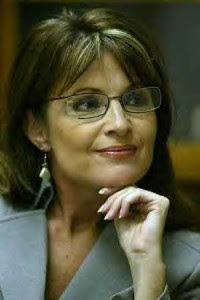 There can be no doubting that
Sarah Palin,
extraordinary woman,
extraordinary mother,
extraordinary Governor,
extraordinary political person,
was driven from office by the harpies
of the mainstream media and the left-liberal activists
who filed 150 lawsuits against her.
A harpy is a mythological creature we learned about in Greek mythology:

"Phineas, a king of Thrace, had the gift of prophecy. Zeus, angry that Phineas revealed too much, punished him by putting him on an island with a buffet of food which he could never eat. The harpies always arrived and stole the food out of his hands right before he could satisfy his hunger, and befouled the remains of his food. This continued until the arrival of Jason and the Argonauts. The Boreads, sons of Boreas, the North Wind, who also could fly, succeeded in driving off the harpies, but without killing any of them, following a request from Iris, who promised that Phineas would not be bothered by the harpies again, and "the dogs of great Zeus" returned to their "cave in Minoan Crete". Thankful for their help, Phineas told the Argonauts how to pass the Symplegades. (Argonautica, book II; Ovid XIII, 710; Virgil III, 211, 245).

"In this form they were agents of punishment who abducted people and tortured them on their way to Tartarus. They were vicious, cruel and violent. They lived on Strophades. They were usually seen as the personifications of the destructive nature of wind. The harpies in this tradition, now thought of as three sisters instead of the original two, were: Aello ("storm swift"), Celaeno ("the dark") — also known as Podarge ("fleet-foot") — and Ocypete ("the swift wing").

"Aeneas encountered harpies on the Strophades as they repeatedly made off with the feast the Trojans were setting. Celaeno cursed them, saying the Trojans will be so hungry they will eat their tables before they reach the end of their journey. The Trojans fled in fear."

Harpies in the infernal wood, from Inferno XIII, by Gustave Doré, 1861

"Harpies remained vivid in the Middle Ages. In his Inferno, XIII, Dante envisages the tortured wood infested with harpies, where the suicides have their punishment in the second ring:

"
Who drove the Trojans from the Strophades
With dire announcements of the coming woe.
They have broad wings, a human neck and face,

Clawed feet and swollen, feathered bellies; they caw
Their lamentations in the eerie trees.[1]"

They may have contributed to the campaign to drive Sarah Palin out of public office,
but the pars sanior of the American people will not let her fade into oblivion.
She will be back and she will have the last laugh.

Death by a Thousand FOIAs

have missed the real reasons for her surprising decision to resign as Alaska governor.

The national media have dismissed or downplayed her real motives,

which had little to do with any plans to run for president in 2012.

Contrary to most reports, her decision had been in the works for months, accelerating recently as it became clear that controversies and endless ethics investigations were threatening to overshadow her legislative agenda. "Attacks inside Alaska and largely invisible to the national media had paralyzed her administration," someone close to the governor told me. "She was fully aware she would be branded a 'quitter.' She did not want to disappoint her constituents, but she was no longer able to do the job she had been elected to do. Essentially, the taxpayers were paying for Sarah to go to work every day and defend herself."

This situation developed because Alaska's transparency laws allow anyone to file Freedom of Information Act requests. While normally useful, in the hands of political opponents FOIA requests can become a means to bog down a target in a bureaucratic quagmire, thanks to the need to comb through records and respond by a strict timetable. Similarly, ethics investigations are easily triggered and can drag on for months even if the initial complaint is flimsy. Since Ms. Palin returned to Alaska after the 2008 campaign, some 150 FOIA requests have been filed and her office has been targeted for investigation by everyone from the FBI to the Alaska legislature. Most have centered on Ms. Palin's use of government resources, and to date have turned up little save for a few state trips that she agreed to reimburse the state for because her children had accompanied her. In the process, though, she accumulated $500,000 in legal fees in just the last nine months, and knew the bill would grow ever larger in the future.

"The Alaska ethics elves had painted such a target on Sarah's forehead that she had begun turning down pretty much every invitation she got -- even though they were pouring in every day by the dozens," a confidant of the governor's told me. "It is not throwing in the towel. It is deciding that she was ineffective in fighting for her principles and could do more in another role."

Family considerations also played a role. Ms. Palin gave birth to a baby with Down's Syndrome in 2008, and also has a six-year old. Everyone in the family was weary of endless personal attacks, including mean-spirited suggestions on liberal blogs that all of her children should have been aborted and that she would run on a presidential platform promoting retardation.

Governor Palin tried hunkering down. She ignored offers of help from outside and kept media outlets at a distance. "Palin had become so suspicious of the media that she rejected hundreds of requests by even friendly reporters to interview her. Her press aides say that before considering interviews, she insists that they comb through reporters' work, even if they write for a friendly, conservative publication," writes Ron Kessler of NewsMax.com. I can also attest to the difficulty of reaching Governor Palin's staff and getting simple requests answered -- the problem is that such standoffishness can sometimes result in more negative coverage rather than less.

Karl Rove acknowledges the unusual battering Ms. Palin has endured in recent months, but told Fox News that GOP leaders are still puzzled by her decision. "If she wanted to escape the ethics investigations and save the taxpayers money, she's now done that," he said. Unfortunately, he added, her decision "sent a signal that if you do this kind of thing to a sitting governor like her, you can drive her out of office."

But Palin friends say such commentary misses the real point. "The Beltway media can't understand someone not consumed with presidential ambition," one told me. "Maybe Sarah Palin won't run for president and maybe her family situation made it tougher to handle the barrage of attacks that come with that territory. The real issue that should be asked is why a mean-spirited system has to treat people who run like that, instead of why someone may choose not to go through it."

All good points, and they lead me to conclude that Ms. Palin mostly likely will not run for president -- in 2012, at least. She made many mistakes after suddenly being thrust into the national spotlight last year, but hasn't merited the sneering contempt visited upon her by national reporters. She simply was not their kind of feminist -- and they disdained the politically incorrect life choices she had made.

In helping to convince Sarah Palin that her road forward in national politics would demand even more sacrifices and pain than exacted from most politicians, the media did nothing to encourage women or people of modest means to participate in politics. By sidestepping her critics, Sarah Palin is now moving to another playing field where she has more control over the rules of the game. Her friends say her critics may call her a "quitter" now, but they should wait and see what new role she decides to fill. She may wind up having the last laugh.