THE SCANDAL OF THE PELOSI-REID CONGRESS: BILLS ARE PASSED WITHOUT BEING READ BEFORE THE VOTING

SAY, DID YOU HEAR THE ONE

about the congressman who was asked to do his job?

Talk about funny -- this'll crack you up!

Well, maybe it won't. But Steny Hoyer thought it was hilarious.

Hoyer, a Maryland Democrat, is the majority leader in the US House of Representatives. At a news conference last week, he was talking about the health-care overhaul now being drafted on Capitol Hill, and a reporter asked whether he would support a pledge committing members of Congress to read the bill before voting on it, and to make the full text of the legislation available to the public online for 72 hours before the vote takes place.

The majority leader "found the idea of the pledge humorous, laughing as he responded to the question. 'I'm laughing because . . . I don't know how long this bill is going to be, but it's going to be a very long bill,' he said."

Then came one of those classic Washington gaffes that Michael Kinsley famously defined as "when a politician tells the truth." Hoyer conceded that if lawmakers had to carefully study the bill ahead of time, they'd never vote for it. "If every member pledged to not vote for it if they hadn't read it in its entirety, I think we would have very few votes," he said.

Hoyer's words can be given two interpretations, both of which are probably accurate: One is that the health-care "reform" will be such a noisome mess that anyone who really digs into its details will be more likely to oppose it. The second is that so few members of Congress will bother to read the bill that if reading it became a prerequisite for voting on it, almost no one would qualify. Either way, the majority leader was declaring it more important for Congress to pass the bill than to understand it.

"Transparency" is a popular buzzword in good-government circles, and politicians are forever promising more of it. On his first day in the White House, for example, President Obama vowed to make his administration "the most open and transparent in history." House Speaker Nancy Pelosi has boasted of the "great openness and transparency" that her leadership has brought to Congress.

But as Hoyer's mirth suggests, when it comes to the legislative process, transparency is a joke. Congress frequently votes on huge and complex bills that few if any members of the House or Senate have read through. They couldn't read them even if they wanted to, since it is not unusual for legislation to be put to a vote just hours after the text is made available to lawmakers. Congress passed the gigantic, $787 billion "stimulus" bill in February -- the largest spending bill in history -- after having had only 13 hours to master its 1,100 pages. A 300-page amendment was added to Waxman-Markey, the mammoth cap-and-trade energy bill, at 3 A.M. on the day the bill was taken up by the House. And that wasn't the worst of it, as law professor Jonathan Adler of Case Western Reserve University noted in National Review Online:

"When Waxman-Markey finally hit the floor, there was no actual bill. Not one single copy of the full legislation that would, hours later, be subject to a final vote was available to members of the House. The text made available to some members of Congress still had "placeholders" -- blank provisions to be filled in by subsequent language. . . . Even the House Clerk's office lacked a complete copy of the legislation, and was forced to place a copy of the 1,200-page draft side by side with the 300-page amendments."

Ramming legislation through Congress so quickly that neither lawmakers nor voters have time to read and digest it is a bipartisan crime; Republicans have been as guilty of it as Democrats. The 341-page Patriot Act, to mention just one notorious example, was introduced in the Republican-controlled House on Oct. 23, 2001, brought to a vote on Oct. 24, adopted by the Democratic-controlled Senate on Oct. 25, and signed into law by President George W. Bush on Oct. 26.

Such efficiency is no virtue when it comes to lawmaking, which is why every member of Congress should be pressed to sign the pledge Hoyer was asked about. It is sponsored by a grassroots conservative group, Let Freedom Ring, and is readily accessible online. Equally worthy of support is ReadTheBill.org, which is backed by a coalition of liberal organizations. Still another push comes from the libertarian group Downsize DC, which urges Congress to pass its proposed Read The Bills Act. 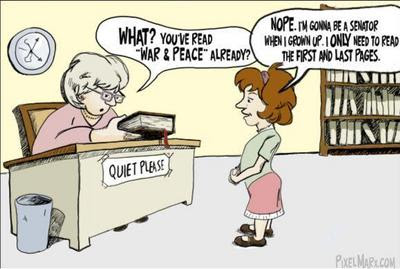 Senators and representatives who vote on bills they haven't read and don't understand betray their constituents' trust. It is no answer to say that Congress would get much less done if every member took the time to read every bill. Fewer and shorter laws more carefully thought through would be a vast improvement over today's massive bills, which are assembled in the dark and enacted in haste. Steny Hoyer chortles at the thought of asking members of Congress to do their job properly. It's up to voters to wipe the grin off his face.