WOMEN AND CHILDREN ABDUCTED IN SLAVE RAIDS ARE ROPED BY THE NECK AND MARCHED NORTH; ALONG THE WAY MANY WOMEN AND GIRLS ARE REPEATEDLY GANG-RAPED. 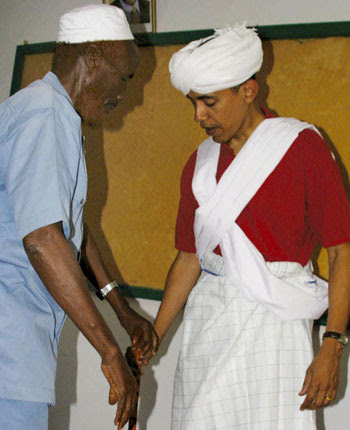 He will do there what he does here,

blather endlessly and say nothing of consequence.

If he or someone among the troupe of sycophants

who travel with him still has hope for the place,

I would advise him to consider these words written four years ago.

After decades of mismanagement and corruption,

most African states have became hollowed out.

They are no longer instruments capable of serving the public good.

Indeed, far from being able to provide aid and protection to their citizens,

African governments and the vampire-like politicians who run them

in the struggle for survival.

Whatever your thoughts about the rest of the world,

the politics and economics of Africa will leave you stupefied.

There has been no progress but regress—and the place is getting worse. The best one can say about Africa is that it is “a continent of illiterates governed by the semi-educated.” No amount of hope mongering, pretense or fantasy indulging will make it other wise.

Africa is a collection of 53 nations where every fantasy of Obama has been put into place. The result is all around. Even Obama’s narcissism and arrogance is reflected in the African political reality of “one man, one vote, one time” and “president for life.” No doubt Obama would like such a title.

A man who does indeed have the title in fact if not in law is Sudanese “president” Omar Hassan Ahmad al-Bashir, now in power 20 years.

In so many aspects he is typical of the type of creature who infects Africa and her people. It is he who is responsible for one of the world’s great genocides, that of Darfur. What can one say of the horrors there except that the horror of slavery has been added to them? It is a slavery and genocide inflicted by the Muslim north upon the animist and Christian south.

Women and children abducted in slave raids are roped by the neck or strapped to animals and then marched north. Along the way, many women and girls are repeatedly gang-raped. Children who will not be silent are shot on the spot. In the north, slaves are either kept by individual militia soldiers or sold in markets.

Such events continue there today.

But Africa offers more examples of horror than the Sudan. Consider the Congo. This was written 6 years ago, the nightmares there have not ended.

Reports of cannibalism circulated in troubled northeastern Congo, with terrified witnesses on Monday describing the mutilation and eating of the dead during more than week of bloody tribal fighting. Church leaders and residents in Bunia, the capital of the Ituri district, said Monday that Lendu tribal fighters killed civilians and combatants, cutting open their chests and ripping out hearts, livers and lungs, which they ate while they were still warm.

Such terrors were also noted by Stanley while he cut his way through the region 150 years ago.

This child lives in the Congo.

Here is a description of what his childhood and that of his fellows is like:

The war has shuttered their schools, left them lame and hungry killed their parents before their eyes. It has turned children into merciless killers and haunted them with memories of mayhem unfitting for the most hard-bitten grown-ups. Girls have been raped, toddlers have been butchered, babies left crying among dead bodies.

Any guess as to what type of society such children will make when they grow up? And such a series of nightmares have occurred in almost every African nation at one time or another. They are occurring today in Zimbabwe.

This is the Africa of reality, not the Africa of Economic Development seminars and the blathering of politicians. What is to be done—what can be done—about the place? The best and the brightest in our own nation cannot even come up with a solution to the problems of Detroit. How much less can they solve the problems of Africa?

One thing that might work for Africa—or at least it would do no more damage—is to take every politician and hang him by the neck from the nearest tree. Such a plan might also work for Detroit.

If it works there we could do the same thing in Washington DC.