CALVIN COOLIDGE BARACK HUSSEIN OBAMA IS NOT; AMERICA IS THE WORSE FOR IT


SEVENTY-FIVE YEARS AGO
this week,
Calvin Coolidge was sworn in
as the 30th president of the United States.
The anniversary has not gone unmarked. In Boston,
the John F. Kennedy Library hosted 600 historians, educators, and amateur scholars for a superb two-day conference on Coolidge's life and times.
Robert Sobel's absorbing new biography,
Coolidge: An American Enigma,
has just been published by Regnery.
And on Sunday,
the late president's sudden inauguration was reenacted at the Calvin Coolidge Historic Site in Plymouth Notch, Vt.

That summer night, back in 1923,
was one of high drama.
As President Warren G. Harding lay dying in San Francisco, Vice President Coolidge was visiting his father and stepmother in the lonely Vermont village where he had grown up. There was no electricity in the house, no plumbing, no telephone. Light was provided by a kerosene lamp.

Word of Harding's death reached White River Junction, the nearest sizable town, by telegram. By the time someone got the news to Plymouth Notch, it was extremely late. John Coolidge, the vice president's father, answered the knock at the door. In a trembling voice he called upstairs to his son.

"Coolidge and his wife returned to the bedroom," Sobel writes. "They washed, dressed, and knelt by the bed to pray. Then they went downstairs, where Coolidge dictated a message of sympathy to Mrs. Harding. The house was now crowded with reporters and others."

The attorney general urged Coolidge to take the oath of office without delay. He "went across the street to the general store and telephoned Secretary of State [Charles Evans] Hughes, who informed him the oath could be administered by a notary. Coolidge told Hughes his father was a notary. Coolidge returned home, and in the downstairs sitting room John Coolidge, using the family Bible, swore his son in as president. The time was 2:47 a.m."

The modesty of Coolidge's inauguration befit his style. He was a frugal man, with words no less than with money. Indeed, about all he is popularly remembered for is his reticence. As the story goes, the matron seated next to him at a dinner said that she had wagered she could get the famously nontalkative president to say more than two words. Coolidge replied: "You lose."

The story may have been apocryphal. But it was certainly true that Coolidge didn't believe in wasting words. In a profile written when he was still governor of Massachusetts, the New York World called him a "sphinx." He "talks little," the paper noted. "It is his silences which seem to speak loudest, for when one ventures to put a question to him, the answer comes in a tightening of the governor's lean face and the closing of his lips."

Yet he wasn't shy when he had something to say. He delivered more speeches than any of his predecessors. He held 520 press conferences. He was the first president to address the nation by radio and did so about once a month, paving the way for FDR's fireside chats.

In fact, he was a superb politician. He stands as one of the great vote-getters in Massachusetts history -- he was elected state representative, state senator, lieutenant governor, and governor -- and one of the most popular men ever to run for president. After finishing Harding's term, he was elected in his own right in a landslide in 1924. A second full term would have been his for the asking. Never, perhaps, has anyone been so admired while in the White House -- and so disdained afterward. 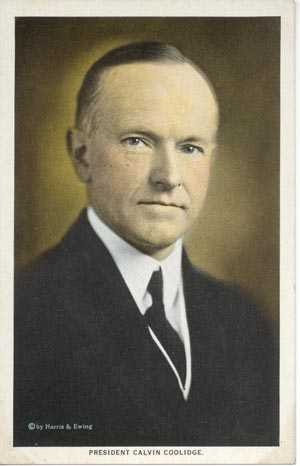 Coolidge's reputation plummeted after 1929 because the first reviews of his career were written by hostile New Deal historians. Lionizing Franklin Roosevelt for sharply expanding the role of the federal government in Americans' lives, they painted the conservative Coolidge by contrast as a do-nothing who had failed to foresee the Depression. Unable to defend himself -- he died in 1933 -- Coolidge slipped from the ranks of the nation's most esteemed figures to the level of its most disparaged.

Now, belatedly, his fine record is getting the clear look it deserves. The first hint of a Coolidge rehabilitation came in 1981, when Ronald Reagan ordered Coolidge's portrait to take the place of Harry Truman's in the Cabinet Room. At the Kennedy Library conference, Time columnist Hugh Sidey recalled the buzz that went through the press corps when the Coolidge painting appeared. Reporters thought the custodian must have fetched the wrong portrait.

But Reagan's instincts were solid. In the judgment of Robert D. Novak, the veteran political commentator, Coolidge's "personal integrity, faith in the market system, and concern for the ordinary citizen" made him "the model of American conservatism." His White House years were distinguished not only by unstained honesty but by a fierce drive to reduce taxes and slash the national debt. Coolidge was the last president until Reagan who grasped in his bones the importance of limiting government. "It is much more important," he insisted, "to kill bad bills than to pass good ones."

Quiet, modest, careful, the thoughtful New Englander raised to the presidency in that hasty ceremony 75 years ago turns out to have been one of the most honorable public servants ever to hold the job. What a pity that he has gone so long without the credit he deserves. What a blessing it would be to have his like in the White House again.
---
SEVENTY-FIVE YEARS OF UNDERESTIMATING
CALVIN COOLIDGE
by Jeff Jacoby
The Boston Globe
August 6, 1998
http://www.jeffjacoby.com/6035/75-years-of-underestimating-calvin-coolidge
(Jeff Jacoby is a columnist for The Boston Globe. To follow him on Twitter, click here.)