IF TED KENNEDY HAS ANY HONOR LEFT, WHICH I DOUBT, HE SHOULD RESIGN FROM THE SENATE SINCE HE IS NOT WELL ENOUGH TO SERVE 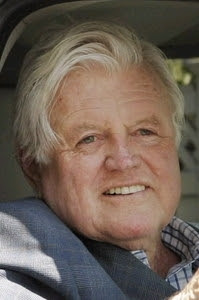 who was no stranger to suffering and sorrow.

One of those supporters was 83-year-old Frank Manning, founder of the Massachusetts Association of Older Americans. "He's not a plaster saint, he's not without his faults," Manning said in the ad. "But we wouldn't want a plaster saint."

I didn't vote for Kennedy in 1982 or any other year, and I have certainly never thought of him as a saint, plaster or otherwise. Play-to-win politics, not piety, has been the essence of his long career in the Senate. He has a gift for the poignant gesture, the moving turn of phrase; there is no denying he is a deft hand at evoking the affection of his many admirers. But beneath the tug at the heartstrings, there is always shrewd political calculation. Those 1982 TV spots, for example, had less to do with Kennedy's re-election in Massachusetts, which was never in doubt, than with the prospect of another presidential campaign and the need to improve his image in neighboring New Hampshire, where he had suffered a crushing defeat in the Democratic primary two years earlier.

Today Kennedy is gravely ill with brain cancer, but his political instincts are as sharp as ever. Given his condition, the letter he sent to Massachusetts political leaders last week could not help but generate a fresh wave of sympathy -- "I am now writing to you," it said, "about an issue that concerns me deeply -- the continuity of representation for Massachusetts, should a vacancy occur." As a human being, Kennedy is surely grateful for that sympathy. As a canny political navigator, he reckons it may provide the cover needed to change Massachusetts law so as to benefit his party.

Kennedy wants the Legislature to upend the succession law it passed in 2004, when -- at his urging -- it stripped away the governor's longstanding power to temporarily fill a Senate vacancy. Back then, John Kerry was a presidential candidate and Republican Mitt Romney was governor; Kennedy lobbied state Democrats to change the law so that Romney couldn't name Kerry's successor.

They followed his advice with gusto. When the final vote took place, the Boston Globe reported, "hooting and hollering broke out on the usually staid House floor," and House Speaker Thomas Finneran acknowledged candidly: "It's a political deal. It's very raw politics."

It still is. Now that Massachusetts has a Democratic governor, Kennedy is lobbying to restore the gubernatorial power to name an interim appointee who would serve until a new senator could be elected. That would guarantee Democrats in Washington two reliable Senate votes from Massachusetts, even if Kennedy isn't there to cast one of them.

Needless to say, Kennedy's letter says nothing about raw politics. No, it's all lofty principle and good government. "It is vital for this commonwealth to have two voices speaking for the needs of its citizens and two votes in the Senate during the approximately five months between a vacancy and an election," he writes.

Well, if Kennedy is sincere -- if his chief concern is that Massachusetts not be left for months without the services of a full-time senator -- then he should do the right thing right now: He should resign.

For well over a year, Massachusetts has not had the "two voices . . . and two votes in the Senate" that Kennedy himself says its voters are entitled to. Sickness has kept him away from Capitol Hill for most of the last 15 months. He has missed all but a handful of the 270 roll-calls taken in the Senate so far this year, including votes on the Children's Health Insurance Program, the Lily Ledbetter Fair Pay Act, the confirmation of Justice Sonia Sotomayor, and numerous appropriations and budget acts. Through no fault of his own, he is unable to carry out the job he was re-elected to in 2006. As a matter of integrity, he should bow out, and allow his constituents to choose a replacement.

"Democrats are keenly feeling the absence of Ted Kennedy," reported The Politico from Washington last week. "Senate Democratic insiders . . . say there's been little contact with the Massachusetts Democrat recently." Though his staff tries to keep up appearances, it is clear that Kennedy is no longer an active participant in Senate business. Few things are harder for those accustomed to power than letting it go. But there is no honor in clinging to office till the bitter end.

Senator Kerry told ABC News the other day that his friend and colleague "doesn't believe that under any circumstances, now or ever, Massachusetts should have anything less than full representation in the United States Senate." But it has less than full representation -- much less -- right now. For the sake of the state and Senate he loves, Edward Kennedy should step down.

KENNEDY SHOULD STEP DOWN