LIKE A GENITAL HERPES INFECTION, MERCK AND GARDASIL JUST WON'T GO AWAY - ON THE CONTRARY, THIS VIRUS CONTINUES TO INFECT OUR POLITICAL SYSTEM 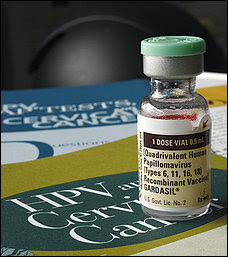 Several years ago Merck, the drug manufacturer, persuaded the Governor of Texas to mandate the vaccination of ALL sixth-grade girls in Texas Schools with Merck's new drug GARDASIL. No matter that the vaccinnations would have cost between $250-$300 per shot and there would be three shots required over a period of time. The cost to the State and to parents would have been horrific. Also, no matter that there were possible long-term negative side effects which the girls would have experienced; no one knew for sure what the long-term effects would be.

Thank God, parents rose up in arms and persuaded the State Legislature to overturn the executive order which the Governor had issued.

Now we learn that three professional medical associations have been persuaded to promote GARDASIL by receiving large grants of money from Merck.

Like an infection of genital herpes, Merck and its vaccine, GARDASIL, just won't go away and the infection of our political system just gets worse.

promoted a vaccine for a sexually transmitted virus

according to an analysis being published in Wednesday's

issue of the Journal of the American Medical Association.

The groups -- the American College Health Association, the American Society for Colposcopy and Cervical Pathology, and the Society of Gynecologic Oncologists -- promoted Gardasil, which protects against a virus that can cause cervical cancer, using virtually the same strategy that Merck employed in its marketing campaign for the vaccine, the analysis concluded.

"I think what happened here was that marketing and medical education got blurred," said Sheila M. Rothman of 's Mailman School of Public Health in , who co-authored the article with her husband, David J. Rothman, who is at the school's Center for the Study of Society and Medicine.

Critics of Merck's aggressive marketing efforts said the analysis is the latest evidence that the company is pushing the vaccine inappropriately.

"This clearly shows how Merck was able to influence opinion leaders in the medical field to promote the vaccine without presenting any of the downsides," said Diane M. Harper of the of at , who helped test the vaccine for Merck but has criticized the company's activities. "This shows how they were able to influence physicians."

Officials at Merck and the three medical groups disputed suggestions that they acted inappropriately, saying the company provided funding for education about the vaccine but did not influence the content of the groups' programs.

"We provided grants that allowed them to develop, independent of Merck, their own information that was distributed to their membership," said Richard Haupt of Merck Laboratories. "Our activities with these societies were done in an appropriate and independent manner." Merck acknowledged that the company provided $199,000 to the American College Health Association, $300,000 to the American Society for Colposcopy and Cervical Pathology and $250,000 to the Society of Gynecologic Oncologists.

Gardasil protects against the human papillomavirus, which causes genital warts and can lead to cervical cancer. Although hailed by many health experts, the vaccine has been highly controversial since winning Food and Drug Administration approval in 2006.

Social conservatives have worried that providing the vaccine to young girls encourages sexual activity. The company also came under heavy criticism for an aggressive campaign to make the vaccine a mandatory prerequisite of school attendance -- an effort the company later abandoned.

Other critics have raised questions about the vaccine's long-term effectiveness and cost-effectiveness and about whether it may be causing serious side effects. Merck, the FDA and the federal Centers for Disease Control and Prevention have repeatedly said there is no evidence that the vaccine is unsafe.

In another paper published in the medical journal, the CDC analyzed more than 12,000 reports of adverse events among recipients of the vaccine -- given in a three-shot course -- and concluded that there is no evidence that any of the serious side effects were caused by the vaccine. Although more women who received the vaccine experienced blood clots, other factors such as the use of birth-control pills may be to blame, the researchers said.

Harper said the analysis could not rule out uncommon risks from the vaccine, but Haupt praised the findings as confirmation of the vaccine's safety.

The Rothmans, meanwhile, charged that the three medical societies relied on company funding to promote the vaccine among their members using arguments that mimicked Merck's approach, which they said deemphasized the downsides of the vaccine and oversimplified the risk of cervical cancer.

The American Society of Colposcopy and Cervical Pathology's program encouraged doctors to help persuade "states and federal agencies to pay for the vaccine" and to impose "mandates for use" of the vaccine, the pair wrote.

The Society of Gynecologic Oncologists' "teaching materials omitted cautionary qualifications" about the vaccine, they said. And the American College Health Association's efforts included sponsoring a Webcast viewed by 350 members and sending e-mails to college and university students urging them to get vaccinated.

"They seem to be repeating the marketing message of Merck," Sheila Rothman said. "If the societies are just repeating the drug company's message, they are not really educating. They are blurring the line between educating and marketing."

But spokespeople from the three groups said that they disclosed the funding source for their activities and that their efforts underwent independent scientific review.

"I consider the HPV vaccine the greatest prevention tool in women's health since the invention of the Pap smear," said James Turner, president of the American College Health Association. "We're just trying to prevent a disease that occurs in thousands of college students every year."

He is not eligible to be
President of the
because he is not a Natural Born Citizen
as required by Article Two, Section One, Clause Five of the United States Constitution.

He is not eligible
because he was not born of
TWO PARENTS
BOTH OF WHOM WERE UNITED STATES CITIZENS
at the time of his birth as required by the Constitution.
His father was a subject/ciitizen
of Kenya/Great Britain at the time of his birth and afterwards, AND further, as Obama himself admitted on his website during the 2008 campaign, Obama was therefore born SUBJECT TO THE GOVERNANCE OF GREAT BRITAIN.

‘When Barack Obama Jr. was born on Aug. 4,1961, in , was a British colony, still part of the ’s dwindling empire. As a Kenyan native, Barack Obama Sr. was a British subject whose citizenship status was governed by The British Nationality Act of 1948. That same act governed the status of Obama Sr.‘s children…’ “

The FACT that he was not born of TWO CITIZEN PARENTS is all that matters. The question of his birth certificate is a distraction (a distraction fostered by Obama’s supporters?) that ought not to occupy our time and resources.

Also, it is possible that he is not a
citizen at all through his mother if he was born in , as three witnesses have testified. The reason is because his mother could not pass her US citizenship on to her son because she did not live continuously in the United States for five full years after her fourteenth birthday as required by the US immigration law in effect during that period of time.