IF YOU THOUGHT THE NINTH CIRCUIT COURT OF APPEALS WAS BAD, WAIT UNTIL LIU GETS ON IT 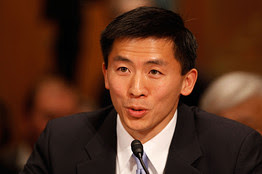 Goodwin Liu testifies before the Senate Judiciary Committee during his confirmation hearing to be U.S. Circuit Judge for the Ninth Circuit.

For a preview of the pitfalls facing President Obama if he nominates a liberal to succeed retiring Supreme Court Justice John Paul Stevens, yesterday's hearing for Goodwin Liu is instructive. As a nominee to the Ninth Circuit Court of Appeals, the 39-year-old Berkeley law school professor is a prototype for those who believe the Constitution should be read to reflect what he has called the "evolving norms and social understandings of our country."

If Mr. Liu's judicial philosophy wouldn't be familiar to the Framers, it is de rigueur in the elite colleges and law schools from which he hails. Speaking of the nomination of now Chief Justice John Roberts, Mr. Liu opined that words like "'free enterprise,' 'private ownership of property,' and 'limited government'" are "code words for an ideological agenda hostile to environmental, workplace, and consumer protections."

On the nomination of now-Justice Samuel Alito, Professor Liu was even nastier. In a statement reminiscent of Ted Kennedy's slur against Robert Bork, Mr. Liu wrote that "Judge Alito's record envisions an America where police may shoot and kill an unarmed boy to stop him from running away with a stolen purse; where federal agents may point guns at ordinary citizens during a raid, even after no sign of resistance . . . where a black man may be sentenced to death by an all-white jury for killing a white man . . . and where police may search what a warrant permits, and then some."

Such statements included "unnecessarily flowery" and "colorful language," Mr. Liu said at yesterday's hearing, but they shouldn't trouble voters because they are irrelevant to being a judge. While professors are paid to be "provocative" and to probe and invent, he said, judges are supposed to be neutral arbiters. "Whatever I've written in books and articles would have no bearing on my role as a judge," he told the Senate Judiciary Committee. So those polemics were merely for political show and tell?

Mr. Obama once suggested that he would seek judicial nominees who used empathy in judging the cases that came before their courts, a sentiment Mr. Liu echoed yesterday. "Law affects people's lives. It's not just a bunch of words on paper" or cases in a book, he said. And while a judge should not be biased, he should decide cases based on an "appreciation of what's at stake in a particular case."

Of course that's right, but the real test of a judge is to decide cases based on the law, not on political ideology or human sympathies. Professor Liu sounds like a man with a political legal agenda.

Mr. Liu has never served as a lower court judge and has limited experience arguing cases before the federal courts. While his background outside the judicial monastery should not be disqualifying, the Senate must consider the academic work that forms the basis of his legal expertise. When Justice Alito was nominated to the Supreme Court, the Berkeley professor said that intellect "is a necessary but not sufficient credential" for a seat on the bench. The same applies to Mr. Liu.