BRING BACK FLOGGING? NOT A CHANCE!

ABOUT 15 YEARS AGO, I wrote a column -- "Bring back flogging" -- that called for reviving corporal punishment for convicted criminals. Rather than continuing to lock up millions of offenders, many of them 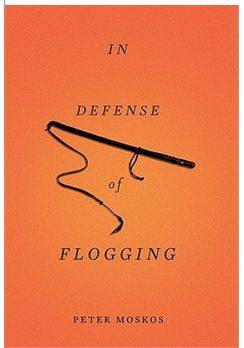 nonviolent, in crowded and brutal prisons, I suggested, it would be more humane to punish at least some of them with a straightforward whipping and let them get on with their lives. Americans have been taught to think of flogging as hopelessly barbaric and primitive. But is corporal punishment really less civilized than a criminal-justice system that relies almost exclusively on caging human beings?

It was a pretty good column, and I always had a hunch it would make an even better book. Now it has, and I only wish I had written it.

Peter Moskos, a criminologist at the City University of New York and a former Baltimore police officer, has just published In Defense of Flogging, a serious if startling proposal to drastically shrink America's "massive and horrible system of incarceration" by letting most convicted criminals choose between going to prison and a semipublic flogging with a rattan cane. An absurd thesis? Don't reject it out of hand, Moskos says, before considering what you would want for yourself. "Given the choice between five years in prison and 10 brutal lashes, which would you choose?" A flogging would be intensely painful and bloody, but it would be over in a few minutes. Prison would mean losing years of your life, being locked away from everything and everyone you care about.

Offered those alternatives -- hard time or the lash -- most people would choose the lash. Better the short, sharp humiliation of a flogging than the prolonged emotional torture of being shut in a cage. Better to be punished and be done with it.

Its title notwithstanding, In Defense of Flogging is less a brief for the resumption of corporal punishment than an indictment of America's appalling system of mass imprisonment.

The United States locks up people at a rate unmatched anywhere on Earth. There are 2.3 million people behind bars in this country -- more than the populations of Boston, Baltimore, and San Francisco combined. Both in raw numbers and as a percentage of the whole, the United States has more prisoners than any other country. With an incarceration rate of 756 inmates per 100,000 residents, America outjails not only every advanced democracy -- in Canada and Western Europe, the rate of imprisonment is about one-seventh what it is here -- but even the world's dictatorships and autocracies. In Russia, the incarceration rate is 629 per 100,000. In Cuba, it's 530. In Iran, it's 220.

Are Americans safer because so many of their fellow citizens are behind bars? That's far from clear. "From 1970 to 1991 crime rose while we locked up a million more people," Moskos writes. "Since then we've locked up another million and crime has gone down." Was it only the second million who were the "real" criminals? 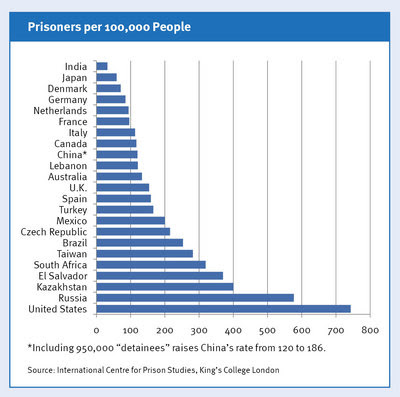 Prisons are good at keeping violent predators off the streets, but relatively few people are imprisoned because we fear what they might do if we release them. Most inmates are locked up because locking people up is the way we punish virtually every offense -- from committing murder to laundering money to selling marijuana. Prisons were originally conceived as a means of curing criminals and bringing them to penance. What they have turned into is a vast American gulag of pervasive brutality and brain-numbing boredom, replete with psychological damage, pervasive drug use, gang intimidation, and an estimated 200,000 rapes a year.

For dangerous felons there may be no alternative to incarceration. But for millions of nonviolent common criminals, low-level drug offenders, and white-collar swindlers, Moskos writes, "the punishment of prison is far, far worse than the crime they have committed." Why not offer them instead the option of corporal punishment, under a doctor's supervision, and followed by immediate release? Considering all the costs and cruelties imposed by America's gigantic penal system -- imposed not only on the individuals we lock up, but on their families, on the taxpayers, on minority communities -- wouldn't flogging be a more humane and reasonable alternative?

Granted, flogging criminals would be ugly. But it would also make their punishment immediate and transparent. And it wouldn't be nearly as destructive and dysfunctional as keeping 2.3 million people in cages. America's penal system is a national disgrace. In Defense of Flogging suggests one way to make it better.

As much as Jeff Jacoby's proposal seems to make sense, I see little hope that it would ever

Because the United States Supreme Court would rule flogging to be unconstitutional cruel and unusual punishment in a lawsuit sure to be brought by the ACLU.