Close the door on public-sector unions

MASSACHUSETTS GOVERNMENT is almost a wholly-owned subsidiary of the Democratic Party, so there was no chance that a law limiting collective bargaining for municipal employees would resemble the recent laws passed in Wisconsin and Ohio. The measure approved this week by Governor Deval Patrick and the state Legislature will hold down the cost of providing health benefits to teachers, firefighters, and other local workers by modestly curbing their unions' right to veto changes to employee health plans. For the ultrablue Bay State, that was a notable accomplishment. But it was hardly the "Union Busting, Massachusetts Style," that a Wall Street Journal headline hopefully predicted back in April.

The new laws in Wisconsin and Ohio prohibit collective bargaining over public-sector pensions and health benefits, and allow government employees to opt out of paying any union dues or fees. The Wisconsin law requires annual re-certification of all public employee unions; in Ohio, negotiated wage increases will have to be approved by voters if they would result in higher taxes. Nothing that sweeping was ever on the table in Massachusetts. Government unions may no longer have quite as much clout on Beacon Hill as they used to, but they still have enough to make Democrats think twice about confronting them.

No surprise, then, that the collective bargaining changes ultimately adopted were watered down significantly from the version approved by the state House of Representatives in April. That House vote reflected public sentiment -- a majority of Massachusetts voters believe government unions have too much power -- but in the face of union outrage, policymakers quickly promised to protect the unions' "seat at the table" and "meaningful voice" in setting health benefits for government employees. In April, the head of the Massachusetts AFL-CIO vowed to "fight this thing to the bitter end." This week, he happily acknowledged that the final language preserved "all we ever wanted, [which] was to have a voice."

That's too bad. Ensuring a "voice" for organized labor in government policymaking may sound reasonable, especially when those policies affect government workers. But collective bargaining in the public sector is in reality not reasonable at all. It is emphatically not like bargaining in the private sector, where unions representing labor contend with management representing owners for a share of the profits that labor helps create. 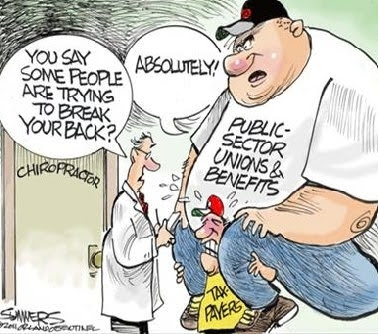 In the public sector, there are no profits to share. There are only taxpayers' dollars, which neither government employees nor government managers create. As for the taxpayers who do create those dollars, they have no seat at the table when public unions negotiate over wages and benefits. Instead, government sits on both sides, negotiating with itself over how to spend the people's money.

So unlike their counterparts in the private sector, public-sector unions are rarely constrained by market forces. There are limits to the wages and benefits that labor can demand from private employers. Corporations have to make a profit to stay alive, and both sides know that if costs rise too high, the results may be lost sales, eliminated jobs, or -- if worse comes to worst -- bankruptcy. Consequently, union negotiators cannot insist on the moon, and corporate managers dare not lose sight of the company's bottom line.

But that check and balance doesn't exist in public-sector collective bargaining. Teachers' or firefighters' or library workers' unions don't have to worry about jeopardizing the government's profits or driving away its customers: Government agencies can't go bankrupt, and their "customers" can't switch to a cheaper brand. So why not insist on the moon? Especially when the government managers on the other side of the table generally have little incentive to keep costs down. After all, if the pay, perks, and pensions of public workers send budgets through the roof, what choice do taxpayers have but to foot the bill?

At bottom, collective bargaining in the public sector is profoundly antidemocratic: It denies voters final say over the public policies they must live under, by forcing their elected representatives to shape those policies in concert with unions. In effect, it transfers to union officials -- interested parties not chosen by the people -- decision-making authority that they have no legitimate right to. That is why until just a few decades ago, it was universally understood that collective bargaining was incompatible with government employment.

Gradually it is becoming clear that throwing the door open to public-sector unions was a serious and costly mistake. It will take years to undo that mistake, but the process has begun. Even, if ever so slowly, in Massachusetts.