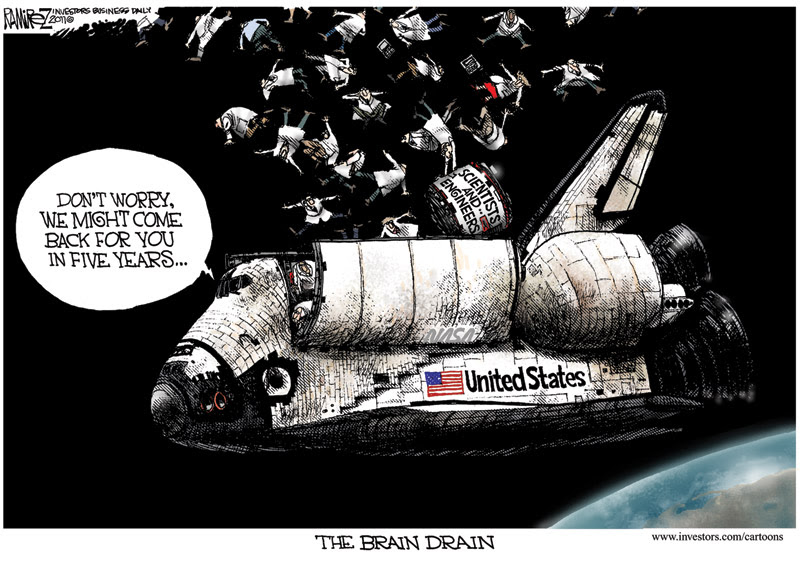 A MAN WITHOUT A PLAN

Earlier this month, Moody's downgraded Irish government debt to junk. Which left the Irish somewhat peeved. The Department of Finance pointed out that it had met all the "quantitative fiscal targets" imposed by the European Union, and the National Treasury Management Agency said that Ireland was sufficiently flush "to cover all its financing requirements until the end of 2013."

Which is more than the government of the United States can say.

That's not the only difference between the auld sod and America. In Europe, austerity is in the air, and in the headlines: "Italy Fast-Tracks Austerity Vote." "Greek Minister Urges Austerity Consensus." "Portugal To Speed Austerity Measures." "Even Queen Faces Funding Squeeze In Austerity Britain." The word has become so instantly ubiquitous that Leftie deadbeats are already opposed to it: "Austerity Protest Takes Place In Dublin." For the rentamob types, "austerity" is to this decade what "Bush" and "Iraq War" were to the last. It can't be long before grizzled old rockers are organizing some all-star Rock Against Austerity gala.

By contrast, nobody seems minded to "speed austerity measures" over here. The word isn't part of the conversation – even though we're broke on a scale way beyond what Ireland or Portugal could ever dream of. The entire Western world is operating on an unsustainable business model: If it were Borders or Blockbuster, it would be hoping to close the Greek and Portuguese branches but maybe hold on to the Norwegian one. In hard reality, like Borders only the other day, it would probably wind up shuttering them all. The problem is structural: Not enough people do not enough work for not enough of their lives. Developed nations have 30-year-old students and 50-year old retirees, and then wonder why the shrunken rump of a "working" population in between can't make the math add up.

By the way, demographically speaking, these categories – "adolescents" and "retirees" – are an invention of our own time: They didn't exist a century ago. You were a kid till 13 or so. Then you worked. Then you died. As Obama made plain in his threat to Gran'ma last week that the August checks might not go out, funding nonproductivity is now the principal purpose of the modern state. Good luck with that at a time when every appliance in your home is manufactured in Asia.

As I said, these are structural problems. In theory, they can be fixed. But, when you look at the nature of them, you've got to wonder whether they ever will be this side of societal collapse. Blockbuster went bankrupt because it was wedded to a 1980s technology and distribution system. In government, being merely a quarter-century obsolete would be a major achievement. The ruling party in Washington is wedded to the principle that an 80-year-old social program is inviolable: That's like Blockbuster insisting in 2011 that there's no problem with its business model for rentals of silent movies with live orchestral accompaniment. To be sure, there are some problems parking the musicians' bus in residential streets, but nothing that can't be worked out.

But "political reality" operates to different rules from humdrum real reality. Thus, the "debt ceiling" debate is regarded by most Democrats and a fair few Republicans as some sort of ghastly social faux pas by boorish conservatives: Why, everyone knows ye olde debt-limit vote is merely a bit of traditional ceremonial, like the Lord Chancellor walking backwards with the Cap of Maintenance and Black Rod shouting "Hats off, strangers!" at Britain's Opening of Parliament. You hit the debt ceiling, you jack it up a couple trillion, and life goes on – or so it did until these GOP yahoos came along and decided to treat the vote as if it actually meant something.

Obama has done his best to pretend to take them seriously. He claimed to have a $4 trillion deficit-reduction plan. The court eunuchs of the press corps were impressed, and went off to file pieces hailing the president as "the grown-up in the room." There is, in fact, no plan. No plan at all. No plan whatsoever, either for a deficit reduction of $4 trillion or $4.73. As is the way in Washington, merely announcing that he had a plan absolved him of the need to have one. So the president's staff got out the extra-wide teleprompter and wrote a really large number on it, and simply by reading out the really large number the president was deemed to have produced a serious blueprint for trillions of dollars in savings. For his next trick, he'll walk out on to the stage of Carnegie Hall, announce that he's going to play Haydn's Cello Concerto No 2, and, even though there's no cello in sight, and Obama immediately climbs back in his golf cart to head for the links, music critics will hail it as one of the most moving performances they've ever heard.

He has a plan without detai

The only "plan" Barack Obama has put on paper is his February budget. Were there trillions and trillions of savings in that? Er, no. It increased spending and doubled the federal debt.

How about Harry Reid, the Senate Majority Leader? Has he got a plan? No. The Democratic Senate has shown no interest in producing a budget for two-and-a-half years. Unlike the president, Sen. Reid can't even be bothered pretending he's interested in spending reductions. But he is interested in spending, and, if that's your bag, boring things like budgets only get in the way.

Senate Majority Leader Harry Reid, D-Nev., is shown in an elevator with his security detail after returning from a meeting at the White House on Capitol Hill in Washington on Wednesday, July 20, 2011.

It seems reasonable to conclude from the planlessness and budgetlessness of the Obama/Reid Democrats that their only plan is to carry on spending without limit. Otherwise, someone somewhere would surely have written something down on a piece of paper by now. But no, apparently the Department of Writing Down Plans is the only federal expense the president is willing to cut. You begin to see why the Europeans are a little miffed. They're passing austerity budgets so austere they've spawned an instant anti-austerity movement rioting in the street – and yet they're still getting downgraded by the ratings agencies. In Washington, by contrast, the ruling party of the Brokest Nation in History has no spending plan other than to plan to spend even more – and nobody's downgrading them.

In the debt-ridden treasuries of Europe, they're talking "austerity." In the debt-ridden treasury of Washington, they're talking about more spending (Kathleen Sebelius is touting new women's health programs to be made available "without cost.") At the risk (in Samuel Johnson's words) of settling the precedence between a louse and a flea, I think Europe's political discourse is marginally less deranged than ours. The president is said to be "the adult in the room" because he is reported to be in favor of raising the age of Medicare eligibility from 65 to 67.

If that's the best offer, there isn't going to be a 2036, not for America. As the Europeans are beginning to grasp, eventually "political reality" collides with real reality. The message from a delusional Washington these last weeks is that it won't be a gentle bump.