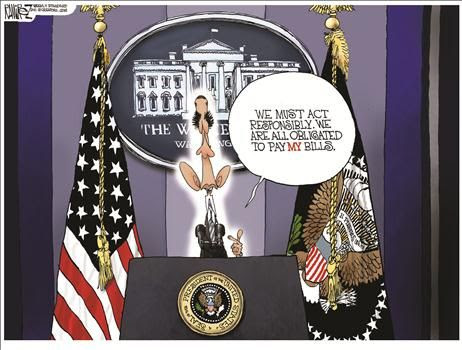 President Obama is demanding a big long-term budget deal. He won’t sign anything less, he warns, asking, “If not now, when?”

How about last December, when he ignored his own debt commission’s recommendations? How about February, when he presented a budget that increases debt by $10 trillion over the next decade? How about April, when he sought a debt-ceiling increase with zero debt reduction attached?

All of a sudden he’s a born-again budget balancer prepared to bravely take on his own party by making deep cuts in entitlements. Really? Name one. He’s been saying forever that he’s prepared to discuss, engage, converse about entitlement cuts. But never once has he publicly proposed a single structural change to any entitlement.

Hasn’t the White House leaked that he’s prepared to raise the Medicare age or change the cost-of-living calculation?

Anonymous talk is cheap. Leaks are designed to manipulate. Offers are floated and disappear.

Say it, Mr. President. Give us one single structural change in entitlements. In public.

As part of the pose as the forward- looking grown-up rising above all the others who play politics, Obama insists upon a long-term deal. And what is Obama’s definition of long-term? Surprise: An agreement that gets him past Nov. 6, 2012.

Nothing could be more political. It’s like his Afghan surge wind-down date. September 2012 has no relation to any military reality on the ground. It is designed solely to position Obama favorably going into the last weeks of his reelection campaign.

Yet the Olympian above-the-fray no-politics-here pose is succeeding. A pliant press swallows the White House story line: the great compromiser (“clearly exasperated,” sympathized a Post news story) being stymied by Republican “intransigence” (the noun actually used in another front-page Post news story to describe the Republican position on taxes).

The meme having been established, Republicans have been neatly set up to take the fall if a deal is not reached by Aug. 2. Obama is already waving the red flag, warning ominously that Social Security, disabled veterans’ benefits, “critical” medical research, food inspection — without which agriculture shuts down — are in jeopardy.

The Republicans are being totally outmaneuvered. The House speaker appears disoriented. It’s time to act. Time to call Obama’s bluff.

A long-term deal or nothing? The Republican House should immediately pass a short-term debt-ceiling hike of $500 billion containing $500 billion in budget cuts. That would give us about five months to work on something larger.

The fat-cat tax breaks (those corporate jets) that Obama’s talking points endlessly recycle? Republicans should call for urgent negotiations on tax reform along the lines of the Simpson-Bowles commission that, in one option, strips out annually $1.1 trillion of deductions, credits and loopholes while lowering tax rates across the board to a top rate of 23 percent. The president says he wants tax reform, doesn’t he? Well, Mr. President, here are five months to do so.

Will the Democratic Senate or the Democratic president refuse this offer and allow the country to default — with all the cataclysmic consequences that the Democrats have been warning about for months — because Obama insists on a deal that is 10 months and seven days longer?

That’s indefensible and transparently self-serving. Dare the president to make that case. Dare him to veto — or the Democratic Senate to block — a short-term debt-limit increase.
This is certainly better than the McConnell plan, which would simply throw debt reduction back to the president. But if the House cannot do Plan A, McConnell is the fallback Plan B.

After all, by what crazy calculation should Republicans allow themselves to be blamed for a debt crisis that could destabilize the economy and even precipitate a double-dip recession? Right now, Obama owns the economy and its 9.2 percent unemployment, 1.9 percent GDP growth and exploding debt about which he’s done nothing. Why bail him out by sharing ownership?

You cannot govern this country from one house. Republicans should have learned that from the 1995-96 Gingrich-Clinton fight when the GOP controlled both houses and still lost.

If conservatives really want to get the nation’s spending under control, the only way is to win the presidency. Put the question to the country and let the people decide. To seriously jeopardize the election now in pursuit of a long-term, small-government, Ryan-like reform that is inherently unreachable without control of the White House may be good for the soul. But it could very well wreck the cause.
Posted by Leo Rugiens at 5:28 PM