THE PROBLEM WITH OBAMA'S ECONOMIC POLICY IS THAT EVENTUALLY HE WILL RUN OUT OF OTHER PEOPLES' MONEY, IF HE HASN'T ALREADY 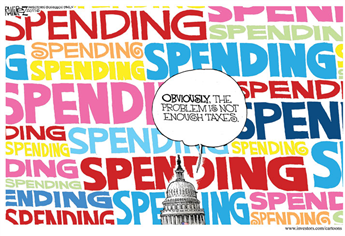 The other day, Abdul Qadir Fitrat, the governor of Afghanistan’s central bank, fled the country. The only wonder is that there aren’t more fleeing. Not Afghans; central bankers. I mean, you gotta figure that throughout the G-20 there are more than a few with the vague but growing feeling that the jig’s up big time.

Round about the time the Afghan central banker was heading for the hills, the Greek central banker ventured some rare criticisms of his government. “Piling more taxes on taxpayers has reached its limit,” said Giorgos Provopoulos. The alleged austerity measures do not “place enough emphasis on the containment of spending.”

All very sensible. Prudent and measured. Outside, in the streets of Athens, strikers struck, rioters rioted, and an already shrunken tourism industry dwindled down to an international press corps anxious to get on with societal collapse. “We don’t want your money, Europe,” declared a protesting “youth,” Iamando, 36. “Leave us alone — please, please, please.”

I would bet that, somewhere not too deep down, Giorgos Provopoulos understands that the problem is not the Greek economy or the Greek government but the Greek people. Many years ago in this space, I quoted the line Gerald Ford liked to use when trying to ingratiate himself with conservative audiences: “A government big enough to give you everything you want is big enough to take away everything you have.” And I suggested there was an intermediate stage: A government big enough to give you everything you want isn’t big enough to get you to give any of it back. That’s the stage Greece is at and so, to one degree or another, is the rest of the Western world. In the United States, our democracy is trending as Athenian as the rest: We’re the Brokest Nation in History, but, as those Medicare polls suggest, getting enough people to give enough of it back isn’t going to be any easier than it is in Greece. From Athens to Madison, Wis., too many people have gotten used to a level of comfort and ease they haven’t earned.

It’s not a green-eyeshade issue. The inability to balance the books is a symptom of more profound structural imbalances. Over on the Mediterranean, the only question that matters is: Are the Greek people ready to get real? Most of us, including Mr. Provopoulos, have figured out the answer to that.

Since Obama took office, it’s been fashionable to quote Mrs. Thatcher’s great line: “The problem with socialism is that eventually you run out of other people’s money.” But we’re way beyond that. That’s a droll quip when you’re on mid-20th-century European fertility rates, but we’ve advanced to the next stage: We’ve run out of other people, period. Hyper-rationalist technocrats introduced at remarkable speed a range of transformative innovations — welfare, feminism, mass college education, abortion — whose cumulative effect a few decades on is that the developed world has developed to breaking point: Not enough people do not enough work for not enough of their lives. In the course of so doing, they have fewer children later. And the few they do have leave childhood ever later — Obamacare’s much heralded “right” for a 26-year old to remain on his parents’ health insurance being merely a belated attempt to catch up with the Europeans, and one sure to be bid up further.

A society of 25-year-old “children” whiling away the years till early middle age in desultory pseudo-education has no desire to fund its prolonged adolescence by any kind of physical labor, so huge numbers of unskilled Third World immigrants from the swollen favelas of Latin America or (in Europe) the shanty megalopolises of the Muslim world are imported to cook, clean, wash, build, do. On the Continent, the shifting rationale for mass immigration may not illuminate much about the immigrants but it certainly tells you something about the natives: Originally, European leaders said, we needed immigrants to work in the mills and factories. But the mills and factories closed. So the new rationale was that we needed young immigrants to keep the welfare state solvent. But in Germany the Turks retire even younger than the Krauts do, and in France 65 percent of imams are on the dole. So the surviving rationale is that a dependence on mass immigration is not a structural flaw but a sign of moral virtue. The evolving justification for post-war immigration policy — from manufacturing to welfare to moral narcissism — is itself a perfect shorthand for Western decay.

Most of the above doesn’t sound terribly “fiscal,” because it’s not. The ruinous debt is a symptom of our decline, not the cause. As Angela Merkel well understands every time she switches on the TV and sees a news report from Greece, culture trumps economics. I had a faintly surreal conversation with two Hollywood liberal pals not so long ago: One moment they were bemoaning all those right-wing racists like Pat Buchanan who’d made such a big deal about the crowd cheering for the Mexican team and booing the Americans at a U.S.–Mexico soccer match in Pasadena, and deploring the way the U.S. goalie had complained that the post-match ceremony was conducted entirely in Spanish. Ten minutes later they were sighing that nothing in Los Angeles seemed to work quite as well as it did when they first came out west over 40 years ago.

And it never occurred to them that these two conversational topics might somehow be connected.

Meanwhile, at Redwood Heights Elementary in Oakland, Californian kindergartners are put through “Gender Spectrum Diversity Training” in order to teach them that there are “more than two genders.”

The social capital of a nation is built up over centuries but squandered in a generation or two. With blithe self-confidence, the post-war West changed too much too fast. We changed everything, and yet we’ll still wonder why everything’s changed.