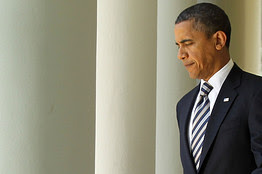 
WHAT HAPPENED TO OBAMA? ABSOLUTELY NOTHING
He is still the same anti-American leftist he was before becoming our president.

It's open season on President Obama.

Which is to say that the usual suspects on the right (among whom I include myself) are increasingly being joined in attacking him by erstwhile worshipers on the left. Even before the S&P downgrade, there were reports of Democrats lamenting that Hillary Clinton had lost to him in 2008. Some were comparing him not, as most of them originally had, to Lincoln and Roosevelt but to the hapless Jimmy Carter. There was even talk of finding a candidate to stage a primary run against him. But since the downgrade, more and more liberal pundits have been deserting what they clearly fear is a sinking ship.

Here, for example, from the Washington Post, is Richard Cohen: "He is the very personification of cognitive dissonance—the gap between what we (especially liberals) expected of the first serious African American presidential candidate and the man he in fact is." More amazingly yet Mr. Cohen goes on to say of Mr. Obama, who not long ago was almost universally hailed as the greatest orator since Pericles, that he lacks even "the rhetorical qualities of the old-time black politicians." And to compound the amazement, Mr. Cohen tells us that he cannot even "recall a soaring passage from a speech."


Overseas it is the same refrain. Everywhere in the world, we read in Germany's Der Spiegel, not only are the hopes ignited by Mr. Obama being dashed, but his "weakness is a problem for the entire global economy."

In short, the spell that Mr. Obama once cast—a spell so powerful that instead of ridiculing him when he boasted that he would cause "the oceans to stop rising and the planet to heal," all of liberaldom fell into a delirious swoon—has now been broken by its traumatic realization that he is neither the "god" Newsweek in all seriousness declared him to be nor even a messianic deliverer.

Hence the question on every lip is—as the title of a much quoted article in the New York Times by Drew Westen of Emory University puts it— "What Happened to Obama?" Attacking from the left, Mr. Westin charges that President Obama has been conciliatory when he should have been aggressively pounding away at all the evildoers on the right.

Of course, unlike Mr. Westen, we villainous conservatives do not see Mr. Obama as conciliatory or as "a president who either does not know what he believes or is willing to take whatever position he thinks will lead to his re-election." On the contrary, we see him as a president who knows all too well what he believes. Furthermore, what Mr. Westen regards as an opportunistic appeal to the center we interpret as a tactic calculated to obfuscate his unshakable strategic objective, which is to turn this country into a European-style social democracy while diminishing the leading role it has played in the world since the end of World War II. The Democrats have persistently denied that these are Mr. Obama's goals, but they have only been able to do so by ignoring or dismissing what Mr. Obama himself, in a rare moment of candor, promised at the tail end of his run for the presidency: "We are five days away from fundamentally transforming the United States of America."


This statement, coming on top of his association with radicals like Bill Ayers, Jeremiah Wright and Rashid Khalidi, definitively revealed to all who were not wilfully blinding themselves that Mr. Obama was a genuine product of the political culture that had its birth among a marginal group of leftists in the early 1960s and that by the end of the decade had spread metastatically to the universities, the mainstream media, the mainline churches, and the entertainment industry. Like their communist ancestors of the 1930s, the leftist radicals of the '60s were convinced that the United States was so rotten that only a revolution could save it.

But whereas the communists had in their delusional vision of the Soviet Union a model of the kind of society that would replace the one they were bent on destroying, the new leftists only knew what they were against: America, or Amerika as they spelled it to suggest its kinship to Nazi Germany. Thanks, however, to the unmasking of the Soviet Union as a totalitarian nightmare, they did not know what they were for. Yet once they had pulled off the incredible feat of taking over the Democratic Party behind the presidential candidacy of George McGovern in 1972, they dropped the vain hope of a revolution, and in the social-democratic system most fully developed in Sweden they found an alternative to American capitalism that had a realistic possibility of being achieved through gradual political reform.

Despite Mr. McGovern's defeat by Richard Nixon in a landslide, the leftists remained a powerful force within the Democratic Party, but for the next three decades the electoral exigencies within which they had chosen to operate prevented them from getting their own man nominated. Thus, not one of the six Democratic presidential candidates who followed Mr. McGovern came out of the party's left wing, and when Jimmy Carter and Bill Clinton (the only two of the six who won) tried each in his own way to govern in its spirit, their policies were rejected by the American immune system. It was only with the advent of Barack Obama that the leftists at long last succeeded in nominating one of their own.

To be sure, no white candidate who had close associations with an outspoken hater of America like Jeremiah Wright and an unrepentant terrorist like Bill Ayers would have lasted a single day. But because Mr. Obama was black, and therefore entitled in the eyes of liberaldom to have hung out with protesters against various American injustices, even if they were a bit extreme, he was given a pass. And in any case, what did such ancient history matter when he was also articulate and elegant and (as he himself had said) "non-threatening," all of which gave him a fighting chance to become the first black president and thereby to lay the curse of racism to rest?

And so it came about that a faithful scion of the political culture of the '60s left is now sitting in the White House and doing everything in his power to effect the fundamental transformation of America to which that culture was dedicated and to which he has pledged his own personal allegiance.

I disagree with those of my fellow conservatives who maintain that Mr. Obama is indifferent to "the best interests of the United States" (Thomas Sowell) and is "purposely" out to harm America (Rush Limbaugh). In my opinion, he imagines that he is helping America to repent of its many sins and to become a different and better country.

But I emphatically agree with Messrs. Limbaugh and Sowell about this president's attitude toward America as it exists and as the Founding Fathers intended it. That is why my own answer to the question, "What Happened to Obama?" is that nothing happened to him. He is still the same anti-American leftist he was before becoming our president, and it is this rather than inexperience or incompetence or weakness or stupidity that accounts for the richly deserved failure both at home and abroad of the policies stemming from that reprehensible cast of mind.