THE BEST OF THE WEB TODAY/ THE WALL STREET JOURNAL ONLINE

Will Newt Gingrich be the next president of the United States?


Back in the spring, when his campaign seemed to be imploding in hilarious fashion (if you go to the link, be sure to read the last item as well as the first), it was a question nobody was asking. Over the past few weeks, however, Gingrich has become either the main GOP challenger to front-runner Mitt Romney or the front-runner in his own right.

Among the four states with the earliest nomination contests, Romney leads only in New Hampshire. (As Nate Silver notes, Romney also had a comfortable Granite State lead a month before the 2008 Iowa caucuses, but he went on to lose to John McCain.) Gingrich is now up in Iowa, South Carolina and Florida. Let's focus on the last, since it's a crucial swing state with 29 electoral votes.

Last week a survey of likely Republican primary voters from Public Policy Polling, a respected Democratic firm, found Gingrich ahead in Florida with 47%, to just 17% for Romney. Herman Cain, now an ex-candidate, took 15%, and nobody else topped 5%.

The same firm's general-election poll of registered voters however, gives Romney the advantage as an opponent to President Obama. The president leads the former Massachusetts governor by just 45% to 44%, "and given that the undecideds skew largely Republican he'd probably lose to Romney if the election was today," declares the PPP press release. But Obama leads Gingrich 50% to 44%. Among independents, Romney leads Obama by a point, whereas Gingrich trails the president by seven.
PPP declares: "This Florida poll is just one more piece of evidence: if the Republicans actually want to beat Obama they need to nominate Romney, love him or not."

That seems to us wildly overconfident, both in Obama's political strength and in the predictability of an election that is still 11 months off. Even so, we agree with PPP to the extent that we would say Romney is the safer candidate for the GOP because more independents see him than Gingrich as an acceptable alternative.

To be sure, Gingrich convinced many Republicans to give him a second look, mainly by performing very well in debates as Michele Bachmann and Herman Cain were flaming out, and Tim Pawlenty and Rick Perry failing ever to ignite. Why? The answer is not entirely obvious.

The main Republican objection to Romney is that he is inconstant, and thus not a true conservative. But is Gingrich really any better in this regard? In the past he has endorsed the individual mandate for medical insurance and even made a global-warmist video with Nancy Pelosi in which the two ex-speakers share a love seat!

Gingrich has cited his record as speaker, during which he led the House in producing welfare-reform legislation, balanced budgets and a cut in capital gains taxes. But Gingrich was the beta to Bill Clinton's alpha, and all of these measures were in the service of Clinton's positioning himself as a centrist. When Clinton and Gingrich clashed over the budget in 1995-96, Clinton won handily (unlike the much weaker Obama, who started losing confrontations with Congress before the GOP even took over the House). 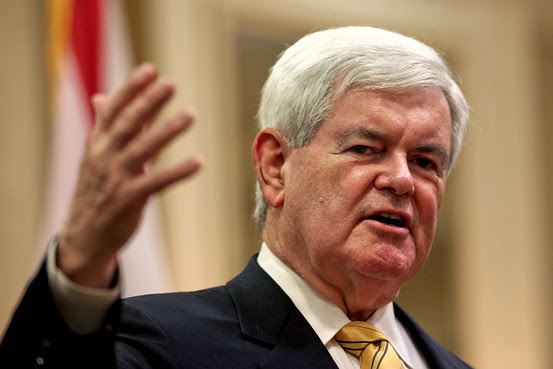 The next president? Just maybe.


It seems to us that Gingrich's appeal to the primary electorate is best explained by reference to an earlier period in his career: 1989-94, when he was House minority whip. He was an extremely effective insurgent leader, helping to bring down two Democratic leaders, Speaker Jim Wright and Majority Whip Tony Coelho, by calling attention to their ethical problems.

As the Orlando Sentinel reported in May 1989, just after the latter announced his departure: "House Democratic whip Tony Coelho said Sunday that Republican whip Newt Gingrich was trying to destroy the Democrat-controlled House in order to rebuild it with a GOP majority." Five and a half years later, mission accomplished.

It seems to us that what has appealed to Republicans about Gingrich in this year's debates has been his willingness to challenge the assumptions of the (usually) liberal moderators. In one of the best examples, noted by NewsBusters.org, the ex-speaker "schools" Scott Pelley of CBS on the laws of war.

As it happens, Gingrich was defending the Obama administration for having killed al Qaeda terrorist Anwar al-Awlaki. The point, however, is that he was aggressive in refusing to accept Pelley's smug presumption of its own moral and intellectual superiority--a presumption that rankles conservatives, that is very common among the leaders of cultural institutions, and that Obama very much personifies.

Matt Lewis of the Daily Caller summarizes it as well as we've seen anybody do:


A lot of people I talk to can't fathom why Newt Gingrich is actually winning. The latest narrative--and I think there's truth in it--is that voters are hungry for someone who will "take it to Obama." Clearly, Gingrich's debating ability is key. Republicans are champing at the bit to see him debate Obama. But I think this urge is deeper than a desire to simply watch him beat up or attack the president rhetorically--they also want him to intellectually flatten him--to out-debate him.


The left has a different set of explanations for Gingrich's rise. Former Enron adviser Paul Krugman says it's because GOP voters are "totally clueless" and "committed to demonstrably false beliefs." E.J. "Baghdad Bob" Dionne says the "Republican establishment" has "sold its soul to the Tea Party" and "sat by silently as extremist rhetoric engulfed the GOP." Krugman colleague Charles Blow says it's because the GOP is "bankrupt of compassion and allergic to accuracy."

While these statements are all foolish and obnoxious, they fit right into our thesis. Gingrich is popular among conservatives because he refuses to be browbeaten by liberal bullies. One can easily imagine him bringing out the least attractive qualities of Obama, who does not like to be challenged.

On the other hand, it could backfire. Gingrich has a tendency to bully back rather than respond with weary condescension à la Ronald Reagan ("there he goes again"). He may need to modulate his tone if he is to win over those skeptical independents.