I love Marco Rubio!  He has all the qualifications to be President of the United States some day, except that he is probably not eligible because his father was not a citizen of the United States when Marco was born and therefore he is not a Natural Born Citizen within the meaning of Article II of the United States Constitution.   For that reason alone I welcome the addition of Luis Fortuno to the list of possible future candidates for the Presidency.

Puerto Rico's Republican governor would be a fine choice for vice president.

He's young, dynamic, and well-spoken. As a Republican vice presidential nominee, he could help with Latino voters in 2012.

And he's not Marco Rubio.

His name is Luis Fortuño, and he's part of a rising generation of Republicans pushing pro-growth, small-government agendas. Like many of these men and women, Mr. Fortuño is a governor. What makes him striking is that he's governor of an American territory, Puerto Rico, rather than an American state.

"I'm flattered," says Mr. Fortuño when a reporter pitches the vice presidency to him. "But what I've done in Puerto Rico hasn't been about my own re-election or advancement. It been about doing what I think is right."

Spend any time with Mr. Fortuño, and you will learn that high on his list of doing what's right is ensuring government lives within its means. When he was elected governor in 2008, one out of three Puerto Ricans were working for the government. When he was sworn in, there wasn't enough money to meet the payroll. In response, Mr. Fortuño cut spending and 20,000 government workers, provoking angry protests.

The governor stood his ground. Earlier this year, he signed a bill slashing individual and corporate taxes—and he says there's much more to do. For example, because Puerto Rico is not connected to the U.S. electric grid, it gets 68% of its electricity from oil (against about 1% for the U.S.), making its economy especially vulnerable to high oil prices. Just last week, Mr. Fortuño won a huge victory when the Army Corps of Engineers issued a favorable preliminary ruling on a natural-gas pipeline that would run 92 miles from southern Puerto Rico toward San Juan. 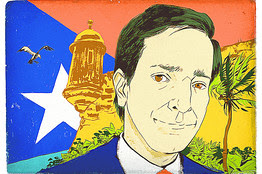 As a student at Georgetown, Mr. Fortuño subscribed to the conservative magazine "National Review." In 1980, he was so inspired by Ronald Reagan's message that he volunteered to stuff envelopes for the Gipper's presidential run. Twenty-five years later, he returned to Washington as a Republican representing Puerto Rico in Congress.
Yet as historic as he may be for Puerto Rico, Mr. Fortuño offers even greater possibilities for the Republican Party. Ever since JFK's 1961 speech about transforming the Western hemisphere, just about every U.S. president has spoken of paying more attention to our own backyard. In that enterprise, few vice presidents would come with Mr. Fortuño's experience in the region—or the ability to speak about free markets in a way that resonates with our neighbors to the south.


For his part Mr. Fortuño notes he's only one of many Latino Republicans in public life today. He points to Florida's Sen. Rubio, Nevada Gov. Brian Sandoval and New Mexico Gov. Susana Martinez as just a few of the rising stars. Latino voters, he says, are hard working and patriotic, noting that Puerto Ricans serve in greatly disproportionate numbers in the U.S. military.


"We Republicans don't have to run away from our principles," he says, "but we don't have to sound anti-Hispanic either." By that he means talk about immigration should be focused on fixing the legal system—not complaining about those who come seeking opportunity.


Of course, a Fortuño vice presidential nomination is not without its possible downsides. For all the governor's reforms, Puerto Rico's economy continues to struggle. (Ronald Reagan and Mrs. Thatcher also had some grim years before their own economies picked up.) The murder rate is approaching record levels, largely because a crackdown on America's southern border is pushing much of the deadly drug and weapons trade through the Caribbean.


Though there's no constitutional prohibition against Mr. Fortuño's serving as U.S. president or vice president—Puerto Ricans have been American citizens since 1971—perhaps the biggest issue is simply that the governor is not well known here. In our media-driven age, that means he would likely face a ferocious public vetting like the one directed at Sarah Palin when she was announced as John McCain's running mate. In other words, some of the same things that are exciting about a Fortuño VP nomination could make it a distraction.


Then again, the payoff is potentially much higher than the risks. It is no dismissal of Marco Rubio (who has said he's not interested in the VP slot) to observe that, as a Puerto Rican, Mr. Fortuño might enjoy greater appeal among the broad Latino community than a candidate from a traditional GOP constituency such as Cuban-Americans. In short, he might inspire a critical and fast-growing demographic to give the Republican Party another look.


In a 2012 contest where the big question is the proper size and reach of government, Mr. Fortuño would more than hold his own. Still, when asked point-blank about whether he'd accept a vice-presidential nod, Mr. Fortuño talks about any number of things: the attraction of an opportunity-driven society, the mistake of equating Latinos with Big Government, the aspirations that all Americans share.