PUBLIUS SPOKE OUT ON THE SUBJECT OF JUS SOLIS CITIZENSHIP 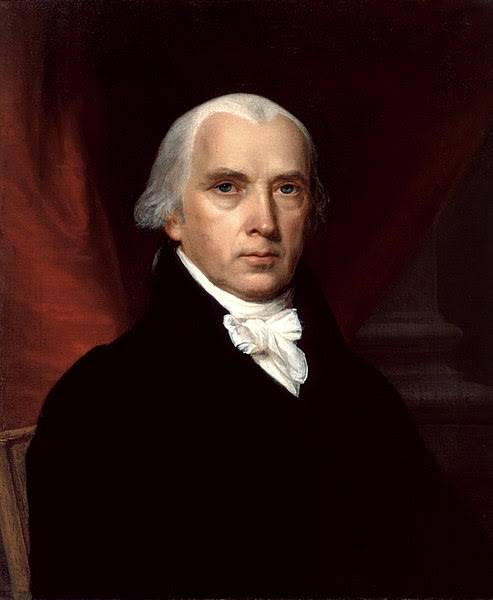 By act of Congress late in 19th Century any person born on the soil of the United States is a citizen of the United States regardless of the nationality of the child's parents, but that child is not a natural born citizen if both parents were not themselves citizens at the time of the birth.

Leo Donofrio, posted the article below on his blog Natural Born Citizen showing that Publius (who was probably President James Madison) strongly stated British Common Law did not apply in a case involving James McClure.

I was recently forwarded an incredibly amazing article from the October 10, 1811 edition of The Alexandria Herald newspaper.  RXSID of Free Republic sent it with a brief note, stating, “Check out this case.”  The Herald article is entitled, Case of James McClure.  The author is…PUBLIUS.
Publius was the pseudonym used by Alexander Hamilton, James Madison, and John Jay, for their anonymous authorship of The Federalist Papers.  By 1811, Hamilton was dead and Jay retired.  My research leads me to believe that the article was written by James Madison, but this has not been conclusively established yet.  Regardless of authorship, Madison was President at the time the article was written, and it discusses the official position of his administration denying U.S. citizenship based upon simple birth in the country.
The official position of the Madison administration was that persons born in the U.S. to alien parents were not U.S. citizens.  This was the ruling concerning James McClure, despite the fact that his parents had been settled in the country for many years prior to his birth.  The article makes clear that the United States Minister to France, General Armstrong, refused diplomatic protection for McClure by denying he was a citizen of the United States.
This was the official decision despite McClure having been born in South Carolina in 1785 to a father who was naturalized months later in 1786.  Armstrong informed the French authorities that the man was not a U.S. citizen, and McClure was left in French custody.  The article by PUBLIUS indicates that Armstrong might have mis-applied the 1802 Naturalization Act, but PUBLIUS also makes clear that McClure was not a citizen by virtue of his native birth in South Carolina: 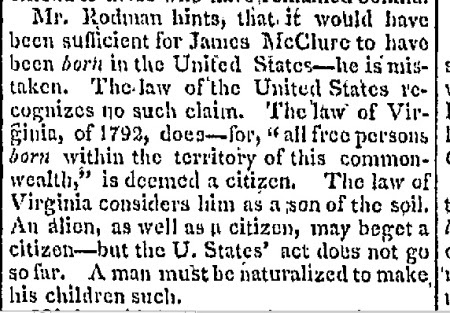 There was no statute in South Carolina in 1785 which granted citizenship to persons born there similar to Virginia’s statute mentioned in the article by PUBLIUS.  Simply being a “son of the soil” was not enough, and this evidence repudiates the contention that the British common law had been adapted in all of the states after the revolution.  Since there was no statute in place making those born in South Carolina citizens, McClure was not held to be a native-born citizen.  That argument was utterly rejected throughout the affair.
The article goes on to question whether the 1802 act is defective in that PUBLIUS seems to believe citizenship ought to be revoked for naturalized persons who return to their original country and establish domicile there again.  But the article makes clear that Madison’s administration steadfastly denied that simple birth in the United States was enough to establish citizenship.  This, of course, discredits the conclusions of Justice Horace Gray in U.S. v. Wong Kim Ark, as well as the infamous New York Chancery opinion of Lynch v. Clark.  Both cases contain erroneous assumptions that the British common law rule of jus soli governed citizenship from the very genesis of the United States.
I tracked down the original article published in the Richmond Enquirer on October 1, 1811, which was then republished in The Alexandria Herald on October 10, 1811.  Both of these newspapers were published in Virginia, Madison’s home state.  Furthermore, the PUBLIUS penned article was the grand finale of nearly a year-long argument which went viral in various newspapers of the day starting in January 1811.
I have been up and down the East Coast tracking down the remaining newspaper articles on this as well as other supporting historical information.  I have also consulted with professionals and am preparing an extensive section for my forthcoming book which details everything that has been unearthed.
The whole story cannot be understood by way of online searches.  The internet is barren on this case.  Some of the necessary information isn’t even available in the Library of Congress or National Archives.
Here are the images from the Alexandria Herald and Richmond Enquirer.  The Herald scan is much easier to read than the Enquirer scan.
Leo Donofrio, Esq.
[See commenting rules here.]

Like
2 bloggers like this post.
This entry was posted on December 28, 2011 at 10:14 PM and is filed under Uncategorized . You can follow any responses to this entry through the RSS 2.0 feed You can skip to the end and leave a response. Pinging is currently not allowed.