HOW (NOT) TO WIN FRIENDS AND INFLUENCE PEOPLE BARNEY FRANK may be the only member of Congress who has ever made headlines for not acting like a jerk.
When the longtime Massachusetts representative found himself last year facing -- for the first time in decades -- a surprisingly strong Republican challenge, journalists noticed something strange: He wasn't being as nasty as usual. He wasn't responding to questions with his trademark put-downs. He wasn't condescending to critics with quite as much sneering contempt.
"Barney Frank reinvents himself as a nice guy," wrote Jonathan Strong in a story for The Daily Caller. The Boston Herald's Margery Eagan, "bracing to get hammered" when she asked Frank some questions, was amazed when, instead of insulting or berating her, he answered her questions "almost diplomatically."
But Frank's unwonted restraint vanished on election night. In what may have been the most graceless victory speech in US congressional history, he savaged the Herald, accused Republicans of engaging in "vituperation [and] anonymous smears," and proclaimed his re-election "a victory for a concept of government which eschews anger and vitriol."
Which was quite a proclamation, coming from someone who is as renowned for his invective and browbeating as for his liberalism and smarts. When Frank eventually goes to his eternal reward – and I wish him many more years of activity and good health – it's safe to assume that the words "He eschewed anger and vitriol" will not be engraved on his monument.
Frank said last week that he plans to retire when his current term ends at the end of next year. That made him the 24th House incumbent to announce that he won't seek re-election. But only in Frank's case did the media coverage include printing roundups of his "oftentimes acerbic comments," or collecting tweets from "the many journalists who have felt his wrath," or posting a greatest-hits reel of Frank on the House floor, belittling and excoriating his Republican colleagues.
Politics and passion have always gone together, and all other things being equal, a quick-witted congressman with strong views and the ability to defend them is preferable to a colorless drudge. No one has ever doubted Frank's intelligence or wit, and it isn't only liberals who could appreciate his gift for wry retorts. ("My colleagues on the other side have decided to adopt a Marxist idea," he said during one House debate. "The Marx in question, of course, is Chico.")
But it's one thing to be a quotable curmudgeon. It's something quite different to be a bully.
Frank has long been "one of the most notorious bullies" on Capitol Hill, remarked Dana Milbank in The Washington Post. The Massachusetts Democrat will be remembered not just for his left-wing politics or as the first openly gay member of Congress, but also for his "gratuitous nastiness," as Milbank put it – the public tongue-lashings, the spiteful mockery, the caustic abuse of aides, the almost routine willingness to tell people how stupid they are. This isn't just impatience; Frank plainly takes a certain pleasure in publicly humiliating his victims. It isn't hard to find stories of Frank berating someone to the point of tears. But I have never heard of him apologizing for it afterward. 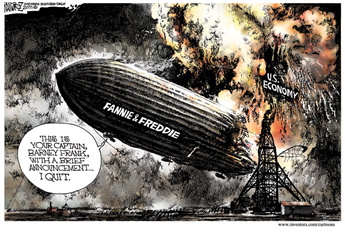 Ironically – or maybe it's just human nature – Barney Frank has no trouble condemning in others the ugly behavior to which he so often resorts. He has been unsparing toward Newt Gingrich, for example, describing him as having "made a career out of attacking people around here and trying to rip them apart." I have heard him caution his allies on the left about the importance of "showing a bit of respect for cultural values with which you disagree," and admonishing them not to "call people bigots and fools just because you disagree with them."
But when Frank – who often condemns the sour tone in Washington and Congress -- was politely asked on NBC's "Today" show last week whether he might have contributed to the bitterness in the Capitol, his answer was no. Instead, he nastily scolded the anchor for her "negative approach."
Frank, who has been my congressman for nearly 30 years, comes from a family of outspoken, opinionated, liberal Democrats. His sister, Ann Lewis, was a senior Democratic Party strategist and an adviser in the Clinton White House, while their mother, the late Elsie Frank, was president of the Massachusetts Association for Older Americans. Over the years, as it happens, I had the opportunity to participate in debates or other public forums with each of them. In my experience all three were skilled advocates, quick on their feet and passionate in their views. But neither Mrs. Frank nor her daughter felt it necessary to make cutting insults about anyone's intelligence, or to treat a disagreement about politics as an excuse for vituperation.
I wish I could say the same about their son and brother.
(Jeff Jacoby is a columnist for The Boston Globe. His website is www.JeffJacoby.com).
Posted by Leo Rugiens at 4:39 AM