WHERE IS GENERAL GEORGE S. PATTON WHEN WE NEED HIM ? 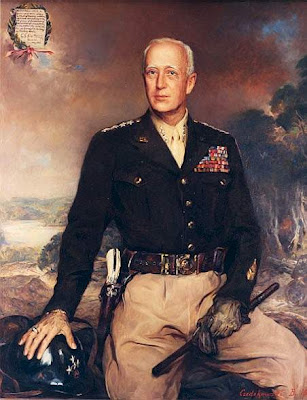 There’s an immeasurably deep cleavage between left and right in America, illustrated vividly in the way Americans regard the Benghazi scandal and outrage. It’s in the DNA.


Democrats generally and liberals in particular can’t understand what the noise from Benghazi is about, though they’re willing to concede that the deaths of the American ambassador and three colleagues was a shame and maybe even a tragedy. The families of the dead deserve the nation’s thoughts, and even the prayers of the guns-and-religion clingers, and if any of the families can find condolences in mass-produced clichés they’re welcome. But whatever bad happened in Benghazi was a bureaucratic failure and the word at the White House is that bureaucrats can fix it.


Republicans generally and conservatives in particular can’t figure out why the ambassador and his three luckless colleagues were allowed to twist slowly, slowly in the toxic smoke of the burning consulate, and can’t understand why everyone else is not as outraged as they are. How much is a human life reckoned to be worth?


The left, which weighs everything on the scales of political expediency, can’t understand why American “special operations” standing by in Tripoli were so eager to fly to the rescue. Liberals and lefties can’t understand why, after being told to stand down, the soldiers were “furious,” as Gregory Hicks, the No. 2 diplomat in Benghazi, eloquently described them in his testimony to the House committee inquiring into the episode. The ambassador and his colleagues died pleading for help that never came because the president’s men and women were too surprised, too timid, too frightened to send it. “None of us should ever have to experience what we went through in Tripoli and Benghazi,” Mr. Hicks told the panel.


Ordinary Americans have thrilled with pride to the stories of blood and flesh spent to attempt the rescue of the helpless, whether the exploits of the famous 7th Cavalry riding through heat and choking dust to save the settlers and their families on the plains, or George S. Patton’s Third Army racing through ice and snow to relieve the 101st Airborne at Bastogne at Christmas 1944, or the Marines’ fighting retreat from the Chosin Reservoir in similarly frozen Korea in the winter of 1950. Soldiers throughout the nation’s history have redeemed the promise that no one will be left behind. The retreat from the reservoir, though not a triumph of arms, is rightly regarded as a special moment in the history of the Marine Corps. The photographs and newsreel footage of the Marines bringing out their wounded and frozen dead, stacked on their tanks, are iconic reminders of the debt fighting men owe to each other. Somebody tried.


The besieged defenders of Bastogne owed their rescue to Patton, often reckless and always spoiling for a fight. The Americans were trapped at Bastogne, having been ambushed by the Germans in a last attempt to force a negotiated surrender. They seemed on the lip of success. Patton promised the skeptical Gen. Dwight D. Eisenhower, the supreme allied commander in Europe, that he could turn his three divisions around overnight and fight their way more than a hundred miles to the rescue: “The kraut’s got his head stuck in a meat grinder, and this time I’ve got hold of the handle.” Ike gave the word, Patton gave the order, and Bastogne was soon relieved. Thousands of Americans were saved and the Germans never again mounted a sustained offensive. Somebody tried.


This is the lesson of the fighting spirit that seems no longer prized in certain precincts in Washington. There’s no evidence that this White House appreciates courage, reckless or otherwise, and the can-do spirit that saves causes otherwise lost. Barack Obama prefers to lead from behind. He’ll take the credit if everything works out OK - and if nothing good works out, he’ll make a nice speech (though lately even his gifts of gab have departed from him). He’s willing to mock the guns-and-religion clingers and still hasn’t figured out where the nation’s enemies are.


Hillary Clinton, celebrated at the Clinton White House for throwing lamps and for her contempt for anyone in uniform, has always had trouble recognizing enemies, too. (She thought it was the vast right-wing media conspiracy.)

Maybe we can’t blame these folks. It’s in the DNA. But a nation won’t long survive inability to recognize enemies and indifference to incompetence. It has to defend itself from all enemies, foreign and domestic. Let the investigations begin.

Wesley Pruden is editor emeritus of The Washington Times.