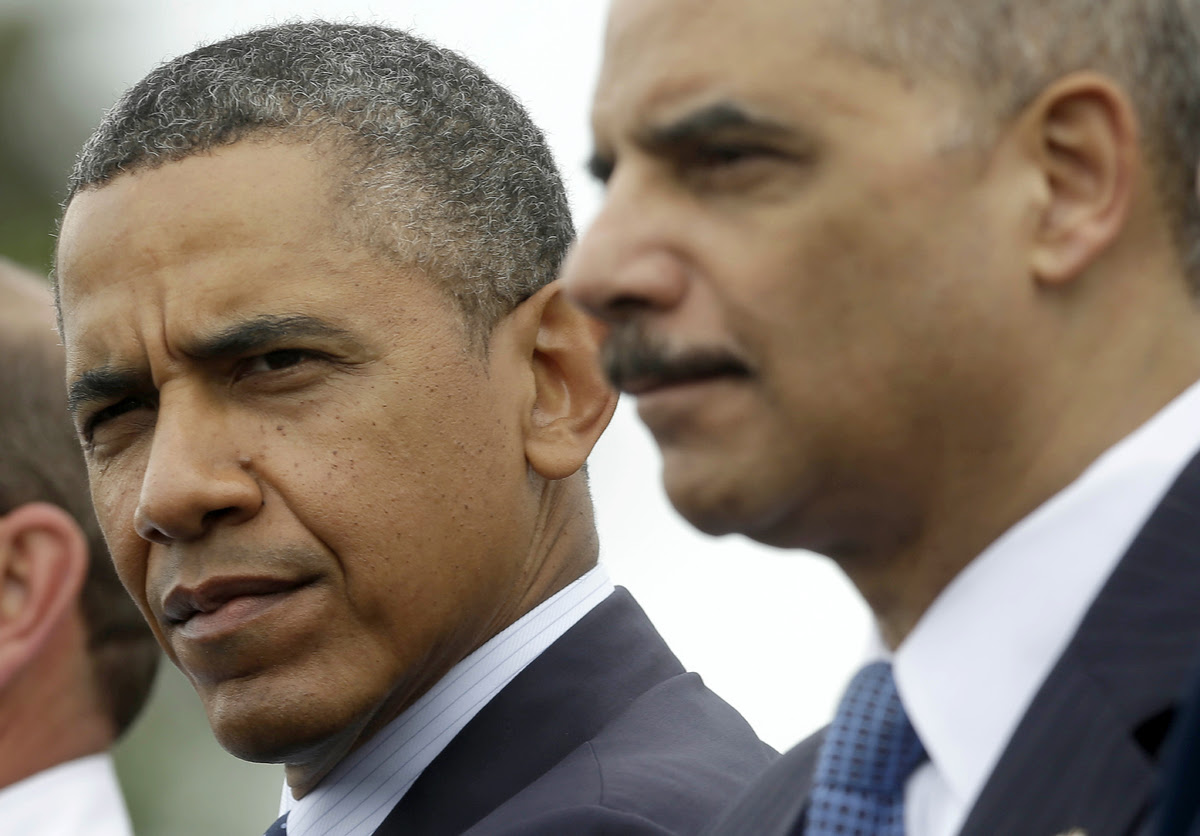 FUNERAL RITES FOR A PERFIDIOUS PRESIDENCY

Drip, drip, drip. And then the deluge.

After that the roof falls in. The perfect storm dashing Barack Obama’s second term onto the rocks is not the consequence of a sudden squall. This storm has been a long time coming.


The White House still doesn’t get it. Sending the president out to make another speech won’t change anything. Calling in a favored few to listen to more bloviating won’t do it, either. Neither will sacking Eric Holder, which is an idea whose time has come, but that would only buy a little time, with the emphasis on little.


The president may be tempted to cast the perfect storm as a matter of national security. When his speech to the National Defense University, declaring that the war against the terrorists was over because he had vanquished all the bad guys, landed with the thud of a noisy dud, he invited a gaggle of media elites to the White House for a session of the familiar argle-bargle. That didn’t work then, and it won’t work now. Mr. Obama’s administration is the enemy “foreign and domestic” the founding documents warned us about.


An invitation to the White House is ordinarily the invitation no good citizen declines without a very good reason. If a president, or one of his deputies, summons a citizen to come to the aid of the government, a good citizen catches the next streetcar to Pennsylvania Avenue, even if the streetcar is a bus. This time it’s fashionable to say thanks, but no thanks. Eric Holder’s invitation to media executives to “air concerns and exchange ideas” is not necessary because if he wants to hear the concerns he can read about them in the morning papers. Meetings to “ensure that First Amendment rights are respected by the Department of Justice” are not necessary, either, nor are conversations with news executives, lawyers and intelligence and investigative ‘experts’.”


The First Amendent needs no explanatory help from politicians, lawyers or anyone else. The language of the amendment, the cornerstone and guarantor of all the other rights of Americans, is as plain as the language of the Gospel, written so that the humblest among us can understand it. Presidents and their administrations have understood the words of the First Amendment for two centuries, with the further understanding that trifling with the words and meanings is always reckless and foolish.


Hiring new public-relations help for Eric Holder is not the answer to the president’s troubles, though a new flack is always the aspirin a president reaches for when he feels a presidential headache coming on. Mr. Obama’s headache is not merely the messenger, but the message that everyone, at last including the sleeping beauties of the media, now hears loud and clear.


The president’s headache is compounded by the harsh reality that the organs of mainstream media, for so long the altar boys of the president, have become allies of partisans on the right whether they like it or not. Facts are stubborn. When Republicans in the House of Representatives assail Eric Holder for targeting journalists to plug leaks, even The New York Times has to take grudging notice. The canard that critics of Mr. Obama are racists by definition has been rendered permanently “inoperative.”


The letter from the chairman and a senior member of the House Judiciary Committee asking Mr. Holder to explain the contradiction between his sworn testimony and reliable news accounts is the red meat journalists usually crave. A fortnight ago Mr. Holder told the committee that he had never taken part in any pursuit of a journalist for criminal prosecution, and it would not be “wise policy” to do that. No equivocating there. But Reuters news agency reports that Mr. Holder had approved the search warrant to retrieve email archives of Fox News, and approved a subpoena for the network’s telephone records.


Mr. Obama and his administration face a long, hot summer of charge, countercharge, whistles and whistleblowing. He’ll need more than aspirin. Obamacare as it is revealed looms as another storm.


All of this is exciting news for prospective Republican candidates. Incumbent presidents nearly always take a licking in the midterm congressional elections, particularly in their second terms. The president can take hope, thin as it may be, that Republicans are capable as always of blowing slam-dunk opportunities.


Republicans should have taken the Senate again by now, but insist on nominating Doofus and his little brother Dumber. They must avoid nominating aspiring gynecologists this time, and stick to candidates who want to come to Congress for the funerary rites of a misbegotten presidency.