THE GULF OIL SPILL IT TOO MUNDANE A MATTER TO OCCUPY THE ATTENTION OF OBAMA. NOW GOLF? THAT IS ANOTHER MATTER 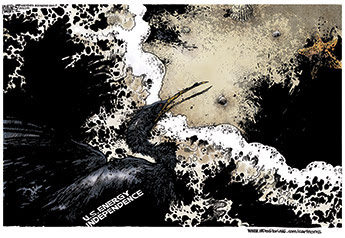 Barack Obama doesn't do the mundane.
He was sent to us to do larger things.
You could see that plainly in his Oval Office address on the gulf oil spill.
He could barely get himself through the pedestrian first half:
a bit of BP-bashing, a bit of faux-Clintonian "I feel your pain," a bit of recovery and economic mitigation accounting.

It wasn't until the end of the speech -- the let-no-crisis-go-to-waste part that tried to leverage the Gulf Coast devastation to advance his cap-and-trade climate-change agenda -- that Obama warmed to his task.

Pedestrian is beneath Obama. Mr. Fix-It he is not. He is world-historical, the visionary, come to make the oceans recede and the planet heal.

How? By creating a glorious, new, clean green economy. And how exactly to do that? From Washington, by presidential command and with tens of billions of dollars thrown around. With the liberal (and professorial) conceit that scientific breakthroughs can be legislated into existence, Obama proposes to give us a new industrial economy.

But is this not what we've been trying to do for decades with ethanol, which remains a monumental boondoggle, economically unviable and environmentally damaging to boot? As with yesterday's panacea, synfuels, into which Jimmy Carter poured billions.

Notice that Obama no longer talks about Spain, which until recently he repeatedly cited for its visionary subsidies of a blossoming new clean energy industry. That's because Spain, now on the verge of bankruptcy, is pledged to reverse its disastrously bloated public spending, including radical cuts in subsidies to its uneconomical photovoltaic industry.

There's a reason petroleum is such a durable fuel. It's not, as Obama fatuously suggested, because of oil company lobbying but because it is very portable, energy-dense and easy to use.

But this doesn't stop Obama from thinking that he can mandate into being a superior substitute. His argument: Well, if we can put a man on the moon, why not this?

Aside from the irony that this most tiresome of cliches comes from a president who is canceling our program to return to the moon, it is utterly meaningless. The wars on cancer and on poverty have been similarly sold. They remain unwon. Why? Because we knew how to land on the moon. We had the physics to do it. Cancer cells, on the other hand, are far more complex than the Newtonian equations that govern a moon landing. Equally daunting are the laws of social interaction -- even assuming there are any -- that sustain a culture of poverty.

Similarly, we don't know how to make renewables that match the efficiency of fossil fuels. In the interim, it is Obama and his Democratic allies who, as they dream of such scientific leaps, are unwilling to use existing technologies to reduce our dependence on foreign (i.e., imported) and risky (i.e., deep-water) sources of oil -- twin dependencies that Obama decried in Tuesday's speech.

"Part of the reason oil companies are drilling a mile beneath the surface of the ocean," said Obama, is "because we're running out of places to drill on land and in shallow water."

Running out of places on land? What about the Arctic National Wildlife Refuge or the less-known National Petroleum Reserve -- 23 million acres of Alaska's North Slope, near the existing pipeline and designated nearly a century ago for petroleum development -- that have been shut down by the federal government?

Running out of shallow-water sources? How about the Pacific Ocean, a not inconsiderable body of water, and its vast U.S. coastline? That's been off-limits to new drilling for three decades.

We haven't run out of safer and more easily accessible sources of oil. We've been run off them by environmentalists. They prefer to dream green instead.

Obama is dreamer in chief: He wants to take us to this green future "even if we're unsure exactly what that looks like. Even if we don't yet precisely know how we're going to get there." Here's the offer: Tax carbon, spend trillions and put government in control of the energy economy -- and he will take you he knows not where, by way of a road he knows not which.

That's why Tuesday's speech was received with such consternation. It was so untethered from reality. The gulf is gushing, and the president is talking mystery roads to unknown destinations. That passes for vision, and vision is Obama's thing. It sure beats cleaning up beaches.

OBAMA AND THE VISION THING
by Charles Krauthammer
THE WASHINGTON POST
Friday, 18 June 10