SINCERITY WILL NOT STOP MURDERS, AND NEITHER WILL BANNING GUNS 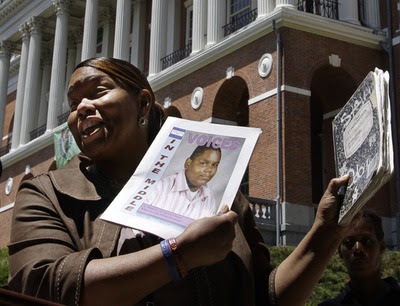 displays a photo of her killed son during a rally in front of the State House in Boston.

Steven Odom was shot to death in October of 2007

by a gunman who police say was aiming at someone else.


It was one of the creepier stories of the week gone by:
The town administrator in Shirley, Mass., was arrested on charges of illegally recording and photographing his town hall co-workers by (among other things) planting a miniature video camera above a toilet stall in the women's bathroom.

Reaction to the Town Hall Peeping Tom was what you would expect. Residents expressed outrage and distress, the accused was arraigned, locks on town buildings were ordered changed, and selectmen began the process of finding a new administrator. But one reaction nobody had was to call for banning or restricting the sale of miniature video cameras. No such call would have been taken seriously, and for good reason: The fact that some criminals might use a camcorder maliciously is not a good reason to penalize the vast majority of people who wouldn't.

By the same token, when someone uses a car to carry out a deadly crime, nobody proposes stringent new curbs on car sales. Nearly 50 homicides in Massachusetts were committed with knives in 2008, according to FBI data, but no lawmaker introduced legislation making it harder for citizens to buy knives. And though each year in the United States, dog bites man (or woman or child) nearly 5 million times, sometimes fatally, anyone can buy a pet dog.

Yet when guns are used with tragic or criminal results, cries for tougher gun control routinely follow.

On the same day the Shirley story broke, a rally was held at the State House to support Governor Deval Patrick's proposed bill limiting Massachusetts gun buyers to one firearm per month. The featured speaker was Kim Odom, whose 13-year-old son Steven was shot dead by a gang member in Dorchester in 2007.

"We are not going to accept the fact that our children die on the sidewalk and it ends there," Odom said with understandable emotion. She invoked the memory of Jaewon Martin and Nicholas Fomby-Davis, two 14-year-old Boston boys who were shot dead just last month. As she spoke, gun-control advocates held signs bearing the image of a handgun with blood dripping from the barrel.

Anyone's heart must go out to Odom; as a parent, I can only imagine the permanent heartbreak of losing a son to murder. I respect Odom's determination to change the conditions that led to her son's death, and honor her for channeling her grief into action.

But if Steven, Jaewon, and Nicholas had been bludgeoned to death with stainless steel pipe or strangled with an extension cord, Odom would not be demanding limits on the right to buy metal pipe or power cords.

It is illogical and unreasonable to treat guns any differently. Like power cords and knives, the vast majority of guns owned by Americans will never be used to take a life. Even when guns are used in crime, overwhelmingly it is not to kill; and against the criminal use of firearms must be set the use of guns to defend against crime. According to Gallup, nearly one of every four Americans keep a gun to protect themselves or their homes. While the frequency with which guns are used defensively is much debated; estimates range from about 110,000 to 2.5 million times per year.

The notion that urban gangs can be deprived of guns by laws limiting their legal sale to one a month is wishful thinking. Criminals can always get guns. They buy them on the black market, they get them out of state, they steal them. Almost by definition, the impact of gun-control laws falls primarily on the law-abiding. That is why gun bans don't prevent murder, and why homicides decline when gun bans are lifted. John Lott, the economist and author of More Guns, Less Crime, notes that the murder rate in Washington, DC, soared after the city banned handguns in 1977. Yet in the two years since the Supreme Court struck down that ban as unconstitutional, murders in DC have plummeted.